Butyric acid promotes the repair of intestinal epithelial cells, strengthens the intestinal mucosal barrier, and can inhibit multiple inflammatory pathways. Butyric acid is also the main energy source of colon epithelial mucosa. The proportion of patients with intestinal butyric acid bacteria decreased, and butyric acid can not be taken directly by mouth, only enema, etc., more painful. Engineered microorganisms enable sustained, long-term drug delivery. Solution: We use the fatty acid synthesis pathway of lactic acid bacteria and Escherichia coli and introduce exogenous TES4 gene can achieve the production of butyric acid with glucose as substrate. Tes4 enzyme has some specificity for tetracarbon fatty acids. When the fatty acid is synthesized to tetracarbon, the enzyme will release it from ACP to obtain butyric acid.

The plasmid PJT was selected for validation and transformed into DH5α (DJT) and Nissle 1917(NJT). Plasmids were transformed into DH5a for plasmid running gel validation. As can be seen from figure 1, the sample band was about 5000 bp, basically conforming to the target band of 4994 bp, which proved that our plasmid transformation was successful. As the plasmid concentration extracted by Nissle 1917 was too low, PCR validation was carried out on the plasmids in NJT, as shown in figure 1. The target band size was 945 bp, and the actual electrophoresis results met the target band size. 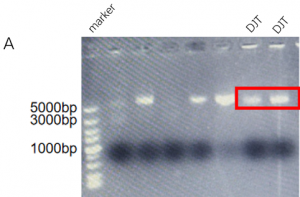 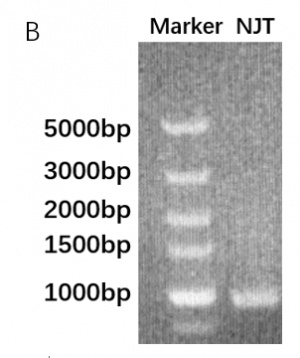 We then verified the engineering bacteria at the protein level. Intracellular protein was extracted from the cultured bacteria and purified by affinity with 6x His tag. The target protein size was 19 kDa. Purification results are shown in figure 2. In the purification, Tes4 protein was not fully combined, and the presence of hybrid proteins with the same size of Tes4 protein led to the existence of bands with the same size in the eluent, which was expected by us. However, due to time constraints, we did not have time to explore the details of elution conditions. Therefore, due to problems in elution gradient, concentration control and sample grafting in the experimental process, there were other hybrid proteins in the eluent, but the purified band of Tes4 protein was clearly visible, which effectively indicated that the engineered bacteria successfully expressed BSH protein. For Nissle 1917, SDS-PAGE also shows clearly visible bands of expression, as shown in red box in figure 2. 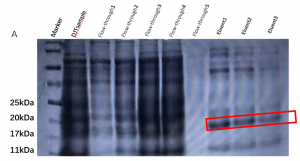 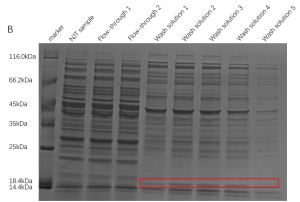 We converted the pJTes4 plasmid DH5a and Nissle 1917 cells broken overnight after the training, the supernatant were collected for detection of butyric acid.In order to be more efficient to test whether our engineering bacteria produced butyric acid, the samples were collected for the derivatization of short-chain fatty acids, as the following figure. The benzene ring is introduced, in order to increase its color, which is easier to be detected at 248 nm. 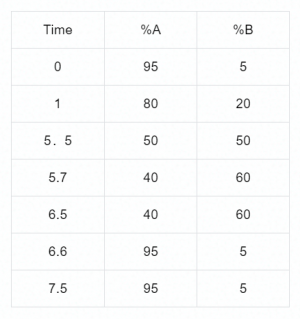 However, the results of wild-type Nissle 1917 chromatogram in the above method showed the shortcomings of this method, which could not completely separate different substances. We hoped to further optimize this method to completely separate substances, but due to time constraints, we failed to optimize the chromatographic conditions, and the chromatogram produced was not ideal.Therefore, we searched for more literature materials to try, and finally we used the following method to separate different short-chain fatty acids, so as to better detect butyric acid.

In the following equation, o-benzyl hydroxylamine was replaced with 3-nitrophenylhydrazine for derivatization, so as to detect the derivatized substance at 355 nm. 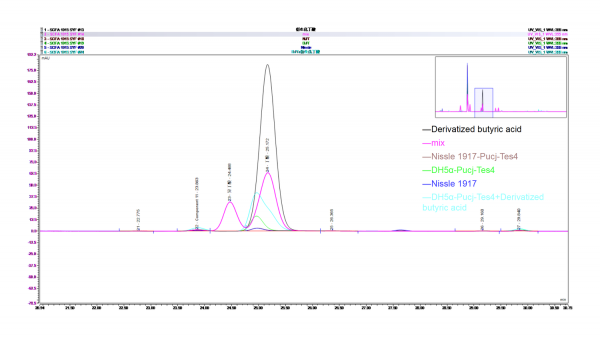