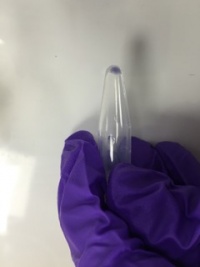 Amsterdam 2020: Relative promoter strength in Synechocystis PCC6803 and UTEX 2973 Vaseduvan and colleagues (2019) aimed to study the difference in strength of promoters in Synechocystis PCC6803 (Synechocystis) and UTEX 2973. 20 previously defined consecutive promoters (including the promoters derived from Part:BBa_J23119, Ptrc10, Ptic10 and Ptac10; Markley, et al. 2015; Huang, et al. 2010; Alberts, et al. 2015) and a L-arabinose inducible promoter originating from Escherichia Coli (PBAD; Abe, et al. 2014) were compared. Besides, they constructed 8 mutant promoters from the Part:BBa_J23119 promoter and the Ptrc10 promoter design (see Figure 1A). The promoters were assembled in a pPMQAK1-T to drive eYFP expression. To the promoter sequences a lac operon (lacO) and ribosomal binding site was added for future experiments (Huang, et al. 2010). eYFP fluorescence measured over 10,000 cells was used to compare the strength of the individual promoters in Synechocystis and UTEX 2973 (see Figure 1B). Besides, the correlation of the expression of the synthetic promoters in both strains was studied (see Figure 1C). Although expression levels are 8 fold higher for UTEX 2973 than for Synechosystis, the strength of the promoters has similar patterns in both strains (R2 = 0.84, see Figure 1C). This information can be used when making constructs for different purposes. 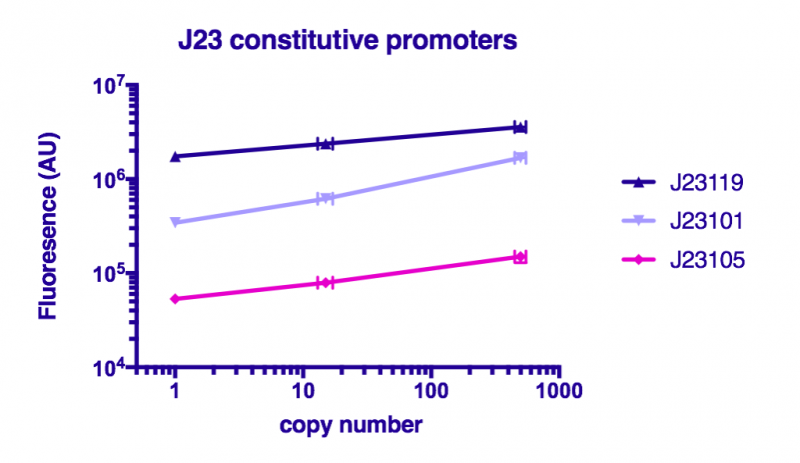 >Internal Priming Screening Characterization of BBa_J23119: Has no possible internal priming sites between this BioBrick part and the VF2 or the VR primer. 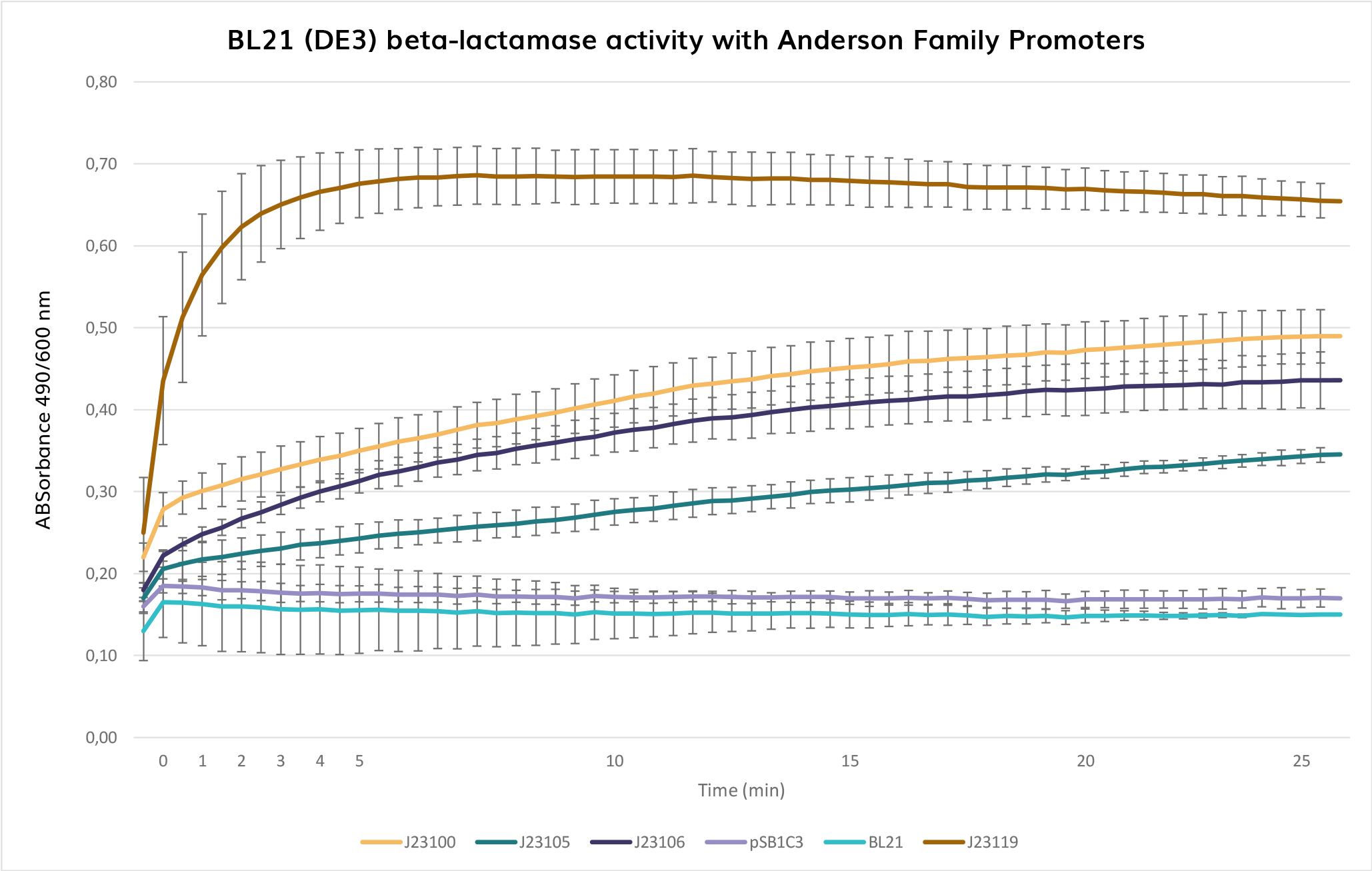 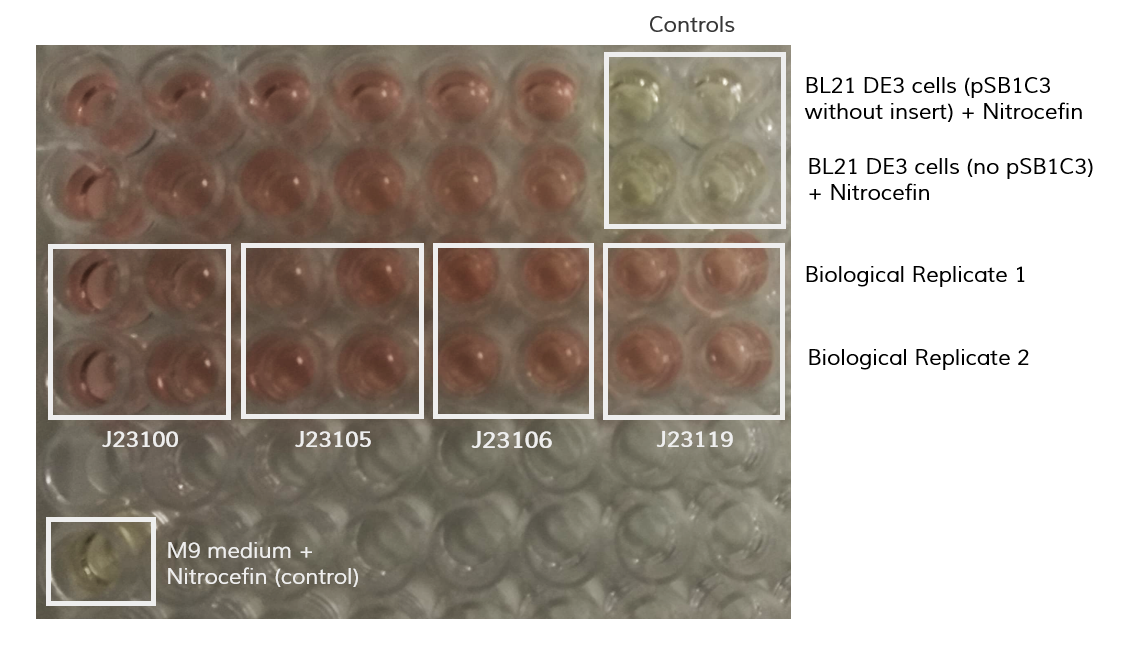 Our team tested several constitutive promoters and rbs combinations for the continuous expression of PET degradation enzymes in E. coli. The J23100 promoter did not work under our experimental conditions. So we found another promoter and J23119 was one of the constitutive promoter candidates. We combined three strong RBSs with this promoter and measured the expression of mScarlet. E. coli transformed with each plasmid was grown under the same conditions and harvested. Escherichia coli expressing mScarlet was sonicated in sonication buffer and the supernatant was transferred to a new e-tube after centrifugation at 4 ° C for 5 min at maximum speed. We measured the absorbance at 569 nm, the maximum absorption wavelength of mScarlet, and at 280 nm for total protein quantification using nanodrops. The experiment was repeated three times and plotted using prism.  These results show that RBS derived from the pDawn vector is important for the expression of mScarlet. 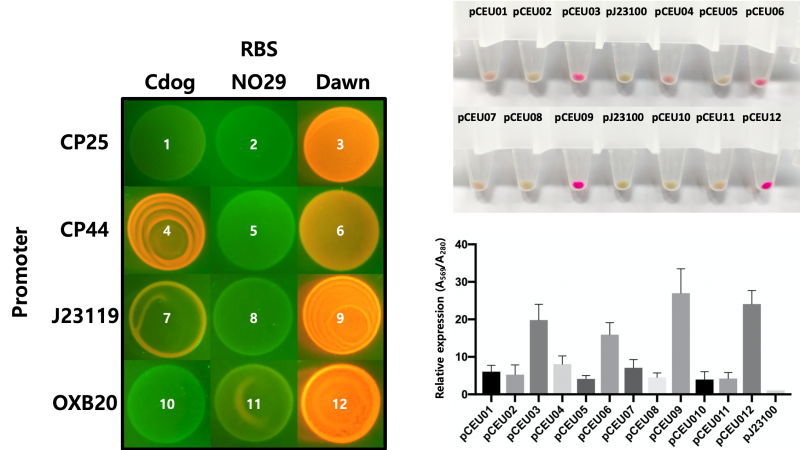 Below, we demonstrate that the newly designed Ribosome Binding Site is appropriately compatible with the Anderson Promoter collection. 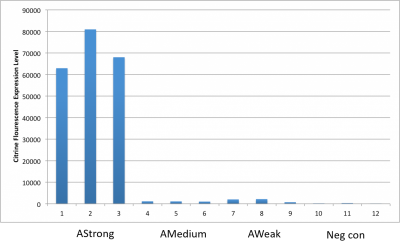 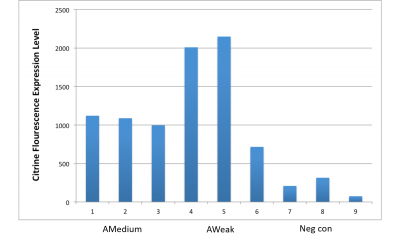 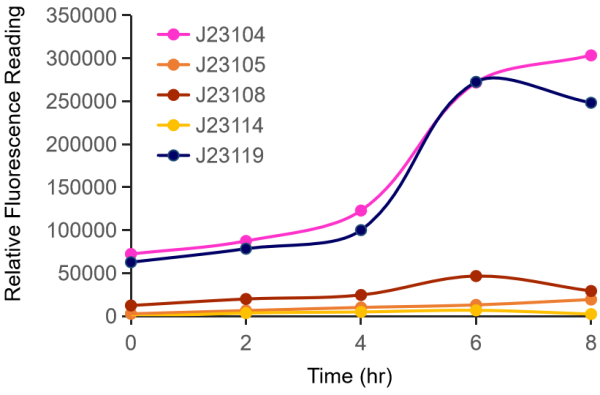