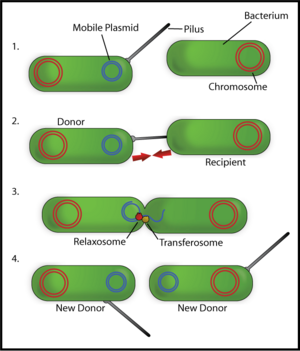 Schematic diagram of bacterial conjugation. 1 - Donor cell produces pilus. 2 - Pilus attaches to recipient cell, brings the two cells together. 3 - The mobile plasmid is nicked and a single strand of DNA is then transferred to the recipient cell. 4 - Both cells recircularize their plasmids, synthesize second strands, and reproduce pili; both cells are now viable donors. Image courtesy of Wikipedia

Bacterial conjugation is the transfer of genetic material between two bacterial cell via direct cell-to-cell contact. Although often incorrectly characterized as the bacterial equivalent of mating, in fact it is simply the transfer of genetic material from a donor cell to a recipient cell. Bacterial conjugation is also known as a "type IV secretion system".