This is an improved version of the RFP generating device BBa_J04450 designed by Team Davidson 2005 that is now RFC10 and RFC25 compatible.


Team Grenoble-Alpes 2017 contributed to the characterisation of this part by testing the time of apparition of fluorescence as a signal of detection.
(--NoreenLouis 20:47, 26 October 2017 (UTC) )

Composite part of the following BioBricks:

Usage as a cloning tool

Team Groningen 2010 reports the usage of this part as a cloning tool. When ligating any part, or part assembly, into any standard backbone that contains this part, the non-restricted and single-restricted backbones that self-circularize will produce red colonies on rich media plates (we use TY). These undesired transformants can than be avoided in the screening for the correct construct. With this method, the backbone desired for a new construct does not need to be purified from agarose gel to decrease the amount of undesired tranformants caused by ligation of the original part present in the backbone. The amount of incorrect transformants depends, of course, on the ratio of backbone (mixed with BBa_J04450) vs. BioBrick insert, the size of the BioBrick insert, and whether the insert is an assembly of two BioBricks. The images below show two ligations with different efficiencies.

Extension of the standard compability to RFC10 and RFC25

This part may be used as a standard insert for RFC10 as well as RFC25 backbones. This improvement became necessary because insertion of BBa_J04450 into a RFC25 compatible backbone leads to the deletion of the desired RFC25 restriction sites that are needed for protein fusions.

The BioBrick BBa_K801100 was characterized by expression of RFP1 (BBa_E1010) in E. coli XL1 blue. Cells were cultivated on a LB petri dish to guarantee sufficient oxygen supply. Afterward the cells were harvested and desintegrated using ultrasonic sound and cell debris was removed using centrifugation. Cell lysate in a cuvette is shown in the figure on the right. The absorption of the cell extract was measured in a photometer. The spectrum recorded is shown in the figure on the left in witch the RFP absorption peakt arroung 584 nm is present as it is described in literature. 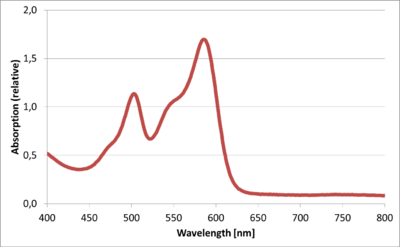 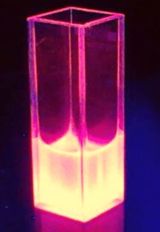 The iGEM team Eindhoven 2021 improved this part by removing the RBS (BBa_B0034) and by replacing this RBS by a sequence containing a 5'UTR and g10-L RBS (BBa_K3972006) to enhance expression of mRFP1. The addition of a 5’ untranslated region (5’-UTR) is already proven to increase expression of the consecutive gene, compared to the standard RBS BBa_B0034 [1]. The research paper of Volkenborn et. al confirms the importance of a 5’UTR sequence for translation initiation [2]. Part BBa_K3972006 is designed to optimally enhance protein expression in prokaryotes and it consists of translation-enhancing DNA, a 10-A-spacer, a g10-L RBS, and an AT-rich region. Characterization methods and results explained in more detail can be found on the part page BBa_K3972005. As can be seen on this page, brighter colonies were grown by E. coli Top 10 cells containing BBa_K3972005, compared to colonies grown in the same type of cells containing BBa_K801100 (Figure 1). Therefore, looking at the grown colonies on the agar plates and the grown small cultures (Figure 2), it can carefully be claimed that faster mRFP1 expression occurs when the RBS (BBa_B0034) is replaced by a 5’UTR RBS (BBa_K3972006). However, further fluorescence intensity measurements need to be executed. 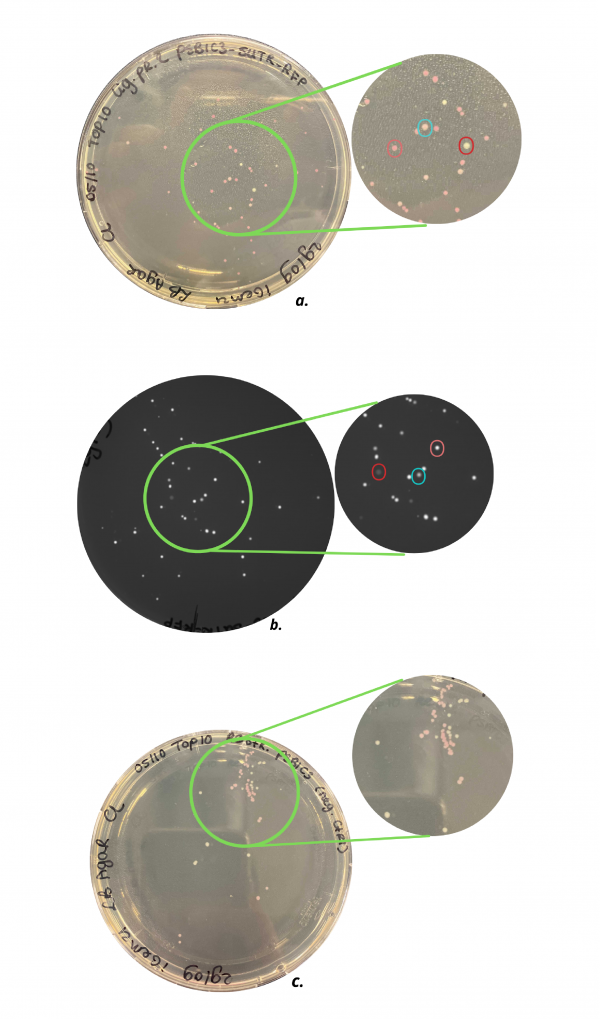 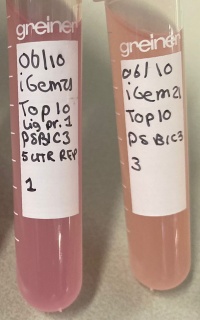