Not Released
Sample It's complicated
Experience: None
-1 Uses
1 Twin
Get This Part 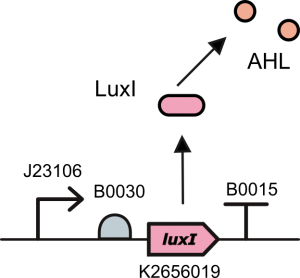 This composite part, together with K3893027, is a component of the intermediate part K3893029 to assemble the release system device (K3893030) of our Agrobactory 593. It is used to constitutively express LuxI protein, the AHL synthase, a fundamental piece of our population oscillator. release device.

This transcriptional unit is composed of the following standardized parts from Valencia_UPV 2018 iGEM Team Part Collection:

Part BBa_K2656019 is the Acyl-homoserine-lactone synthase (LuxI) coding sequence C0161adapted to the Golden Braid grammar and so used with both Biobrick and Golden Gate assembly methods. It was codon-optimized for E. coli.