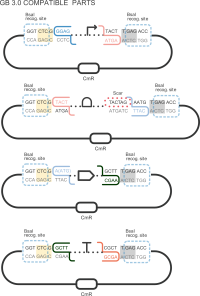 Part BBa_K2656018 is the amil Chromoprotein coding sequence BBa_K592009 compatible with both BioBricks and Golden Braid 3.0 assemply methods. It can be combined with other compatible parts from our Valencia UPV IGEM 2018 Printeria Collection to assemble transcriptional units with the Golden Gate assembly protocol .

In order to carry out a correct characterization of the protein and to be able to use it to make measurements of the different transcriptional units that we have assembled with it, we obtained the absorbance spectrum in the conditions of our equipment. By using this protocol with the parameters of Table 1, Figure 1 was obtained.