The AmyE signal peptide is part of the Signal Peptide Toolbox of iGEM Team TU Dresden 2017 (EncaBcillus - It's a trap!).

We tested this composite part at our lab and showed a successful secretion and extracellular activity by preforming assays for both the supernatant and the lysate of our engineered bacteria (for further information, see methods below). 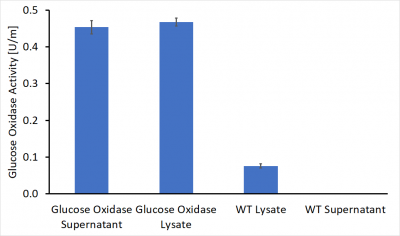 As shown in figure 1, some GOx activity was detected in the wild type bacteria lysate, although this activity was significantly lower compared to the engineered bacteria. A possible explanation for this observation is the presence of other enzymes within the bacteria with similar activity or imprecise lab work.

We ran the discussed samples on SDS-PAGE, and the results are shown in Figure 2. 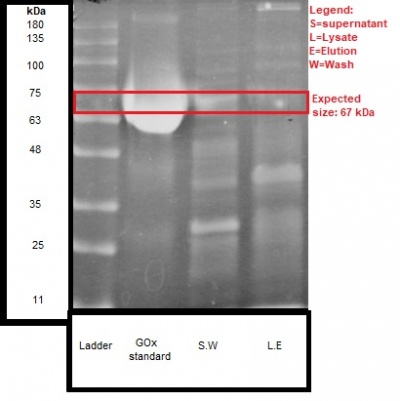 We can see that the expected size of the protein (~67 kDa) was detected both in the lysate and the supernatant of the engineered bacteria.

These results give further confirmation, together with the activity test, that secretion of about 50% GOx enzyme was received. It should be noted that there were no detectable bands in the wild type bacteria samples.

This vector was constructed by Gibson assembly, with the pBE-S commercial plasmid (Takara) that served as a backbone, and eventually transformed into Bacillus subtilis (RIK1285).

The bacteria were cultured over-night at 37┬░C in a shaking incubator (250 rpm), followed by 1:100 dilution. The diluted culture was incubated for another few hours while monitoring the culture turbidity by measuring the O.D600.

When the culture has reached the logarithmic growth phase, the bacterial extracellular and intracellular proteins were separated, after collecting the supernatant and the pellet (followed by lysis, using sonicator).