tat_GFP_RFP is a protein coding sequence coding a fusion protein made up by GFP (BBa_E0040) and RFP (BBa_E1010). In addition, the part contains a tat signal sequence, which is responsible for transport of the protein product to the periplasm of Escherichia coli. To ensure termination two terminators, BBa_B0010 and BBa_B0012, are included in the biobrick. 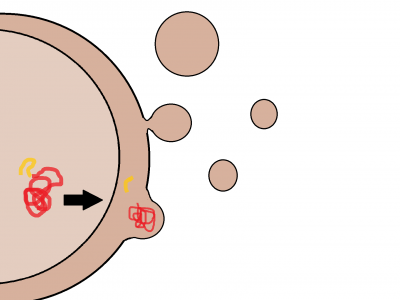 When the GFP-RFP dimer is in the periplasm, some of it should also end up in outer membrane vesicles that all gram negative bacteria (OMVs) produce (see figure 1). Having fluorescent protein in OMVs will make it possible to visualize them.

There were essentially four DNA pieces that we wanted to combine together to make a construct: The tat signal sequence followed by GFP, a small linker region and RFP put into a plasmid backbone. As our cloning techniques rely on overlapping DNA fragments we used mostly primers with overhengs in the PCR reactions. As templates we used the biobricks BBa_E1010 for RFP, BBa_R0040 for GFP, BBa_J01101 for the plasmid backbone and genomic DNA from Escherichia coli strain ER2566 for the tat signal sequence.

The linker region is going to be 36 bp long and will be created by overlapping overhangs on the reverse primer of GFP and forward primer of RFP. The primers for the plasmid backbone is designed to include the TetR repressible promoter BBa_R0040, RBS BBa_R0034 and two terminators BBa_R0010 and BBa_R0012 in the PCR product. All of the PCR products were treated with the enzyme DpnI that digests methylated DNA and purified by the QIAquick PCR Purification kit.

Our overlapping DNA fragments; tat, GFP, RFP and plasmid backbone was cloned together by Gibson Assembly and transformed into E.col strain ER2566 cells. The photograph below (figure 1) shows two of the resulting colonies (named ER1 and ER2) from this transformation. 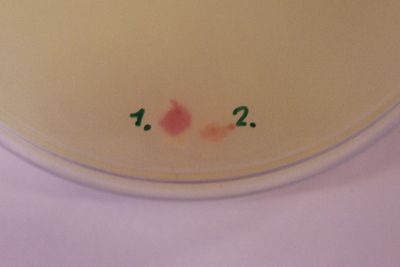 Figure 1: Two of the transformed colonies with the tat_GFP_l_RFP construct. Hereby named ER1 and ER2.

The plasmid from the ER1 samples was isolated by the Promega Wizard Plus SV Minipreps DNA Purification System A1460 and sequenced. Figure 2 below shows the alignment of the sequencing results with the reference DNA sequence. 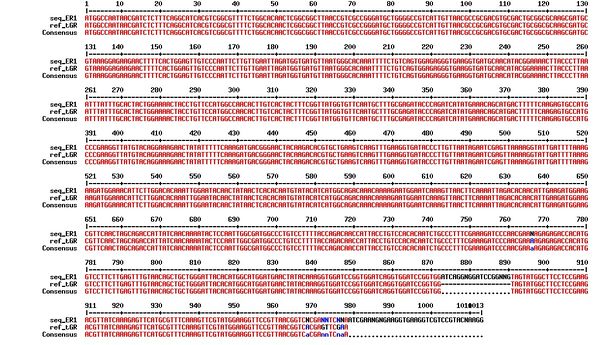 The sequence align almost perfectly. There seems to be some sort of extra insert at the linker region, but this insert is dividable by 3, so the reading frame is maintained. This is supported by the fact that the colonies with this construct is red (see figure above).

Red ER1-cells in liquid media was immobilized in agar and then viewed in a confocal microscope for seeing if RFP was localized in the periplasm. The results can be seen in the two figures (figure 3) below: 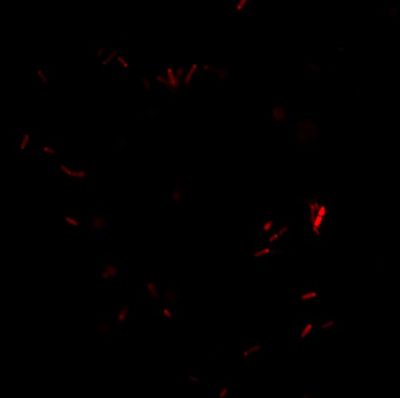 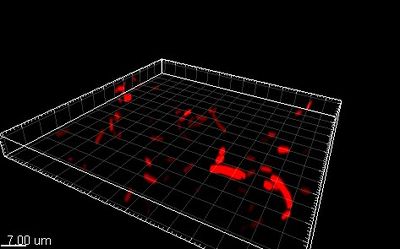 There is no indication that the red fluorescence is more concentrated in the periplasm, as we should expect due to the transport through the tat transport pathway.

We performed a excitation and emission scan of the ER1 bacterias together with E.coli strain ER2566 cells that were transformed to produce single RFP. The samples were centrifuged and the pallets were resuspended in DPBSS buffer. These solutions were den studied in a fluorometer(see figure 4 below): 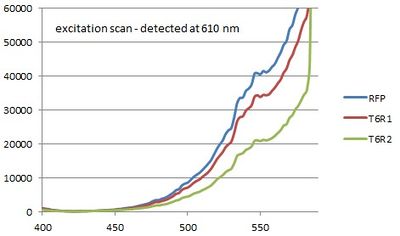 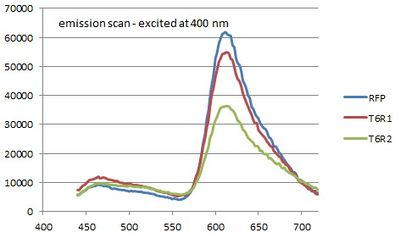 There are no significant difference between the reference sample and the ER samples. It seems that GFP is not present or doesn't fold properly. All of the samples had an excitation/emission at 584/607 which is the same as for single RFP BBa_1010. The test weather a GFP-RFP dimer is produced or only RFP is produced we ran a SDS-PAGE with the ER1 E.coli strain ER2566 cells along with wild type ER2566 cells (see figure 5 below). 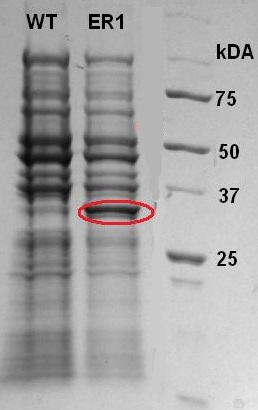 The mass size of the additional band on the ER1 sample is about 28-30 kDa, close to the size of a single fluorescent protein of 26-30 kDa. We therefor conclude that only single RFP is produced in the ER1 cells as there are no green fluorescence.

Vesicles were isolated from ER1 cells and wildtype E.coli strain ER2566 cells by the vesicle isolation protocol. SDS-PAGE was done on both samples with one diluted sample (1:2) and one undiluted sample (1:1) for both(see figure 6). 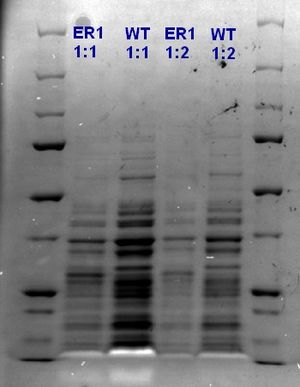 Figure 6:Ladder applied is Precision Plus ProteinTM Unstained Standards. WT stands for wildtype and is the unstransformed ER2566 samples.

There are no additional bands in the ER1 samples compared to the unstransformed ER2566 sample, indicating that there is no GFP-RFP in the vesicles.

There was run an excitation scan of the undiluted vesicle ER1 sample that was compared to a same scan on vesicles from wildtype bacteria. The results were as shown in figure 7 below. 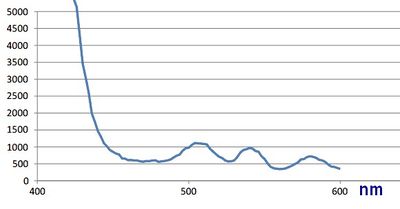 There is no real difference between the samples other than strength of the signals. Both samples have peaks at 504, 540 and 582 nm. It is likely that there is no detectable GFP-RFP dimer in the vesicles.

The conclusion is that only RFP is transcribed in the ER2566 cells and since the RFP will not have tat at the N-terminal, it will not be transported to the periplasm.

We, TU Delft 2017, tried to transport proteins from the cytoplasm into the periplasm and eventually into vesicles. We looked at several methods and pathways and found that Trondheim 2013 had also used the Tat translocation pathway that we wanted to use. This pathway translocate folded proteins from the cytoplasm into the periplasm. We noticed that they had some problems in translocating two fluorescence protein (GFP and RFP) which they fused together with the transport tag. As a proof of concept of our design, we would like to transport GFP into the periplasm. We thus decided to modify their biobrick (BBa_ K1082001) by fusing the same transport tag with only a GFP protein.

Our basic part (BBa_K2306000) is combined with a LacI promoter (BBa_R0010), a ribosome binding site (BBa_B0030) and a double terminator (BBa_B0015) to control its expression. Further information on our project can be found at our composite part (BBa_K2306001) registry page or on our results page.

The wiki of NTNU_Trondheim 2013 team