This chromoprotein from the coral Galaxea fascicularis, gfasPurple (also known as gfasCP), naturally exhibits strong color when expressed. The protein has an absorption maximum at 577 nm giving it a purple color visible to the naked eye. Compared to many other chromoproteins, such as amilCP (BBa_K592009), amilGFP (BBa_K592010), spisPink (BBa_K1033932), asPink (BBa_K1033933) and aeBlue (BBa_K864401), the color development is slower. The color is readily observed in both LB or on agar plates after 24-48 hours of incubation. The protein gfasPurple is closely related to amilCP (BBa_K592009) and has significant sequence homologies with proteins in the GFP family.

The iGEM team of Rotterdam 2019 characterized this part more as part of the bronze criteria. [1]An addition to the characterization tests is to see whether there will be a change in the absorbance spectrum when the proteins are suspended in acidic or basic environments.

The second characterization experiment (figure 4 and 5) was to test the effect of pH: 0.3, 4.3, 7.3, 10.3 and 14. The tests have been performed twice in different wells of a 96-wells plate with a Synergy™ LX Multi-Mode Microplate Reader, 100 uL of each chromoprotein sample was mixed with 100 uL of different pH-samples. Data of the Microplate Reader: https://2019.igem.org/wiki/images/1/18/T--Rotterdam_HR--excelfilepH.xlsx Figure 3: Duplicate of the full spectrum analysis of gfasPurple. In order to measure the absorbance spectrum of gfasPurple we transformed the construct (consisting of BBa_J23110 Promotor, BBa_B0034 RBS and gfasPurple coding sequence) into competent E. coli. After cultivation and we lysed the harvested cells according to this protocol.

The absorbance spectrum was measured for 24 samples of 150 µl lysate in 96-well plate on TECAN Plate Reader Infinite 200 Pro. In figure 1 you can see the absorbance spectrum including the respective standard deviation with a peak at 580 nm (compared to an excitation maximum of 577 nm in the literature [2]). 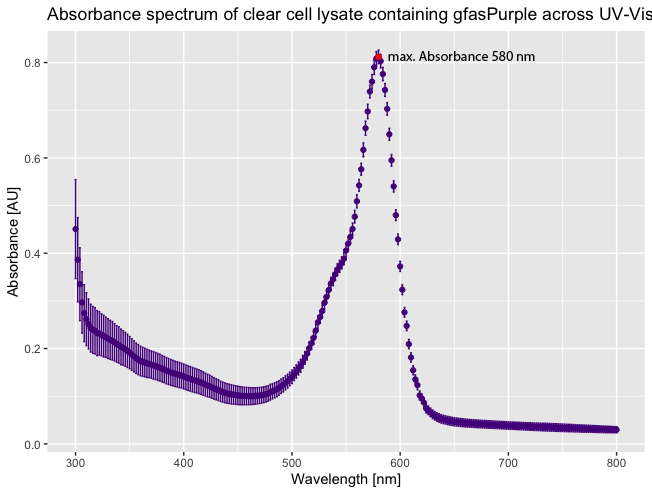 Galaxea fascicularis. The protein was first extracted and characterized by Alieva et. al. under the name gfasCP (GenBank: DQ206394.1). This version is codon optimized for E coli by Genscript.