RBS based on Elowitz repressilator. 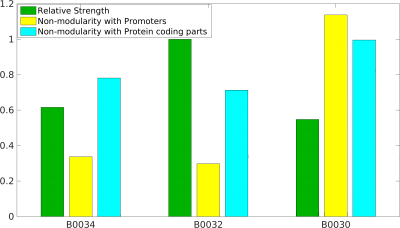 Note: The Elowitz RBS is the definition of efficiency 1.0.

definition of 100% strength in our measurement.

After engineering, E. coli could utilize both MEP pathway and MVA pathway for the universal precursors isopentenyl diphosphate (IPP) and dimethylallyl diphosphate (DMAPP), then synthesize santalene with the help of FPP Synthase (FPPS) and santalene synthase (SS). Except heterologously expressed MVA pathway and ERG20 of Saccharomyces cerevisiae and santalene synthase of Clausena lansium (ClSS), several modifications upon ERG20 or ClSS by amino acid mutation, binding to a hydrophillic tag and the construction of fusion protein were tested for the higher yield of santalene. Therefore, with the help of the co-transformation of pMVA plasmid with various pW1 plasmids, including pW1_CE, pW1_CEM, pW1_TCEM and pW1_CEM_FL, different strains like CE, CEM, TCEM, CEM_FL were successfully constructed (Figure 1). The complete pathway we designed for producing santalene in E. coli is illustrated in Figure 1. 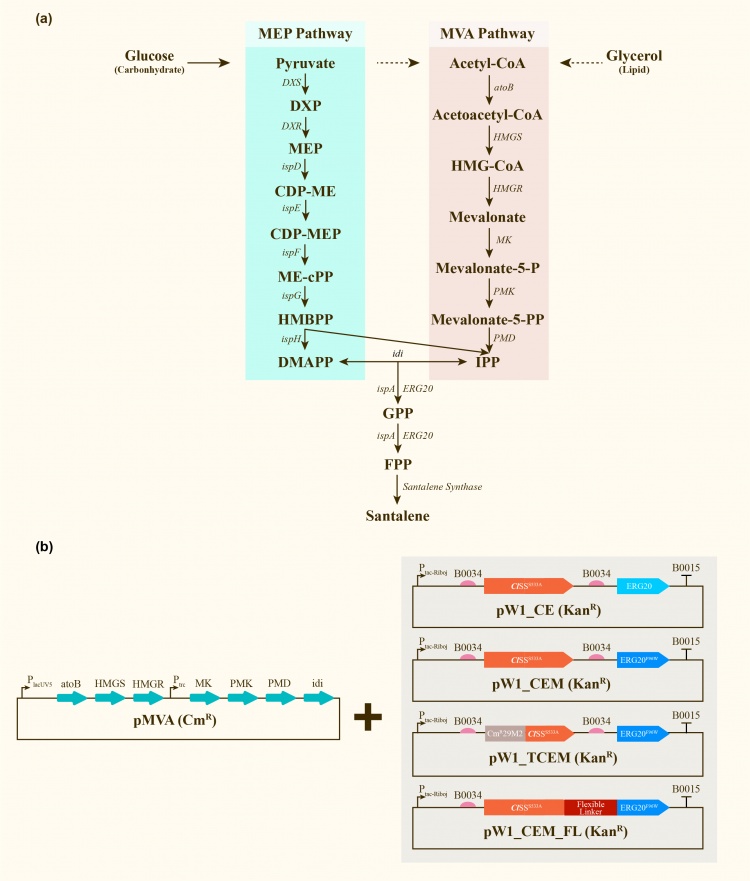 Figure 1: Construction and expression of santalene. (a) Enzymes and some of the reaction intermediates necessary for the production of santalene through the MEP pathway and MVA pathway. (b) Schematic representing the structure of pMVA, pW1_CE, pW1_CEM, pW1_TCEM and pW1_CEM_FL transformed into E.coli DH5α ∆TnaA.

Afterwards, the various engineering of E.coli DH5α ∆TnaA mentioned above were used for santalene production. After rapid centrifugation, the supernatant of dodecane was spiked with with 0.475 g/L a-humulene as an internal standard, and then injected into GC/MS for verification of α-santalene production. It turned out that all samples from four strains appeared a significant peak at the retention time of 26-27 min, and various peak area of different samples exhibited santalene production with differing levels, indicating the general success of E. coli engineering. It can be concluded that the E. coli strain CEM (with pW1_CEM plasmid) produces the maximal level of α-santalene compared to other strains (73.93 mg/L). Furthermore, our study elucidates that the mutation of 96th amino acid into tryptophan could increase the yield of α-santalene by about 20%, substantiating the prominent performance of ERG20F96W in enhancing the supply of FPP and α-santalene production in E. coli (Figure 2). 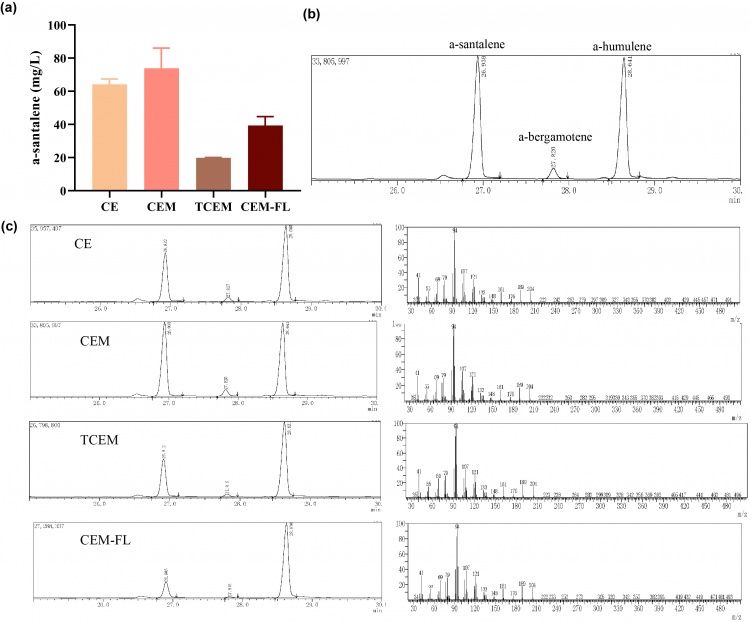 Group: Valencia_UPV iGEM 2018
Author: Adrián Requena Gutiérrez, Carolina Ropero
Summary: We have adapted the part to be able to assemble transcriptional units with the Golden Gate method and we have done the characterization of this RBS.
Documentation:
BBa_K2656011 is the RBS B0034 standardized into the Golden Braid assembly method. It also includes the BioBrick equivalent scar in the 3' extreme, so the insertion of this supplementary bases ensure correct spacing for the CDS expression when assembled into a TU.

Characterization of the this part was performed with the transcriptional unit BBa_K2656101 , which was used in a comparative RBS expression experiment with composite parts BBa_K2656101 and BBa_K2656102. They all were assembled in a Golden Braid alpha1 plasmid using the same promoter, CDS and terminator.

By using this experimental protocol, we have obtained the parameters to valide our constitutive modeland rationale choose its optimization values based on each RBS tested.

All the construction is type IIS standard assembly. The different scar may effect the RBS efficiency for expression.

3. Measure the fluorescence value and the OD value before and after centrifugation.

In this experiment, RBS (Elowitz 1999) -- defines RBS efficiency is same as pSB1K3-GFP.

As shown in Fig2, the OD value of all samples before centrifugation was always lower than after centrifugation. Without the background interference of OD value, we can see the results clearly(Fig3). The fluorescence of pSB1K3-GFP hardly changed. It demonstrated that pSB1K3-GFP expressed a little. The intensity of RBS site in pSB1K3-GFP was weak. 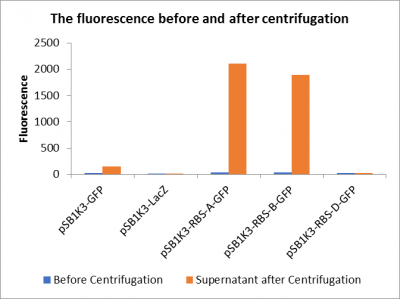 Fig1. The fluorescence before and after centrifugation 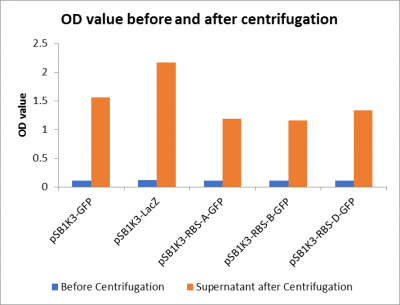 Fig2. OD value before and after centrifugation 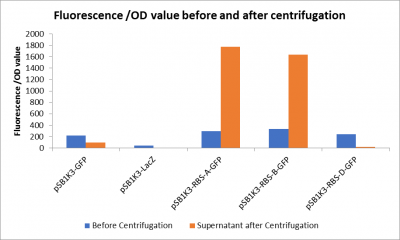 Fig3. Fluorescence /OD value before and after centrifugation

3. Add another 500 μL deionized water, blow and suspend the solution.

5. After heating, centrifuge the tubes for 5min.

8. Turn off the power supply and disconnect the electrode until the bromophenol blue reaches the bottom of the release adhesive. Remove the glass sheet from the electrophoresis device and then remove the gel.

9. Soak the gel in Coomassie brilliant blue dye and dye it in a horizontal shaking bed for 15 min. 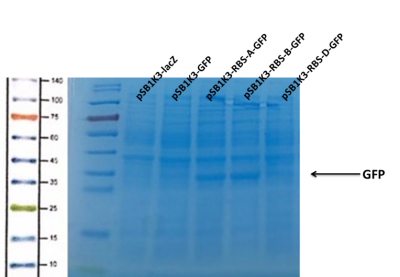 Fig4. The purification of GFP

by the abovemetioned RBS004 (BBa_K3740018), RBS009 (BBa_K374008), and RBS010 (BBa_K3740010) to obtain an array of resultant plasmids as listed in Table 1. These plasmids were then transformed into E. coli DH5α, we quantified the fluorescence intensity when the optical absorbance of bacterial culture at 600nm was around 0.2. And were analyzed with the fluorescent proteins expressed by RBS004, RBS009, and RBS010, respectively.

The average fluorescence intensity of sfGFP induced by B0034. 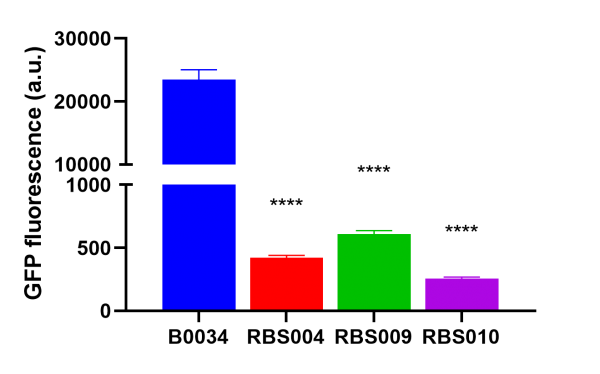 The context dependency of the BBa_B0034 RBS was improved by changing the biobrick spacer scar between the RBS and the ATG start codon, thus creating the RBS V59 BBa_K4294559. V59 was the result of an in silico analysis described thoroughly in our wiki page. Original BBa_B0034 as it is distributed by iGEM: tactagag aaagaggagaaa tactaa BBa_K4294559 : tactagag aaagaggagaaa ccctcca

To verify the reduction in context dependency of the improved RBS spacer variants, different genetic contexts were introduced by fusions of the fluorescent protein sfGFP with the first 36 nucleotides of the proteins Penicillin acylase (PA) (BBa_K4294203), Phosphomevalonate Kinase (PMK) (BBa_K4294204) and AraC (BBa_K4294205).

The above parts together with the CDS of the sfGFP (BBa_K429420) create four genetic contexts in which the original BBa_B0034 RBS and the V59 RBS BBa_K4294559 variant were tested. Unfortunately, the 36ntPMK - sfGFP fusion did not produce any fluorescence in both groups and therefore the context dependency was evaluated in three genetic contexts. The genetic circuits were engineered to be controlled by the pTet promoter and tested in DH5a-z1 cells, which have genome-encoded TetR expression. 0.5 μM of aTc was used for induction. 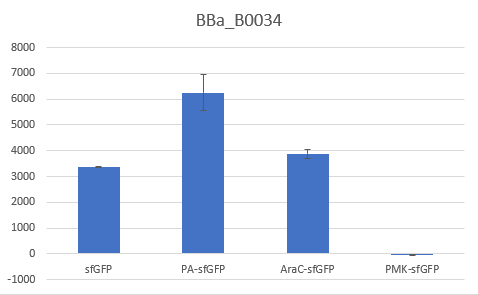 Bar Plot of the Fluorescence/OD (in arbitrary units) ratios of the different reporters under the translational control of the BBa_B0034 RBS after a 3h induction with 0.5 μM of aTc. The 36nt PMK - sfGFP fusion was proven not to function in both RBS groups and was excluded from the CV calculation. 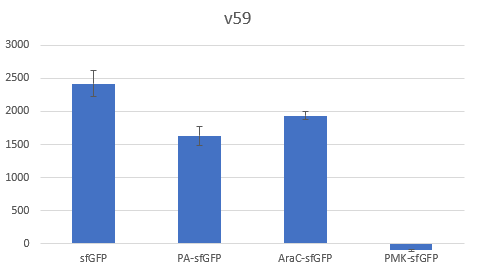 Bar Plot of the Fluorescence/OD (in arbitrary units) ratios of the different reporters under the translational control of the V59 BBa_K4294559 RBS after a 3h induction with 0.5 μM of aTc. The 36nt PMK - sfGFP fusion was proven not to function in both RBS groups and was excluded from the CV calculation.

The V59 RBS the Coefficient of Variance regarding the output signal is reduced by ~14%. The total output is also decreased; it is however in the same order of magnitude in comparison with the output of the BBa_B0034 regulated reporters.

The BBa_B0034 RBS was improved regarding its context dependence by the alteration of the RBS - Start Codon spacer region and the creation of the V59 BBa_K4294559. An obvious caveat regarding our results is the limited sample of the tested genetic contexts. However, since the choice of the potential spacer regions was supported by the in silico analysis, we believe that the V59 RBS is indeed an attractive alternative of the BBa_B0034 RBS and we encourage future iGEM teams in further characterizing it in new genetic contexts alongside with the other RBS candidate sequences that were not tested by our team. The potential reported lower translation rate could be alleviated by transcriptional enhancers leading to the reconstruction of existing RBS parts that will achieve similar average translation rates in comparison with their respective original parts, but with a lower context dependence.