This fluorescent S-layer fusion protein is used to characterize purification methods and the S-layer's ability to self-assemble on surfaces. It is also possible to use the characteristic of mCerulean as a pH indicator or as FRET donor (Kainz et al., 2010).

The SbpA gene under the control of a T7 / lac promoter (BBa_K525403) was fused to mCerulean (BBa_J18930) using Freiburg BioBrick assembly for characterization experiments.

The SbpA|mCerulean fusion protein was overexpressed in E. coli KRX after induction of T7 polymerase by supplementation of 0.1 % L-rhamnose and 1 mM IPTG using the autinduction protocol by Promega. 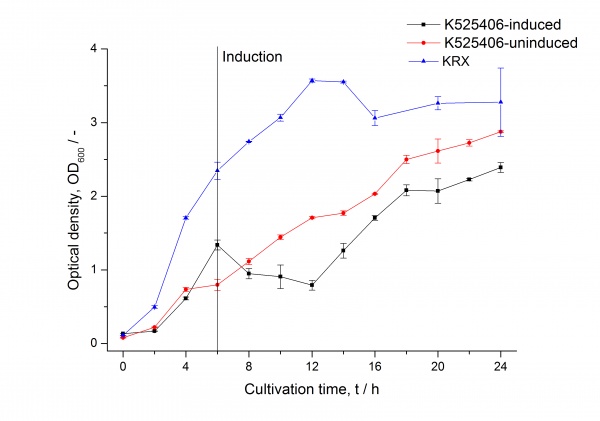 Figure 1: Growth curve of E. coli KRX expressing the fusion protein of SbpA and mCerulean with and without induction, cultivated at 37 °C in autoinduction medium with and without inductor, respectively. A curve depicting KRX wildtype is shown for comparsion. After induction at approximately 6 h the OD600 of the induced K525406 visibly drops when compared to the uninduced culture. Both cultures grow significantly slower than KRX wildtype. 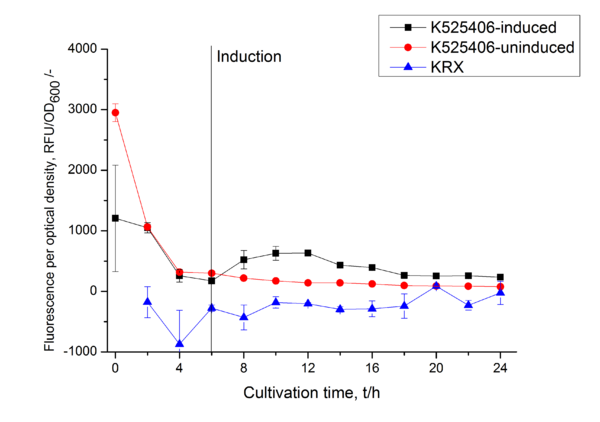