Promoter of the CaiF protein

pCaiF is a promoter region from E.coli containing the binding site for the global regulator Crp which is expressed during periods of starvation. Under, for example, glucose limiting circumstances pCaiF activates transcription. pCaiF is tightly regulated by cAMP levels.

pCaiF is a natural promoter found in E. coli K12, pCaiF is part of the translational unit of the protein CaiF which is a transcriptional regulator of carnitine metabolism under anaerobiosis and glucose limitation. From the original sequence, we took the cAMP-Crp and RNApol sigma 70 binding sites. Under low glucose levels, the cellular cAMP (cyclic Adenosine Mononucleotide Phosphate) levels are high and thus Crp (Catabolite gene activator protein) will bind easier to this molecule forming the complex cAMP-Crp. This complex acts as a transcriptional regulator of over 180 proteins involved in metabolism of secondary carbon sources.

Because of the limited amount of time, we just succeeded on the construction of a measurement device in order to characterize pCaiF. We hope that other teams will use these parts in the future for several reasons, among them the necessity of well characterized promoters in the catalog.

The pCaiF promoter was characterized using GFP generator E0040. To determine the response in E. coli, an experiment in which different glucose concentrations were tested was performed. This was done in a 96-well plate and GFP and OD was measured online of the following strains: E. coli 331D (which contains BBa_K398331) and our negative control ( E. coli with J13002 in the plasmid pSB1A2). The protocol is explained in more detail on the TU Delft protocol page.

The experiments showed a significant increase in GFP production when the initial glucose concentration was 2 g/L compared to the result for an initial glucose concentration of 10 g/L; whereas at 5 g/L a slight increase in GFP production at the end of our measurements was found. From these plots it can be concluded that the part is sensitive to cAMP levels. Moreover, it was found that the part is active under starvation periods (stationary phase at low glucose concentrations). The different plots were overlapped in order to show the differences between the various conditions tested. 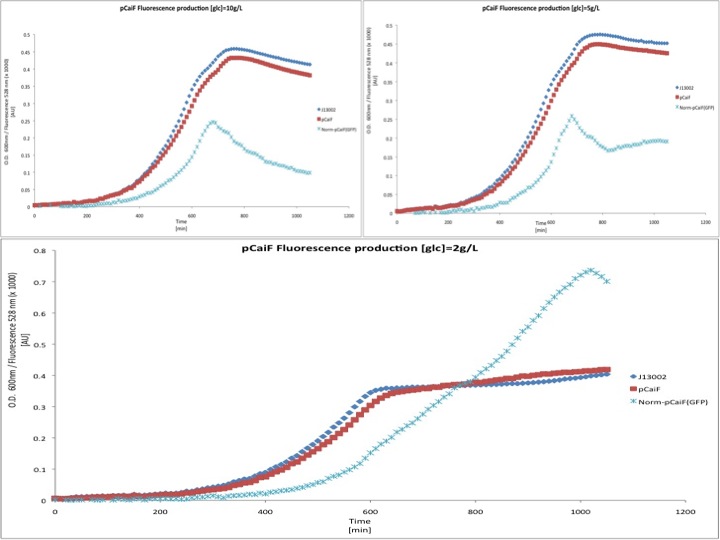