A FRET based chimeric protein that binds to vitamin D

This part is an improvement of the part BBa_K3515011. It consists of the ligand binding domain of vitamin D receptor protein (VDR-LBD) from Homo sapiens, as well as the mNeonGreen (BBa_K1761003) and mCherry (BBa_J06504) fluorophores. The VDR-LBD is fused in between the two fluorophores with mNeonGreen on the N-terminus and mCherry on the C-terminus. The improvements of this part include its codon optimization for Escherichia coli, the removal of a stop codon in the middle of the sequence, the addition of a His-tag, and the removal of restriction sites so the part can be used in a BioBrick assembly. Vitamin D receptor protein interacts with 1,25-dihydroxyvitamin D to produce a conformational change. Biologically, this process is used to start the cycle of protein dimerization so that a protein heterodimer can bind to an enhancer sequence and incite a transcriptional rate change. mNeonGreen and mCherry are fluorescent proteins; this means they absorb a specific wavelength of light and emit a different one. Fluorescence resonance energy transfer (FRET) uses two fluorophores such that one fluorophore absorbs a specific wavelength of light, and emits a similar wavelength of light within the second fluorophore's light absorption range. This second fluorophore can then emit a wavelength of light which can be measured. FRET signal strength is based on the proximity of the two fluorophores such that conformational change in the ligand binding domain of VDR can create a change in the signal of FRET.

The function of the mNeonGreen and mCherry fluorophores (Fig. 1 and 2, respectively) was verified. For this, cell lysates from three cultures were used: transformed E. coli BL21 DE3 cells that were induced with IPTG (promoter: BBa_I719005; transformed, uninduced BL21 DE3 cells (same promoter as induced cells); and untransformed BL21 DE3 cells. Fluorescent signal for both fluorophores increased as amount of cell lysate increased, indicating their function. Some autofluorescence was observed in untransformed cells in the excitation/emission range of mNeonGreen (Fig. 1). Uninduced cells yielded similar results to induced cells; we hypothesize that this was due to the presence of lactose derivatives in the growth medium, which may have caused induction.

Figure 1. mNeonGreen fluorescence (RFU) of induced, uninduced, and untransformed BL21 cells as a function of μg of protein from crude lysate, measured with AutoGain. 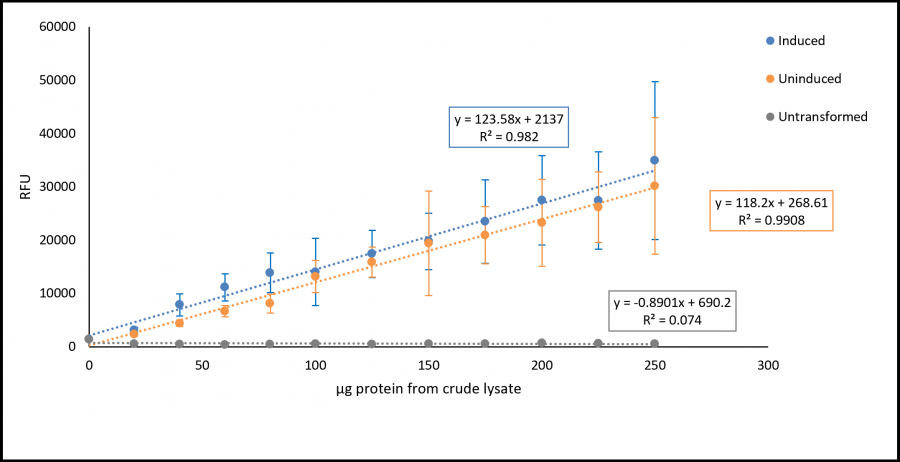 Figure 2. mCherry fluorescence (RFU) of induced, uninduced, and untransformed BL21 cells as a function of μg of protein from crude lysate, measured with AutoGain.

The FRET system as a whole was tested in the induced, uninduced, and untransformed cells by excitation with light at a wavelength of 485 nm and measuring the emission response at a wavelength of 620 nm over increasing amounts of lysates (Fig. 3). FRET signal increased as a function of amount of cell lysate (Fig. 3). 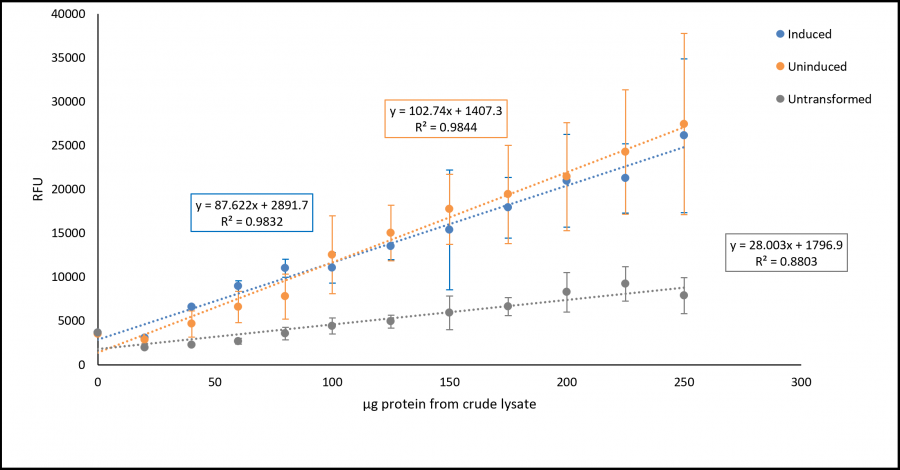 Figure 3. FRET fluorescence (RFU) of induced, uninduced, and untransformed BL21 cells as a function of μg of protein from crude lysate, measured at Gain = 110.

Figure 4. FRET fluorescence (RFU) of 60 μg protein from crude lysates of induced, uninduced, and untransformed BL21 cells upon addition of 1,25(OH)2D at Gain = 110.