mNeonGreen is a yellow-green fluorescent protein. For a fluorescene measurement, the mNeonGreen fluorophore can be excitated with a laser with a wavelenght of 480 nm and readed out at 517 nm. 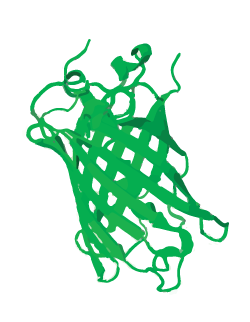 mNeonGreen was characterized by Shaner et al [1]. We inserted mNeonGreen in the pETDuet-1 vector together with OmpX and a BamHI-linker (see Figure 2) [1]. This linker is a 213 bp long flexible GGSGGS linker and by using the restriction enzyme BamHI, the linker can become 45 bp shorter. The BamHI-linker is inspired by the article "Quantitative Understanding of the Energy Transfer between Fluorescent Proteins Connected via Flexible Peptide Liners" by T.H. Evers et al from 29 August 2006 [2]. 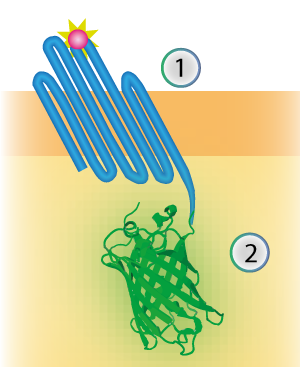 Figure 2: Schematical overview of the expressed OmpX (1) with mNeonGreen (2) in the outer membrane of E.coli.

The sequence of our mTurquoise2 part (see Figure 3) has been verified by sequencing at StarSeq. It contains the prefix and suffix with the correct restriction sites (EcoRI, XbaI, SpeI and PstI). mNeonGreen is 711 bp long. 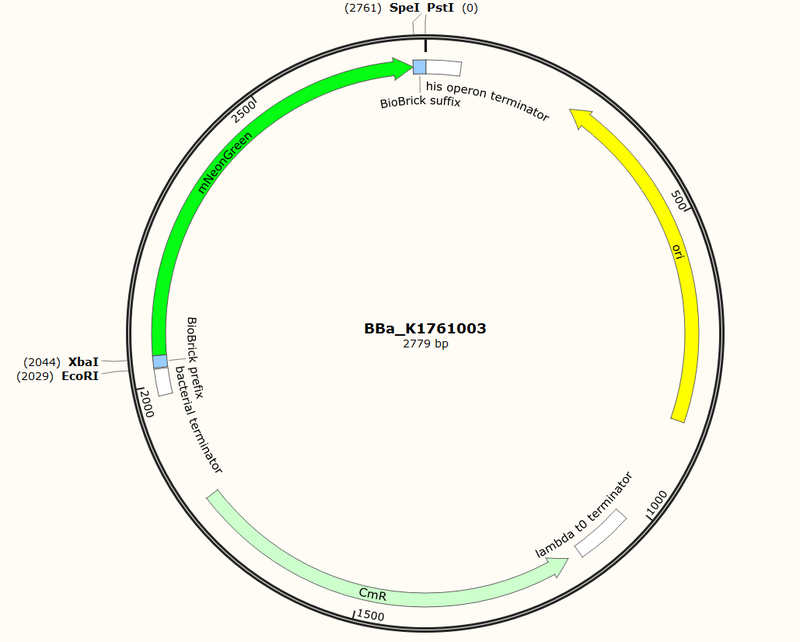 Figure 3: Snapgene plasmid overview of the BioBrick part BBa_K1761003. It shows the pSB1C3 vector with the prefix (containing the restriction sites EcoRI and XbaI), mNeonGreen and the suffix (containting the restiction sites SpeI and PstI).

mNeonGreen was characterized by fusing it to an outer membrane protein (see below) as well as by expressing it on itself in the cytosol. For the expression of mNeonGreen in the cytosol, mNeonGreen was inserted after the constitutive promotor J23101. Even though no RBS was introduced into the composite part, the cells still showed fluorescence which could be measured with the Cary Eclipse spectrofluorometer for both an in vivo excitation scan and a in vivo emission scan. 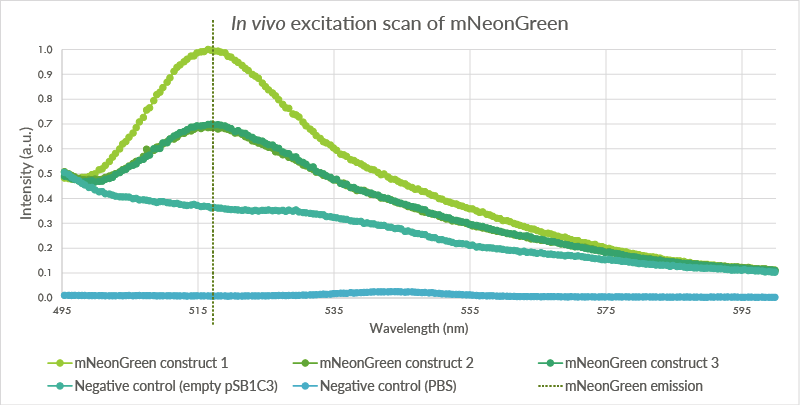 Figure 4: The pSB1C3 vector containing mNeonGreen vector was transformed into BL21(DE3) cells. These cells were measured at an OD of 2.0. Three biological triplicates were obtained which all showed peaks at approximately 517 nm. The first negative control, cells with an empty pSB1C3 plasmid, do not show such a peak. The second negative control, pure PBS, showed a very low intensity. 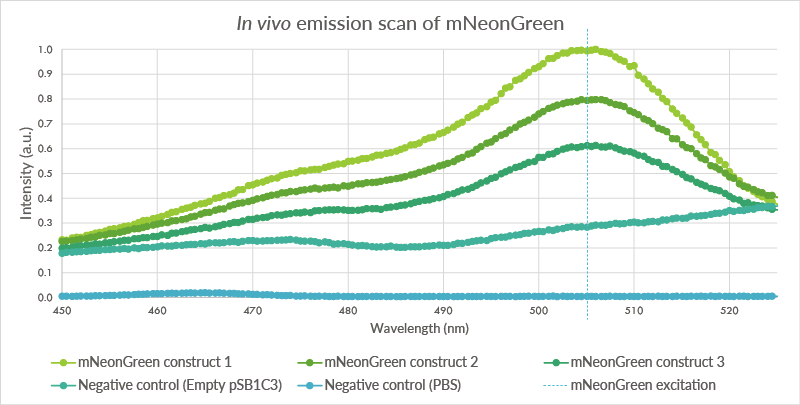 Spectra of the mNeonGreen biological triplicate

For the mNeonGreen-containing BL21(DE3) cells, emission and excitation spectra were obtained. These spectra are shown below in Figure 6, 7 and 8. 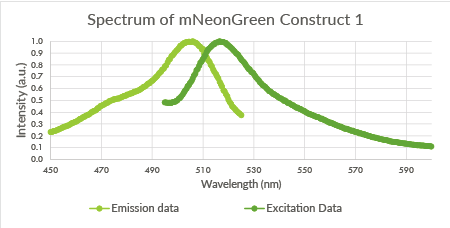 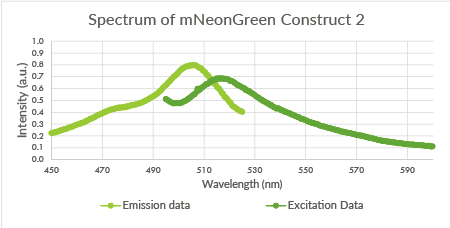 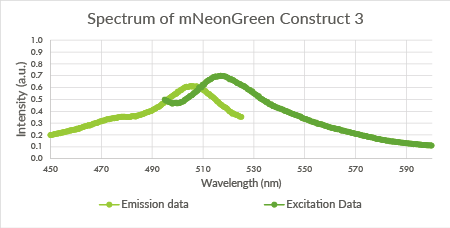 Measurement with the Tecan Safire2 platereader 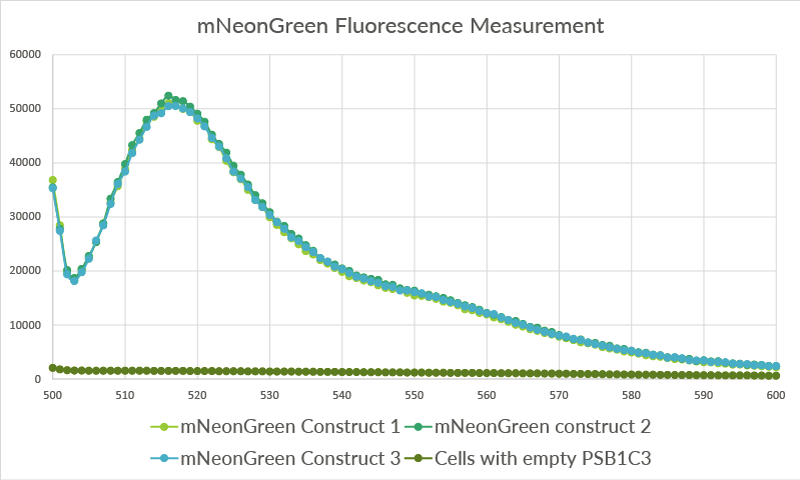 Characterization part of a construct

As already mentioned, mNeonGreen was also characterized by fusing it to an outer membrane protein by preforming a fluorescence assay. For all the experiments below, we used the following vectors: pETDuet-1 with a construct inserted (OmpX + intracellular protein) and pEVOL-pAzF (tRNA + tRNA synthetase). Both vectors were transformed into BL21(DE3). The expression of the construct was introduced by adding arabinose, IPTG and the unnatural amino acid.

To confirm whether mNeonGreen is present in the bacteria, a fluorescence assay was performed. Excitation took place at a wavelength of 480 nm with a laser. Emission was read out at 517 nm. From this experiment, it can be concluded that mNeonGreen is present and works (see Figure 10). This was also tested with both OmpX – mNeonGreen and OmpX – NanoLuc inserted, which gave the same results (see Figure 11). For more information about how to perform a fluorescence assay, see our Protocol Page [2]. 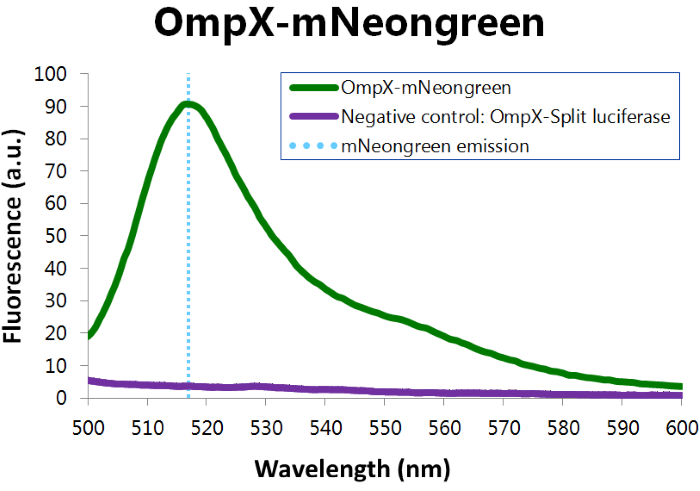 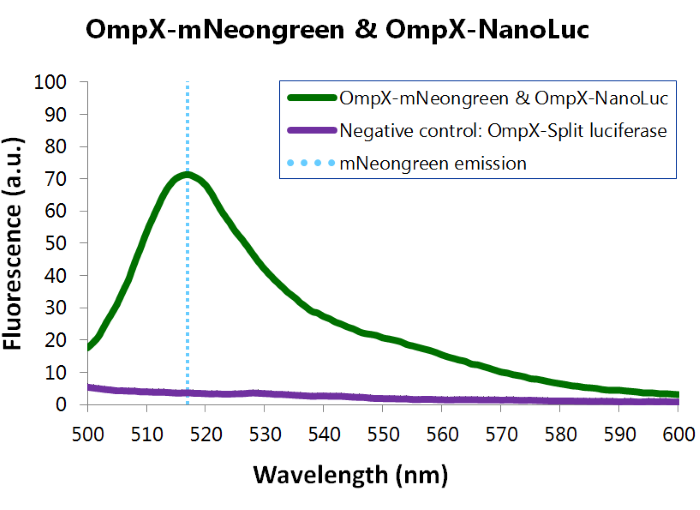 To confirm whether mNeonGreen forms a good BRET (Bioluminescence resonance energy transfer) couple with NanoLuc, a bioluminescence measurement was performed (see Figure 12). In this experiment OmpX-NanoLuc's & OmpX-mNeonGreen's presence in the cells were tested by adding Nano-Glo substrate to the cells and measuring bioluminescence with the spectrophotometer. Figure 8 shows that OmpX-NanoLuc shows a peak characteristic for NanoLuc, indicating NanoLuc's presence within the cells. Moreover, the spectrogram shows a distinct shoulder near 517 nm, the emission wavelength of mNeongreen. Since no laser was used, excitation of mNeongreen can only be accomplished by NanoLuc so BRET (Bioluminescence resonance energy transfer) occured. This signal is measured when no click reaction is performed on the complex, meaning that this can be seen as the background noise of the sensor of iGEM team TU Eindhoven 2015. For more information about how to perform a bioluminescence measurement, see our Protocol Page [3]. 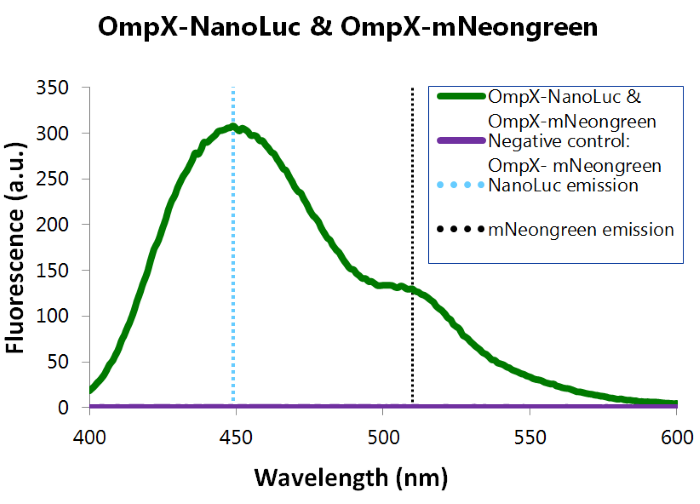 MIT iGEM 2019 Team We improved mNeonGreen (BBa_K1761003) by using it as a fusion protein tag and attaching it to the IL-8 gene in the form of BBa_K2957002 (IL8 with NeonGreen tag). We believe we improved this part for the following reasons: