Constitutive promoter derived from the T7 bacteriophage. Allows high expression of proteins only when the T7 polymerase is present. This part is identical to the part BBa_R0085 which currently hasn't been built.

This part has been characterized for temperature sensitivity in the Cell-Free Chassis by iGEM Imperial 2007. For more detail, please check the testing protocolsand results. 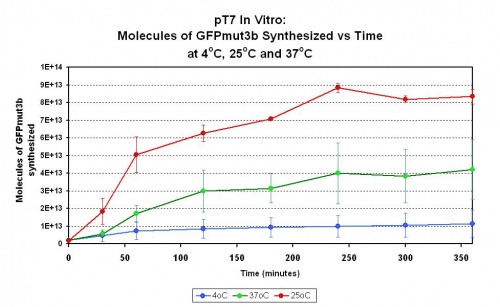 We characterised this part using an in vitro T7 polymerase transcription system, measuring the concentration of Firefly Luciferase RNA transcript at 3 different temperatures (30°C, 37°C, 45°C), produced over time. Detail of the protocol can be found on our Experimentspage.

We fitted our results using a beta regression in R, with p << 0.01 for all models. Our results are plotted below. The regressed model is shown by a bold line and a 95% confidence interval is bounded by two dashed lines. RNA Production over time: Concentration of Firefly Luciferase RNA transcript produced using T7 Polymerase and BBa_I719005 in vitro over time. Models of RNA as a function of time are shown in bold line, with 95% confidence intervals for each model bounded by two dashed lines.

Our results show a highest expression rate of transcript at 37oC when using T7 polymerase in vitro.

This year team ZJU-China has upgraded four modified T7 promoters with increased strength (BBa_K2965011, BBa_K2965012, BBa_K2965013, BBa_K2965014). With the help of previous research[1-2], we carefully chose the site which would be mutated by PCR. These sites distribute in the range from -3 to +6. We mutated these sites by adding variable bases to primers (taatacgactcactatagggaga → taatacgactcacWNNNgSRRNN), and screened for stronger mutants. For details, please refer to https://2019.igem.org/Team:ZJU-China/Improve.

To test the function of mutant promoters, we chose eGFP as our reporter, and added a lac operator behind the promotor to control transcription starts simultaneously. When the E.coli BL21(DE3) is cultured at the stage of logarithmic phase, we added 0.5 mM IPTG to induce the expression of GFP in strains BL21(DE3) for 4 hours. By assessing the absolute fluorescence and OD600, we can conclude the relative strength of all promoters. We screened out four mutants with higher intensity. 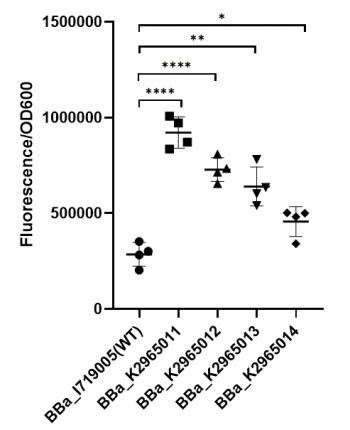 Figure 1. Strength of wildtype T7 promoter and mutant promoters.Relative fluorescent intensity is standardized with fluorescence (excitation wavelength: 485 nm; detection wavelength: 528 nm) per OD600. The intensity of the four mutants was significantly higher than that of the wild type.

1. Use BamHI and XhoI to insert eGFP fragment into the pET28 plasmid.

3. Cyclization the plasmid by PstI and ligase.

5. Incubate at 37℃ and observe colony color to screen for strong mutants preliminarily.

6. Pick greener single colonies, add the colonies into 3ml Lb, incubate at 37℃ in a shaker for 6-8h to dilute the IPTG introduced when picking single colonies.

We characterised the efficiency of this part of promoting inhibitor in a protein regulation system, the inhibitor was sufficiently expressed to inhibite a downstream promoter, T7 promoter successfully worked in our composite part BBa_K3423005. Green fluorescent protein is used as a reporter, which can reflect the promotion effciency of Aca1 using T7 promoter: