K206000 is a variant pBAD promoter with a modified AraI1 site that has been shown both to be responsive to lower concentrations of arabinose and to exhibit a higher maximum expression than the wild type (BBa_I13453), as measured by coupling to a fluorescent reporter.

What you can do with it:
At a given level of arabinose input, BBa_K206000 will provide a higher level of PoPS output than its family members, allowing analog device responses. See our wiki for a project that makes use of this property.

Compatibility:
Chassis: Best used in the E. coli strain BW27783, which has been modified to permit homogeneous pBAD promoter expression by substituting the chromosomal arabinose-dependent promoter of AraE (arabinose transporter protein) with a constitutive promoter [2].
Backbone: Has been shown to work on plasmid pSB1C3.
Reporter: Has been shown to work with reporters BBa_I13507 and BBa_I763020.

We characterize pBAD (BBa_K206000) by an induced suicide system, in which pBAD controls the downstream mazF (BBa_K302033) gene that serves as a reporter, which encodes an endoribonuclease that cleaves RNAs at ACA sites and causes the death of microbe [1]. As a result, we can characterize pBAD in a cell density-dependent manner in Escherichia coli K-12.

In order to characterize pBAD induced by L-arabinose under different concentrations, we take engineered microbe without induction as control group.

As is shown in Fig.1, the cell number of experimental groups show a significant decrease, which indicates pBAD can be induced by 1.25μM/L and 2.5μM/L arabinose, and 2.5μM/L can be considered as a more effective concentration. 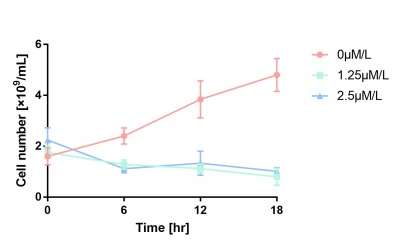 Beyond our project, pBAD is applied for heterologous gene expression due to its advantages, including moderately high expression levels, induction by a low-cost and non-toxic monosaccharide L-arabinose and tight regulation of transcription, which is particularly significant to expressing toxins. [2]