This device is an enhanced construct of 2012 Uppsala's BBa_K592010. It consists of a strong promoter (BBa_J23100) combined with a RBS (BBa_B0032) and the encoding region of the chromoprotein amilGFP (BBa_K592010). This results in a constitutively high expression of amilGFP. 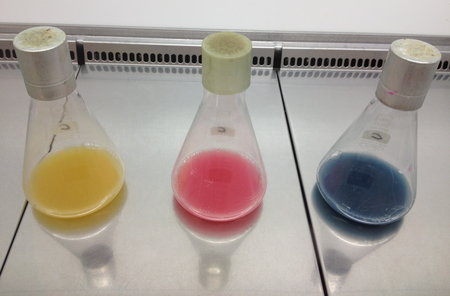 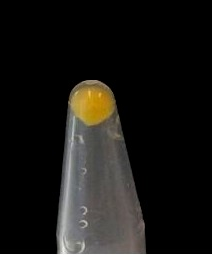 The yellow color of amilGFP can be seen by the naked eye. The chromoprotein also fluoresce when excited. Thus it can be used to identify cells with fluorescence microscopy or flow cytometry. For further information as well as absorption and emission spectra see experience page. 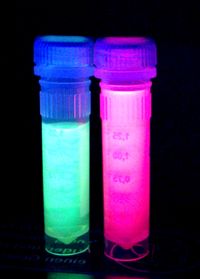 Improved version: BBa_K3187015
The part was improved in terms of its expression level, based on the insertion of a 5’-untranslated region (5’-UTR) upstream of the coding sequence. This 5'-UTR was adapted from iGEM Bielefeld 2015 (  BBa_K1758100) and is based on the research of Olins et al [1] and Takahashi et al. [2] . It contains the strong ribosomal binding site (RBS) g10-L from the T7 bacteriophage and a sequence that plays a role in the regulation of mRNA binding to and release from the 30S ribosomal subunit. The 5'-UTR therefore enhances the translation efficiency of the following coding sequence (CDS) (Fig. 1).

Figure 1:
Schematic depiction of the composition and interaction of the enhancer sequence with the 30S ribosomal subunit described by Takahashi et. al. [2] .

The sequence of the translation enhancing 5’-UTR can be divided into the four main features listed below:

Fig. 2 shows the original version of the part (left) and the improved version (right) after overnight cultivation on an agar plate and after cultivation for 24 h in M9 minimal medium for better visualization of the emitted light at 512 nm [5] . Both the agar plate and the liquid culture were supplemented with chloramphenicol according to the cmp resistance on the pSB1C3 backbone. Both pictures were taken using a dark reader (Dark Reader Clare Chemical Research) for better visualization of the yellow color.

Both the agar plate and the liquid culture show an enhanced expression of the amilGFP gene after the upstream insertion of the translation enhancing 5’-UTR.

The level of fluorescent protein expression in a unit of bacterial cells changes with cell growth. We investigated this phenomenon by measuring the growth of cells and the fluorescence value of cell unit OD600 over time.

1. We transformed the plasmid contanining BBa_K1073024 into bacterial competent cells, plated and cultured overnight at 37 °C. 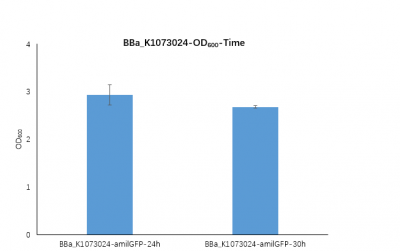 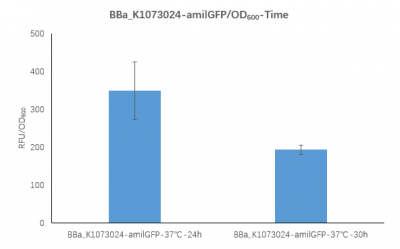 These results indicate that the bacterial strain in the medium reached the stationary phase at 24h and 30h.

During the stationary phase, the strain dies, causing the number of cells to gradually decrease. The protein in the cell will only degrade, but will not be newly expressed, resulting in a decrease in protein levels. 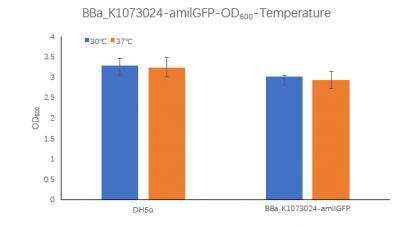 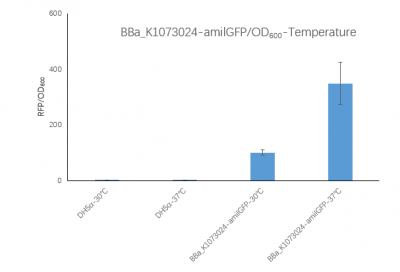