GFP under control of an OmpR-responsive promoter

This is a composite part (a reporter) designed to respond to EnvZ activity in the E. coli chassis organism. It can be used as a biosensor for external osmolarity.

The E. coli EnvZ/OmpR two component system is designed to respond to osmotic stress (Siryaporn & Goulian 2008). EnvZ is a membrane-bound sensor histidine kinase. Increased osmolarity activates the kinase which autophosphorylates itself. The phosphate group is then picked up by OmpR, a cytoplasmic response regulator, which then promotes transcription of the ompC gene. OmpC is an outer membrane protein that is abundant under conditions of high osmolarity.

The immediate aim in 2013 was for the Dundee 2013 iGEM team to engineer EnvZ to respond to different environmental signals other than osmolarity. Then, it was hypothesised, the BBa_K1012005 device could be used to report the presence of other signalling molecules in the environment. First, the function of the new BBa_K1012005 device had to be characterised and quantified in relation to native EnvZ activity. 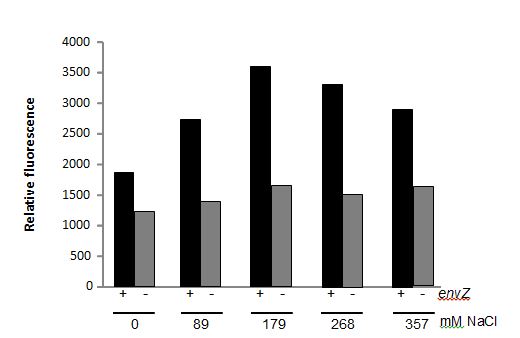 Figure 1: The BBa_K1012005 reporter responds to environmental osmolarity in an EnvZ-dependent manner. E. coli strain BW25113 (envZ+), or the isogenic envZ- mutant JW3367, were transformed with pSC13C carrying the BBa_K1012005 reporter and cultured in media containing the indicated concentrations of sodium chloride. After seven hours, the relative GFP fluorescence of the cultures was determined (ex. 485 nm, em. 535 nm).

The BW25113 and JW3367 E. coli strains were provided by the Division of Molecular Microbiology, College of Life Sciences, University of Dundee.