With a Type IIS assembly method, multiple parts can be assembled easily and reliably in a single reaction, and this can be scaled further to create more complex genetic circuits quickly, efficiently, and affordably.

A Type IIS assembly method uses Type IIS restriction enzymes, which are offsite cutters; they cut DNA at a specific distance from their recognition site. This allows for specified overhangs left by the Type IIS enzymes, which when intentionally designed can allow for multiple DNA fragments to be assembled together in the correct order and orientation.

Example of the recognition site for BsaI, a Type IIS restriction enzyme. The green 'N's are the overhang created when the DNA is cut.

The technical specifications of iGEM Type IIS (RFC1000) are laid out in the documentation below. This documentation will describe what makes a part compatible with the standard, and the requirements to create a sample of that part in Type IIS format. This is not meant to be a complete resource for Type IIS assembly, please see the previous work on MoClo and Loop for more information.

In order to check for Type IIS compatibility, view the Assembly Compatibility box below a part's sequence and features. RFC1000 is the draft name for iGEM's Type IIS standard.

Why were these restriction enzymes selected?

Most, if not all, Type IIS assembly standards use Bsa1 for basic parts (Level 0) , so this ensures maximum compatibility.

In addition to Bsa1, Loop Assembly requires Sap1. While this restriction enzyme site only leaves a 3bp overhang, it has a 7bp recognition site, which theoretically will make it rarer, and make standardization of parts easier. For iGEM Type IIS, we have also modified the PhytoBricks Universal Acceptor plasmid, so that users can PCR their Level 0 parts into the iGEM Type IIS Universal Acceptor using Sap1. Cost analysis [link] has shown that Sap1, while initially more expensive than BioBrick enzymes, is within the price range of other Type IIS enzymes, and when scaled up to several rounds of multi-part assembly is affordable.

What about the BioBrick RFC10 restriction enzymes?

Note, that these fusion sites do not belong on a basic part's documented sequence*. Instead, they belong to the prefix and suffix of the plasmid backbone that will be storing a sample of said part. There is an exception to this when documenting a CDS as your CDS will have a start codon (ATG). This ATG is also used in the 5' fusion site for all CDSs (AATG).

When samples of these basic parts are cut with Bsa1 and assembled together into a Level 1 plasmid backbone, it results in a composite part (Level 1), specifically a transcriptional unit, with the fusion sites now becoming scars within the composite part's sequence.

Why were these fusion sites selected?

These fusion sites were outlined in the original MoClo paper (Weber, et al. 2011). They have since been adopted in other Type IIS assembly standards. As an example, these MoClo fusion sites completely overlap with the PhytoBricks standard. These fusion sites have also been tested against NEB’s 4bp ligation fidelity tool [link], finding them to be completely reliable when used as a set in a reaction.

To ensure maximum compatibility, and because of a long history of use, iGEM has adopted these fusion sites for four basic parts types (Promoter, RBS, CDS, Terminator).

iGEM has elected to not define additional fusion sites for other parts and sub-parts. These can be selected by the user depending on their assembly approach, or as laid out by other Type IIS methods like the PhytoBricks standard.

Can I use other fusion sites in my assembly?

Yes. Your lab or collection of parts may follow a different Type IIS assembly standard that specifies different fusion sites, or you may also be using assemblies with more than four parts and would need to use additional fusion sites.

Most importantly, though, your part's documet you can use your preferred fusion sites when assembling part samples. You When you're documenting your assembled composite part, make sure to enter in the exact scars you used for your assembly.

Prefix and Suffix for Basic Parts

In a Level 0 plasmid backbone, a sample of these basic parts would be stored like so, with Bsa1 sites and fusion sites on the prefix and suffix flanking the part. You can create new basic parts through PCR and cloning into pSB1C00, the Universal Acceptor Vector for Level 0s. 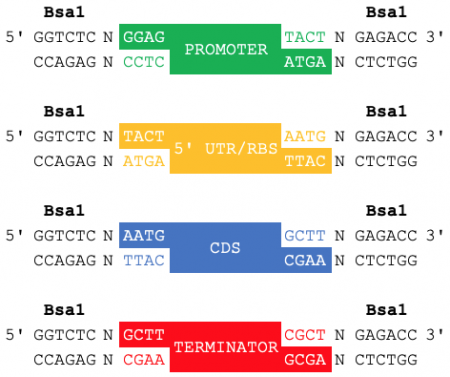 When digested with Bsa1 and ligated with a Level 1 (pOdd) plasmid backbone in a one-pot reaction, these four basic parts will be assembled into a transcriptional unit (TU).

In Loop assembly, Level 0 basic parts can be assembled into a set of pOdd vectors. These Level 1 transriptional units will be flanked by Sap1 recognition sites and fusion sites, enabling further assembly of up to 4 transcriptional units. 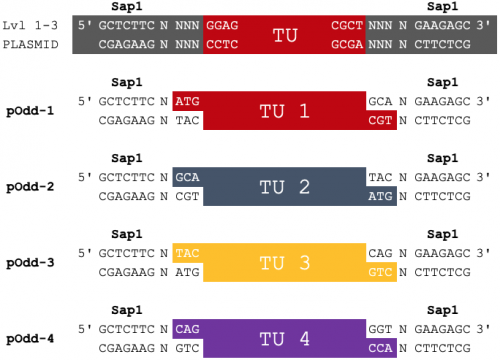 When digested with Sap1 and ligated into a Level 2 (pEven) plasmid backbone in a one-pot reaction, these four trancriptional units will be assembled into a multi-transcriptional unit (MTU).