tthl laccase (T. thermophilus) with constitutive promoter and HIS tag

Initially some trials of shaking flask cultivations were made with different parameters to identify the best conditions for the production of the His-tagged laccase LttH from Thermus thermophilus HB27 named TTHL. Due to the absence of enzyme activity of the enzyme in the cell lysate a purification method was established (using Ni-NTA-His tag resin). Using E. coli KRX containing BioBrick BBa_K863010, TTHL could not be detected by SDS-PAGE (molecular weight of 53 kDa) or by activity test. Therefore a new BioBrick BBa_K863012 was constructed and expressed in E. coli Rosetta-Gami 2. With this expression system the TTHL could be detected by SDS-PAGE and purified by using a small scale Ni-NTA column. The fractionated samples were tested regarding their activity. TTHL was shown to oxidize ABTS. After measuring activity of TTHL a scale up of the fermentation was successfully implemented up to 6 L.

The first trials to produce the LttH-laccase from Thermo thermophilus HB27 (named TTHL) were performed in shaking flasks with various volumes (from 100 mL up to 1 L flasks, with and without baffles) and under different cultivation conditions. The best cultivation condition for BBa_K863010 expressed in E. coli was screened by varying the temperature, the chloramphenicol concentration,induction strategy and cultivation time. Furthermore, E. coli was cultivated with and without 0.25 mM CuCl2 in the medium to provide a sufficient amount of copper, which is needed for bilding the active center. Under the screened conditions no biological active TTHL could be produced. Therefore another BioBrick was constructed and another chassi was chosen. To improve the expression another BioBrick BBa_K863012 was used, which has a constitutive promoter instead of the T7 promoter system. Additionally, the strain E. coli Rosetta-Gami 2 was chosen, because of its ability to translate rare codons. TTHL was then produced under the following conditions:

The reproducibility of the measured data and results were investigated for the shaking flask cultivation, but not yet for the bioreactor cultivation. 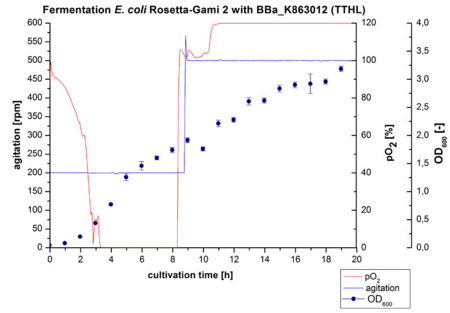 After measuring activity of TTHL we made a scale-up and cultivated E. coli Rosetta-Gami 2 expressing BBa_K863000 in a Bioengineering NFL22 fermenter with a total volume of 6 L. Agitation speed, pO2 and OD600 were online monitored and are illustrated in Figure 1. No initial lag phase was noticeable. Due to the cell growth the pO2 decreased,breakdown of the control unit resulted in a drop to 0%. After a cultivation time of 9 hours the agitation speed was therefore increased manually up to 500 rpm, which resulted in a higher pO2 value of more than 100 % for the rest of the cultivation. During the whole process the OD600 increased slower compared to the fermentation of E. coli KRX expressing BBa_K863000 or BBa_K863005. The maximal OD600 was reached after 19 hours cultivation time at which point the cells were harvested.

The cells were harvested by centrifugation and resuspended in Ni-NTA-equilibrationbuffer, mechanically disrupted by high pressure homogenization and centrifuged. After preparing the cell paste the TTHL could not be purified with the 15 mL column, due to a not available column. For this reason a small scale purification (6 mL) of the supernatant of the homogenisation was made with a 1 mL Ni-NTA-column. 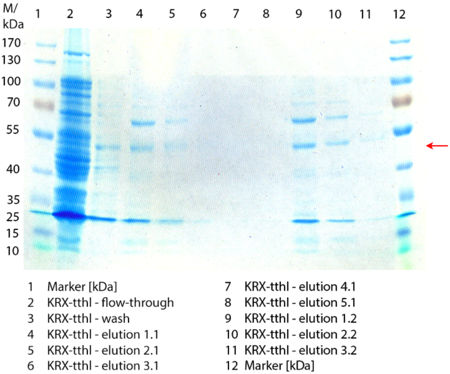 Figure 2: SDS-PAGE of purified E. coli Rosetta-Gami 2 containing BBa_K863012 lysate (fermented in 6 L Bioengineering NFL22). The flow-through, wash and elution fraction 1 to 5 are shown. The arrow marks the TTHL band with a molecular weight of 53 kDa.

Figure 2 shows the SDS-PAGE of the purified E. coli Rosetta-Gami 2 lysates fermented in 6 L Bioengineering NFL22 fermenter. Additionally the flow-through, wash and all elution fractions (1 to 5) are shown. TTHL has a molecular weight of 53 kDa and the corresponding band is marked with a red arrow. The TTHL band can be found in fractions 1 to 3, but not in the other two elution fractions. Furthermore there are some other non-specific bands, which could not be identified. To improve the purification an 15 mL column was implemented.

There was no activity measurable after cultivation and purification of BBa_K863022 under the control of a T7 promoter. Activity tests of TTHL under a constitutive promoter did reveal TTHL laccases capable of oxidizing ABTS. The purificated fractions of the cultivation were tested concerning their protein concentration. After re-buffering the protein concentration was determined again and all fraction were incubated with 0.4 mM CuCl2. For the initial activity test the protein amount was adjusted for comparison. The fractions were measured in Britton-Robinson buffer at pH 5 with 0.1 mM ABTS. Fraction 50 % 1 showed the highest activity (Fig. 3). Regarding the protein amount of this fraction and the statement, that 90 % of this are TTHL laccase, fraction 50 % 1 contains 4,03 µg mL-1. To ensure enough protein for further experiments, the second best fraction, which is fraction 5 % 3 was added to fraction 50 % 1. The first number indicates the percentage of used elution buffer, whereas the second number stands for the fraction number of this elution. In total, both fraction contain 4,4 µg mL-1. 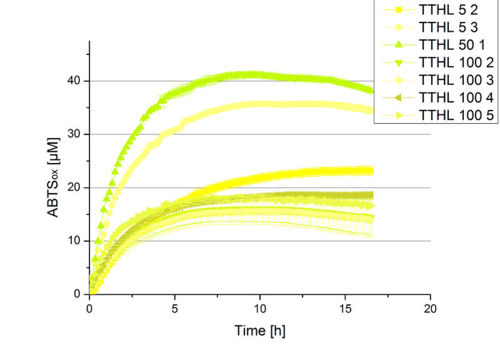 Figure 3: Activity assay of each purified fraction of the new cultivation with TTHL. Samples were re-buffered into H2O and the protein amount in each fraction has been adjusted. The measurements were done using the standard activity assay protocol over night. The first number indicates the percentage of used elution buffer, whereas the second number stands for the fraction number of this elution.

Based on these results protein concentrations have to be determined and the activity of the TTHL laccase can be characterized in further experiments including pH optimum and activity in regard of temperature shifts.

Since regionals: TTHL activity depending on different ABTS concentrations 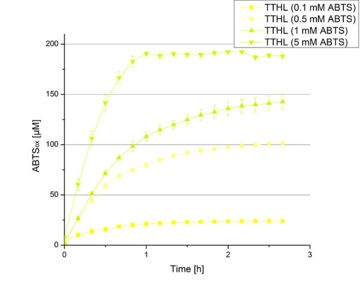 Figure 4: Activity assay to determine the substrate saturation with ABTS as a substrate. Measurements were done with 616 ng TTHL laccase in Britton-Robinson buffer (pH 5) at 25 °C. ABTS concentrations ranged from 0.1 mM to 5 mM. 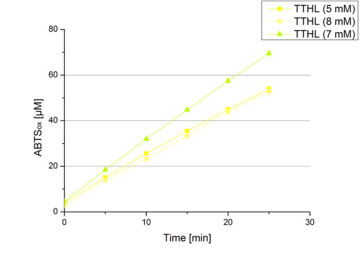 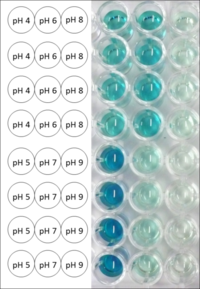 Figure 6: Microtiter plate of the measurements for pH optimum determination. The more intensive the blue color the more ABTS got oxidized. At pH 5 the darkest color has been reached.

The pH of the medium containing the enzyme is very important for its activity. The pH optimum of TTHL is at pH 5. This is the result of activity measurements using Britton-Robinson buffer with differently adjusted pHs. TTHL laccase was re-buffered into H2O and incubated with 0.4 mM CuCl2. The range from pH 4 to pH 9 was tested under substrate saturation at 25 °C for 30 minutes. At pH 5 ABTS gets oxidized the fastest (see Fig. 6 and 7). At higher and lower pHs than pH 5, the activity of TTHL is decreased considerably. The resulting Units mg-1 support the observed data (see Fig. 12). At pH 5 TTHL shows a specific enzyme activity of ~15 U mg-1. The higher the pH, the less U mg-1 can be calculated for TTHL. At pH 4 and 6 the activity is decreased to 42 % and at pH 7 even to 14 % in comparison to pH 5. But still TTHL is active at this pH allowing an application of this laccase in a waste water treatment plant where the average pH is a pH of 6.9. However, a combination with a more effective enzyme should be considered. 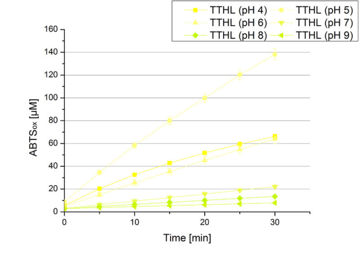 Figure 7: Oxidized ABTS by TTHL laccases at different pH adjustments. The experimental setup included CuCl2 incubated TTHL laccase (308 ng), Britton Robinson buffer adjusted to the tested pHs and 5 mM ABTS. Measurements were done at 25 °C for 30 minutes. The most amount of oxidized ABTS can be detected at pH 5. 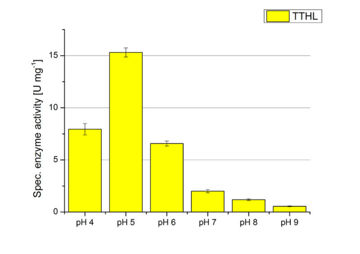 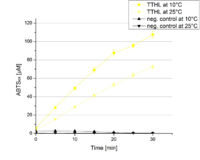 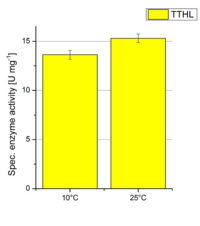 Figure 10: Deriving from the obtained values of oxidized ABTS in time at 10 °C and 25 °C the specific enzyme activity was calculated. For the temperatures a difference of 2 U mg-1 could be detected. One unit is defined as the amount of laccase that oxidizes 1 μmol of ABTS substrate per minute.

To investigate the activity of TTHL at temperatures that will apply at a waste water treatment plant throughout the year, activity tests as described above were performed at 10 °C and 25 °C. The measurements were conducted for 30 minutes. The obtained results reveal an activity decrease of about 35 % of TTHL at 10 °C in comparison to 25 °C (see Fig. 9). The obtained results were used to calculate the specific enzyme activity which was at 13 and 15 U mg-1, respectively (see Fig. 10). The negative control without TTHL laccase but 0.4 mM CuCl2 at 10 °C and 25 °C show a negligible oxidation of ABTS. The low difference observed between the two samples is great news for the possible application in waste water treatment plants.

The measurements were made to test if the produced laccases were able to degrade different hormones. Therefore the produced laccases were inserted in the same concentrations (3 µg mL-1) to the different measurement approaches. To work with the correct pH value (which were measured by the Team Activity Test) Britton Robinson buffer at pH 5 was used for all measurements. The initial substrate concentration was 5 µg mL-1. The results of the reactions without ABTS are shown in Figure 11. On the Y-axis the percentages of degraded estradiol (blue) and ethinyl estradiol (red) are indicated. The X-axis displays the different tested laccases. The degradation was measured at t0 and after five hours of incubation at 30 °C. The negative control was the substrate in Britton Robinson buffer and showed no degradation of the substrates. The bought laccase TVEL0 which is used as positive control is able to degrade 94.7 % estradiol and 92.7 % ethinyl estradiol. The laccase BPUL (from Bacillus pumilus) degraded 35.9 % of used estradiol after five hours. ECOL was able to degrade 16.8 % estradiol. BHAL degraded 30.2 % estradiol. The best results were determined with TTHL (laccase from Thermus thermophilus). Here the percentage of degradation amounted 55.4 %.

The results of the reactions of the laccases with addition of ABTS are shown in Figure 12. The experimental set ups were the same as the reaction approach without ABTS described above. The X-axis displays the different tested laccases. On the Y-axis the percentages of degraded estradiol (blue) and ethinyl estradiol (red) are shown. The degradation was measured at t0 and after five hours of incubation at 20 °C. The negative control showed no degradation of estradiol. 6.8 % of ethinyl estradiol was decayed. The positive control TVEL0 is able to degrade 100 % estradiol and ethinyl estradiol. The laccase BPUL (from Bacillus pumilus) degraded 46.9 % of used estradiol after ten minutes incubation. ECOL was able to degrade 6.7 % estradiol. BHAL degraded 46.9 % estradiol. With TTHL (laccase from Thermus thermophilus)a degradation 29.5 % were determined. 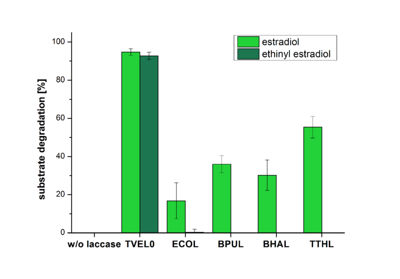 Figure 11: Degradation of estradiol (dark green) and ethinyl estradiol (light green) with the different laccases after 5 hours without ABTS. In the graph it is shown that the bought laccase TVEL0 which was used as positive control is able to degrade more than 90 percent of the used substrates. None of the bacterial laccases are able to degrade ethinyl estradiol without ABTS but estradiol is degraded in a range from 16 %(ECOL) to 55 % (TTHL). The original concentrations of substrates were 2 µg per approach. (n = 4) 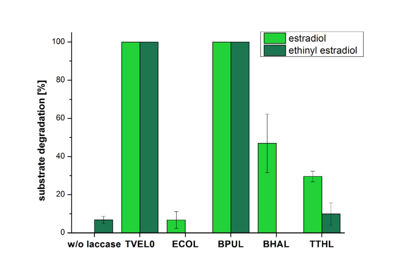 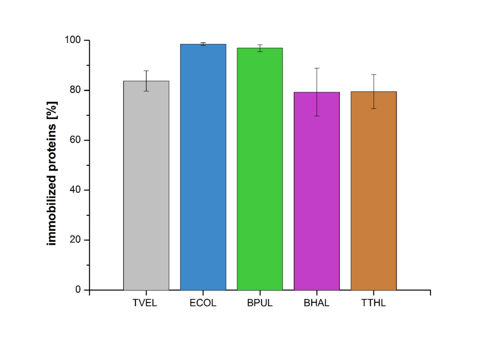 Figure 13: The percentage of laccases immobilized to CPC-Beads. 99 % of ECOL, 97 % of BPUL and 79 % of BHAL and TTHL laccases were bound to the beads.

Figure 13 shows the percentage of laccases bound after incubation with CPC-beads, relative to the original concentration. The concentration of laccases in the supernatant after incubation was measured using Roti®-Nanoquant. The results showed that only 21% of TTHL laccases was still present in the supernatant. This illustrates that TTHL was successfully immobilized on the CPC-beads. 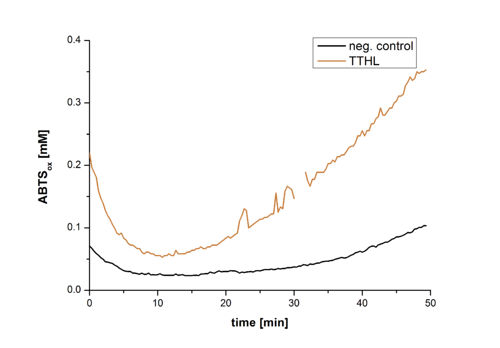 Figure 14: Illustration of ABTS oxidation by TTHL with time compared to the negative control. The increase in ABTS oxidized proves laccase activity.

Figure 14 shows the illustration of ABTS oxidation by TTHL with time compared to the negative control. The increase in ABTS oxidized proves laccase activity even if a direct comparison with the original and not immobilized laccase solution was not possible due to the very low concentration of purified TTHL.