This is BBa_K331025 under the control of a tetracycline repressible promoter BBa_R0040.

This will be a component of a proof-of-concept part that will show localization of proteins into the interior of a microcompartment formed by the assembly of lumazine synthase proteins.

Prior to introducing a oligoarginine tail onto the catechol-2,3-dioxygenase protein with the intention of directing the fusion protein into a lumazine synthase microcompartment, there must be some confirmation that oligoarginine tail is indeed causing the protein to which it is attached to localize within the microcompartment. We chose to utilize a technique known as fluorescent resonance energy transfer1 (FRET) to verify localization. In FRET, when a dye pair comes into close proximity to one another, one dye (the donor) will transfer some of its energy to the second dye (the acceptor). This will cause the acceptor to fluoresce without direct excitation. The dye pair we have chose is CFP as the donor and yellow fluorescent protein (YFP) as the acceptor.

Here we investigate the ability of BBa_K331033 to produce CFP and emit light at its characteristic emission wavelength.

In order to characterize the tetracycline repressible CFP (BioBrick BBa_K331033), cyan fluorescent protein (CFP-BBa_E0020) with an oligoarginine tag fused to the C-terminus (BBa_K331025) (and preceded by a ribosomal binding site – BBa_B0034) was synthesized. We used our Red/White 3-Antibiotic assembly method to add a tetracycline repressible promoter (BBa_R0040) for constitutive expression of the fusion protein. This construction yielded BioBrick BBa_K331033.

The BioBrick containing plasmid was transformed into Escherichia coli DH5α cells. These cells were grown to an OD600 of approximately 0.7 in LB media, and diluted 1:10 with MilliQ H2O immediately prior to analysis by fluorescent spectroscopy.

Fluorescence at 476 nm was observed. This peak, along with a shoulder occurring at approximately 510 nm is consistent with results obtained by McRae1 et al. in their rapid purification of ECFP. 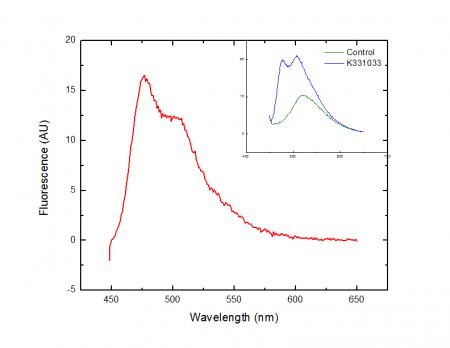 The BioBrick BBa_K331033 that we constructed generates CFP in the absence of tetracycline, as expected.