MazF is toxin protein in MazE-MazF, toxin-antitoxin module. It is function as mRNA endonuclease

We performed experiment to work our final genetic circuits and characterized mazE and mazF.


This experiment consists of the four parts below.

In order to control cell growth as we desire using the mazEF system, it is necessary to adjust the expression level of mazF. It has been reported that MazF has very strong ability to inhibit cell growth and that mazE expression can not recover it when mazF is expressed at high level[1]. Therefore, we here explored the relationship between concentration of the expression inducer for mazF (arabinose in this experiment) and expression level of it; such information is important for operating our final genetic circuits properly.
We constructed 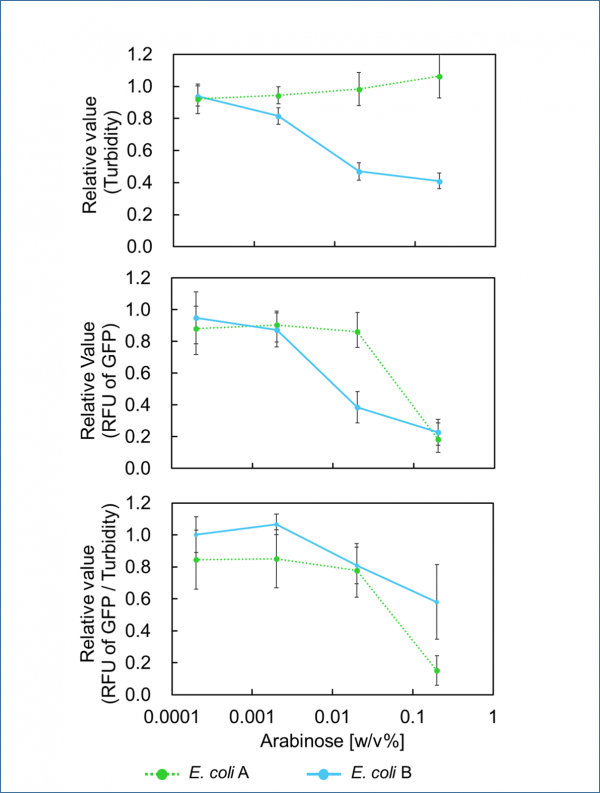 As shown in Fig. 2, when the mazE expression was induced 2 h after the mazF expression, cell growth resumed gradually. Similarly, the RFU of GFP also increased mazF expression, and about 8 h later, cell growth resumed. Similarly, the RFU of GFP was also resumed. Before starting the experiments, we anticipated that recovery from the growth inhibition by mazF would be observed immediately after the induction of mazE expression. However, it took 8 h for us to observe the recovery. The reason is unclear, but the prior expression of mazF might damage the cells and it might take time to repair. Alternatively, the mazF expression might lead cells to the dormant state from which cells can hardly escape. We assume that this feature is advantageous for our Snow White project, because we can prolong the sleeping time of Snow White and take sufficient time for Prince to find Snow White. As a conclusion, the “Stop and Go” experiment was successful.

In experimentⅡ, a toxin inhibits cell growth, and an antitoxin resuscitates it. However, what will happen when a toxin is expressed after the constitutive expression of antitoxin? Therefore, in the experiments of this section, we conducted a reciprocal experiment and named this experiment "Go & Stop".
We constructed 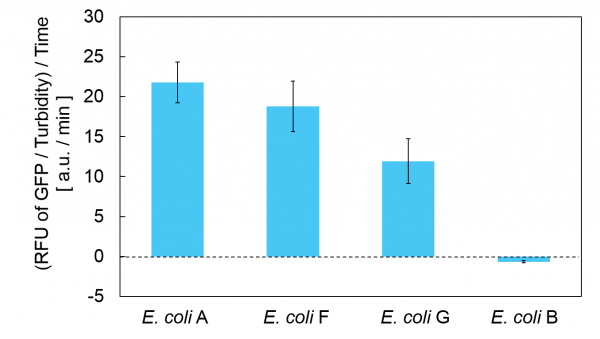 The control of cell growth by the mazEF system has been shown until the previous sections. In this section, we analyzed whether the “stop & go” experiment can be repeated many times. It seemed like that dormancy of Snow White was controled by Queen, we named this experiment "Queen's caprice".
We constructed

From the result, it was clarified that growth of E. coli cells was repeatedly controlled by expression of mazE (Fig. 5 and Fig. 6). We believe that the repeated control of cell growth is very useful for the future biotechnology; see http://2016.igem.org/Team:Tokyo_Tech/Human_Practices. 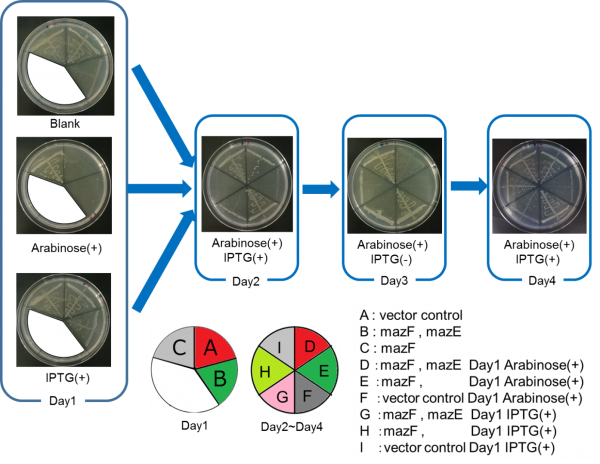 Fig. 5. Control of colonization by mazEF system on the LB Agar Plate Ⅰ

Fig. 6. Control of colonization by mazEF system on the LB Agar Plate Ⅱ

MazF is toxin protein in MazF-MazE, toxin-antitoxin module. It was first registered in 2013 and used as an mRNA endonuclease. It kills bacteria without cracking them, which will directly influence the value of OD600.

In order to quantify the toxicity of mazF, colony forming unit (CFU) cell viability assays were used to measure functionality of the circuit(1).

When 0.2% arabinose was added, the experimental group showed a sharp decrease on the CFU, which indicates the protein encoded by MazF is fatal to E. coli. It further demonstrated that the MazF encoded by J23100-RBS (BBa_K880005) was able to work as a toxin.

In order to fit the project, our research object for contribution studies is MazF protein (Escherichia coli).

In our work, an iron-limiting inducible expression system was constructed. And the plasmid consists of promoter PfhuA1 (RBS and Fur box on it), toxic gene mazF, rrnB T1 termina tor and T7Te terminator, which are arranged orderly on a pUC57 backbone. In this iron regulatory system, the presence of abundant iron inhibits the RNA polymerase from contacting with the promoter region sequence and prevents the transcription, so as not to express the toxic gene mazF. On the contrary, there is not enough iron to turn on the expression of downstream toxic gene. More importantly, this system is tightly regulated by iron-limitation signal [1].

Accordingly, we aim to induce the expression of toxic gene by artificially limiting iron to achieve bacterial suicide. Finally, we successfully verified the suicide function of MazF protein.

First of all, we did an experiment to verify the suicide function of mazF. There were two pieces of sterile filter paper on the M9 plates, one containing 10μL FeSO4, and the other containing 10μL double distilled water. The M9 culture plate has not Fe2 +, so there will be bacteria growing around the filter paper (marked as the “Fe2+”) containing FeSO4, and no bacteria around the other filter paper (marked as "0") containing double disulled water, if the plasmid has the function. Based on the experimental result (Figure 1.), we can prove that mazF has the suicidal effect. In addition, we set four groups of different concentrations of Fe2 + to regulate the expression of mazF to further prove the suicide effect. If mazF has the suicidal effect, the growth of bacteria will be inhibited in the absence of Fe2 + (0 μM Fe2+). According to the experimental results (Figure 2.), the turbidity degree of bacteria has obvious differences under different conditions of Fe2+. Compared with the control, the turbidity of "0 μM Fe2+"group was a little clearer than that in the "10 μM, 20 μM, 40 μM Fe2+" groups.

Figure 2. E. coli growth with toxic gene mazF in the M9 medium with the different concentration gradients of FeSO4.Turbidity degree of bacterial liquid in each group. This experiment was repeated for three times.

Worring that the addition of Fe2+ will affect the growth of common bacteria, we also conducted a control test of DH5α (Figure 3.). Within 9 hours of the incubation, OD600 of each group was measured every hour. From Figure 3., the growth of the "0 μM Fe2+" group is inhibited in the logarithmic period. And the growth of DH5α in the 4 groups of Fe2+ showed on no difference.

In conclusion, the expression of toxic gene mazF is related to the concentration of Fe2 +.And when there is enough Fe2+ in the culture environment, the expression is repressed. On the contrary, when the amount of Fe2 + is not enough, the gene expression is induced and the toxic protein MazF is expressed, thus kills the bacteria.

The promoter PfhuA1 (RBS and Fur box on it) and mazF are ligated between the parts by overlap extension PCR, and the construted fragment is ligated to pUC57 by homologous recombination. The correct construction is confirmed by sequencing.

1. Methods of molecular cloning and transformation are described above. Transform this plasmid into E. coli DH5α. Then spread it onto a LB medium plates with 60 μg/mL ampicillin and incubate overnight at 37℃ in a biochemical incubator.

2. Pick three monoclonals from the same plate as parallel repeats. With the 5 ml LB medium containing 60 μg/mL ampicillin, the seed culture media are grow at 37℃ while shaking at 200 rpm overnight.

3. Take 2 mL seed culture medium into 2 mL EP tube and centrifuge for 2 minutes at 5000 rpm. Then wash the centrifugated deposit with PBS buffer to remove ferrous ions for three times. After that resuspend the deposit in the M9 medium (60 μg/ml ampicillin) and make the final volume 5 mL.

6. Samples are taken from each group once an hour and measured by UV spectrophotometer. And then convert the raw data to OD600.

8. Dilute the incubated bacterial fluid to 102 and 103 times respectively.

9. Take 10 uL bacterial fluid from the two diluted groups, spread it onto M9 medium containing 60 μg/mL ampicillin respectively. Then two filter papers with a drop of 10 μL of FeSO4 (40 mM) and 10 μL of double distilled water respectively are put onto each plate. Blank controls are fresh M9 medium containing ampicillin (Amp, 60 μg/mL) with the engineered bacteria. Incubate them overnight at 37℃ in a biochemical incubator.

10. All experiments above are carried out in 3 biological replications.