Laccase for the degradation of polyethylene and organic pollutants. Sequence pending. 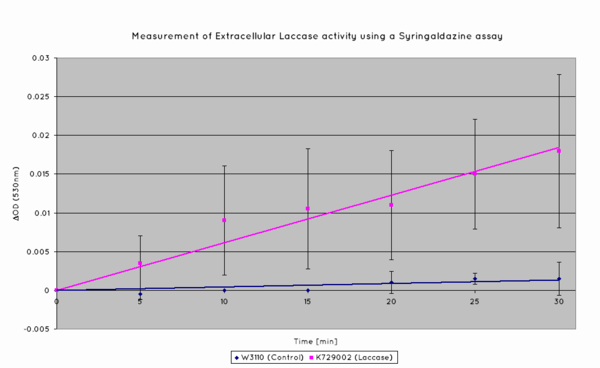 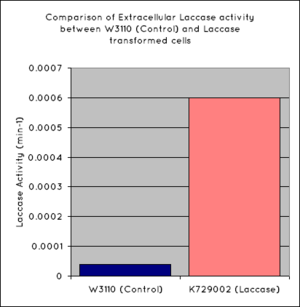 Laccase enzyme acts on many different substrates, with its activity also prominent in helping break down polyethylene. Since our aim is to degrade plastic present in menstrual sanitary napkins, it was important to know whether it's activity is affected in the presence of blood. Laccase has mutiple copper ions in its cofactor and therefore it was crucial for us to know whether the activity of laccase is hindered in the presence of other ions present in blood.

Cloning of laccase in iGEM backbone plasmid will lead to normal low level of laccase expression which will show in vitro activity, but the activity and expressive rate is non-obvious. For the above reasons, we decided to clone laccase gene is pET28a+ expression vector for sustainable production of laccase.
To insert laccase gene into cloning expression vector (pET 28a+), we first designed prefix and suffix primers which contain EcoRI and PstI restriction enzyme sites respectively. The PCR amplification of laccase gene from BBa_K729002 using EcoRI-prefix and PstI-suffix primers give an expected 1.5 kb DNA band as shown in (Fig. 1).

The purified PCR amplified products were restriction double digested with EcoRI-PstI, and ligated at same sites in pET28a+ (5.3 kb) expression vector and transformed recombinant plasmid into E. coli (JM109). The transformation result was shown in Figure 2. To check whether the construction was successful, we picked few colonies to extract their plasmids. The inclusion of insert into the recombinant plasmid was verified both by restriction digestion. We tested the expression of laccase enzyme by transforming the pET28a+ recombinant carrying pET-laccase gene into E. coli expression strain BL21. To overexpress laccase enzyme, E. coli expression strain BL21 containing laccase gene under IPTG-inducible T7 promoter was induced by 1mM isopropyl-β-D-thiogalactopyranoside (IPTG) for 3hrs and 18 hrs at 37°C, corresponding proteins were separated by 12% SDS-PAGE followed by staining with Coomassie Brilliant Blue G250 (CBB). Prior to induction with IPTG, expression of laccase is not detectable by SDS-PAGE (Figure 3 Lane 1). After IPTG induction recombinant, protein bands of about 58 kDa was observed which is in agreement with the theoretical molecular weight of laccase which is 58.87 kDa (Figure 3 Lane 2). We tested whether expressed laccase is active through enzyme activity experiments. To detect laccase enzyme activity, colorimetric assay was carried out using 2,2'-azino-bis(3-ethylbenzothiazoline-6-sulphonic acid) or ABTS method. The nonphenolic dye ABTS is oxidized by laccase into water soluble chromogen ABTS+ which is more stable and preferred state of the cation radical. ABTS+ can be monitored spectrophotometrically at 420 nm. The concentration of the cation radical responsible for the intense blue-green color can be correlated to enzyme activity and is read at 420nm. The supernatant of overnight grown bacteria culture acted as a source of laccase enzyme. The enzyme activity experiment was carried out by using 100 μL of enzyme and 100 μL of ABTS solution (0. 5 mM) in sodium acetate buffer (pH 5). The enzymatic units (U) defined as the amount of enzyme transforming 1 µmol of substrate per minute is calculated by the following formula: Equation : U/L = (∆E×Vt)/(ε×d×Vs)

with ∆E being the change in the extinction of light [min-1] at 420 nm
ε being the molar absorption coefficient of ABTS [M-1 cm-1]
d being the layer thickness [cm] in your cell that the light has to pass
Vt is the total volume measured and Vs is the volume of the enzyme stock solution added to the ABTS stock solution.
It is demonstrated in the given graph by in vitro ABTS assay that recombinant laccase protein can oxidize ABTS. It is essential for our project that recombinant microorganisms should be capable of polyethylene deterioration in the presence of blood and/or dried blood. To check the effect of blood on laccase enzyme activity, we performed the ABTS assay in the presence of different concentrations of blood. Figure 4. Laccase activity in presence and absence of blood. The fold differences were calculated compared with control groups and shown in the figure. *P<0.007; **P<0.01; [one-way analysis of variance].

It was clearly observed that the laccase activity is not significantly affected by blood.