Additionally, pSB2K3 has terminators bracketing its MCS ("multi-cloning site") which are designed to prevent transcription from *inside* the MCS from reading out into the vector. The efficiency of these terminators is known to be < 100%. Ideally we would construct a future set of terminators for bracketing a MCS that were 100% efficient in terminating both into and out of the MCS region. 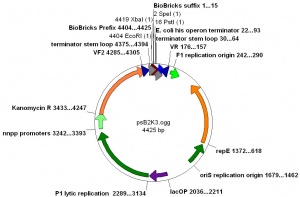 Cells that contain a chromosomal lacIq allelle (e.g., E.coli D1210, an HB101 derivative) provide tight repression of the P1 replication origin (NOTE: since pSCANS uses an F' origin the lacIq allele can't be carried on a separate F-based plasmid). Induction to high copy can be carried out by addition of IPTG (1mM final concentration). IPTG can be added at different points during growth (to suit your application). For instance, to prepare both cells (e.g., for glycerol stocks) and DNA (e.g., for further cloning) grow the cells to mid log, pull a sample for the glycerol stock, add IPTG and continue growth, prepare DNA from a saturated culture.

This result is from exponentially growing culture. For cell culture in stationary phase the mean copy number possibly increases.

repE gene product controls the replication initiation of the plasmid via the F1 replication origin.