1 Registry Star
25 Uses
Get This Part

Positively regulated, OmpR-controlled promoter. This promoter is taken from the upstream region of ompF. Phosphorylated OmpR binds to the three operator sites and activates transcription.

In nature, this promoter is upstream of the ompF porin gene and is both activating and repressing. The regulation of ompF is determined by the EnvZ-OmpR osmosensing machinery. EnvZ phosphorylates OmpR to OmpR-P. At low osmolarity, EnvZ has a low activity, producing a small concentration of OmpR-P. This OmpR-P binds to high-affinity sites on ompF, activating transcription. At high osmolarity, however, EnvZ is more active, creating a high OmpR-P concentration. OmpR-P then binds to the low-affinity sites on ompF, repressing transcription. See Notes section for further discussion of negative regulation.

We got the complete sequence of OmpF promoter (with negative regulator) from E. coli K12 strain genome. We ordered the whole sequence in tandem with the mRFP1 reporter via IDT. This gave us the part BBa_K4061000. In order to analyse the action of negative regulator we PCRed out the fragment right before the positive regulators in order to eliminate the negative regulator. The resulting sequence is BBa_R0084 OmpF promoter with mRFP1 reporter. Cells transformed with these two constructs were cultured in LB media with varying NaCl concentrations and the fluorescence intensities were compared at different media concentrations - final Na+ concentrations of 0.033M, 0.048M, 0.078M, 0.131M. 0.171M, 0.214M, 0.256M and finally 0.299M. Concentrations below 0.171M are considered as "low osmolarity" from the ideal LB medium recipe.

Note: Data from the two constructs, despite being taken concurrently, is not plotted on the same graph due to the difference in the intensities. Separating the graphs allow better visualisation of the trend in the promoter activity. 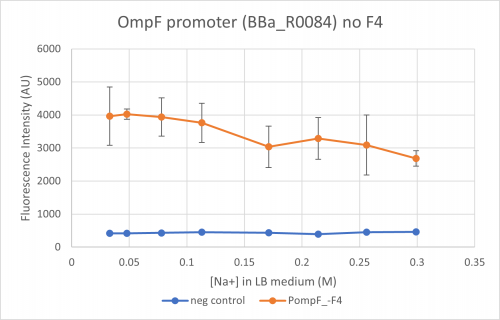 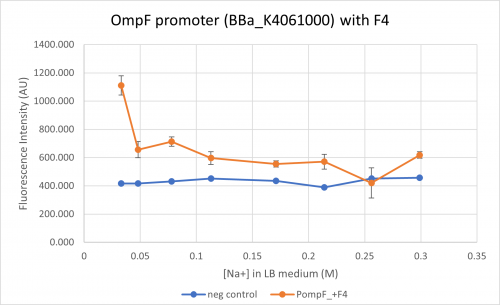