Positively regulated, OmpR-controlled promoter. This promoter is taken from the upstream region of ompC. Phosphorylated OmpR binds to the three operator sites and activates transcription.

In nature, this promoter is upstream of the ompC porin gene. The regulation of ompC is determined by the EnvZ-OmpR osmosensing machinery. EnvZ phosphorylates OmpR to OmpR-P. At high osmolarity, EnvZ is more active, creating more OmpR-P. OmpR-P then binds to the low-affinity OmpR operator sites upstream of ompC.

Summary: We analysed the noise produced by BBa_R0082 by flow cytometry using a ΔEnvZ strain.

To determine the noise of the OmpR promoter, we measured the expression of our Fluorescence reporters by flow cytometry, comparing the ΔEnvZ (JW3367-3) to wt (DH5a) E. coli strain. Furthermore, we used JW3367-3 and DH5a strains without our reporter system as negative controls. Cells were incubated in LB medium to OD600 = 0.2, washed using 100 mM MgCl2 and diluted 1:100 prior to measuring.

Negative controls (JW3367-3 and DH5a without reporter systems) showed only few to no fluorescence (Fig.1 A, B). GFP expression (Fig. 1 A) proved to be significantly higher in DH5a (green) cells as compared to EnvZ deficient JW3367-3 cells (pink). Although not as pronounced, this difference was also observable for eYFP expression in the respective cell lines (fig. 1 B). Differences in the expression of fluorescence reporters were confirmed by KS tests (GFP: p <= 0.001, eYFP: p <= 0.001). 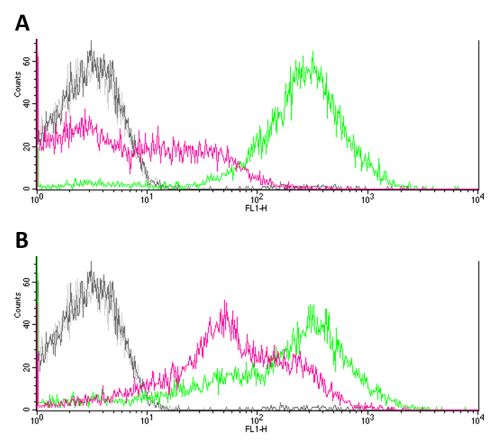 Leaky Expression by the OmpR-Regulated Promoter on Different Vectors On the basis of this finding, controlled gene expression by the OmpR-regulated promoter required a low copy plasmid or insertion into the chromosome. Protein expression of RFP in pSB1C3 with a copy number of 100-300 plasmids per cell, and pSB3K3 with a copy number of 10-12 plasmids per cell, was studied by flow cytometry. As for the determination of noise levels in the weak, BBa_J23114, and strong BBa_J23102constitutive promoters, the experiment was carried out in both LB medium and M9 minimal medium, the latter supplemented with 0.2% glycerol. In the LB medium, selection was carried out by the addition of 30 µg/mL chloramphenicol, 30 µg/mL kanamycin, or 50 µg/mL ampicillin, depending on the resistance, and for M9 minimal medium, the concentrations used were 60 µg/mL chloramphenicol, 60 µg/mL kanamycin, and 100 µg/mL ampicillin. Excitation of RFP was at 561 nm, and emission was measured around 580 nm. Expression levels in both E. coli MG1655 and E. coli MG1655 ΔompR were studied to determine the baseline of the leaky expression not influenced by intrinsic pathways including the OmpR transcription factor.

Figure 2. Flow cytometric fluorescence measurements in arbitrary units as a function of time. Left: Cultures were grown in LB medium. Right: Cultures were grown in M9 minimal medium supplemented with 0.2% glycerol. Fluorescence of RFP expressed by the the OmpR-regulated promoter on the high copy vector, pSB1C3, and the low copy vector, pSB3K3, in MG1655 WT and ΔompR MG1655 strain. All fluorescence levels were measured relative to the negative control WT E. coli MG1655, and the weak and strong constitutive promoters are included as references. Standard error of mean is shown, but are in several cases indistinguishable from the graph.

Fluorescence levels in the two different media display similar behavior, as seen in Figure 2. The main difference observed, was that the decrease in fluorescence over time was faster in LB medium than in M9 minimal medium, in concordance with the observations made in previous experiments. On a general level, the data revealed, that MG1655 cloned with the POmpR-RFP reporter system on the high copy vector exhibited a fluorescence level, equivalent to that mediated by the strong constitutive promoter. On the low copy vector, the POmpR-RFP reporter system yielded a fluorescence level comparable to the gene expression mediated by the weak constitutive promoter. On the other hand, expression levels in the MG1655 ΔompR strain were markedly reduced compared to MG1655, indicating that pathways including the transcription factor OmpR interfere with RFP expression under these conditions. Again, the fluorescence levels observed for the POmpR-RFP reporter system on the low copy vector were distinctly lower than for the high copy vector.
All things considered, the OmpR-regulated promoter was found to exhibit leaky expression comparable to the expression levels mediated by the constitutive promoters. When cloned into a low copy vector, the leaky expression was reduced prominently. Thus, to obtain proper regulation of gene expression by the OmpR-dependent promoter, a low copy vector is required.

Part:BBa_R0082 was first submitted by the Antiquity 2004 team, and additional characterizations were performed by the Hamburg 2016 team. For the 2019 edition, our team will provide additional experimental data related to the influence of this part in the growth kinetics of a wild type NEB-5 alpha strain. For this, we will use a construct comprised of ompC+GFP cloned into the pSB1C3 vector to transform NEB-5 alpha cells. We will then grow our transformants in media with varying concentrations of NaCl and sucrose to evaluate their growth kinetics at high osmolarity using a standard growth curve assay. Culture conditions and determination of cell growth and fluorescence

E. coli was grown in Luria-Bertani broth at 37°C with vigorous shaking. When necessary, ampicillin (Amp) (Sigma-Aldrich, St Louis, MO, USA) was added to the culture medium (100 µg/mL) Plate media were prepared by adding agar to liquid broth at a final concentration of 1.5%. Osmotic pressure conditions studied included NaCl (1, 5, 10, 20 and 40 g/L, and without NaCl), and dextrose (5 and 10%).

For the assessment of expression of GFP fluorescence during growth, the microtiter plate assay system Varioskan Flash (Thermo Fisher Scientific, Waltham, MA, USA) was used. All measurements were conducted in sterile 96-well bottom microplates (Nunc, Rochester, NY, USA) with a final assay volume of 300 µl/well. Overnight cultures were diluted into fresh LB medium before growth with different appropriate experimental additives (NaCl or dextrose). The microplates were incubated for 24 h at 37°C. Measurements were made at 1 h intervals. During cultivation, the Varioskan Flash provided quantitative online data of (i) cell density via measuring OD600 and (ii) in vivo GFP expression: GFP fluorescence was monitored at 511 nm upon excitation at 488 nm. We prepared LB growth media for E. coli BL 21 strain with varying amounts of NaCl- with final Na+ concentrations of 0.033M, 0.048M, 0.078M, 0.131M. 0.171M, 0.214M, 0.256M and finally 0.299M. Cells containing the composite part BBa_K4061070 which has OmpC regulated eGFP were cultured in the above media for 16 hours. We measured fluorescence intensity from the culture for all different concentrations along with negative-plasmid control, wild type BL 21 cells. The samples were excited at 488 nm and emission was read at 507 nm. In order to correlate the external medium concentration to intracellular osmolarity, we lysed cultured cells and measured the osmolarity of the supernatant using an osmometer. We found an exponential relationship between extracellular medium osmolarity and intracellular osmolarity. For clarity sake, we will still present data in terms of external medium concentration.

With increasing medium osmolarity, as a result of increasing medium Na+ concentration, the eGFP intensity is seen to increase 2 fold. The intensity increases from 10,000 AU to 20,000 AU. A negative plasmid control with WT BL21 cells is also measured for fluorescence intensity. Therefore, we can conclude that PompC is favourably activated at higher osmolarities. 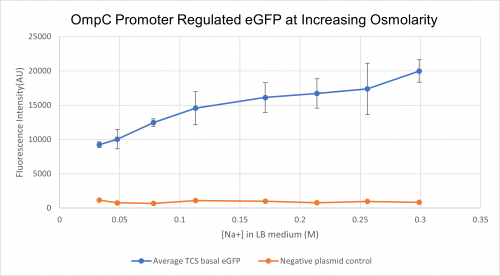 Two cells ( E. coli BL21) were transformed with 2 constructs- Constitutively expressed mRFP1 and Constitutively expressed mRFP1_pOmpC regulated antisense RNA. We cultured these cells in LB media of increasing NaCl concentration and observed the efficiency of the antisense RNA to suppress the fluorescence. The rationale was that at higher osmolarities, the OmpC promoter would be more active, producing more antisense RNA and hence suppressing more fluorescence from mRFP1.

As seen in the graph below, the PompC regulated antisense RNA indeed is able to suppress fluorescence at higher medium osmolarities . This supports the hypothesis since the antisense mRNA is under the regulation of the OmpC promoter, which is more active at higher osmolarities. However, surprisingly, the efficiency of the promoter or perhaps even the precision of measurement seemed to drop at higher osmolarities. It could either be that the cell was undergoing extreme stress at such high osmolarities and the death rate was higher, which renders the data beyond a 0.256M of NaCl in LB inconclusive. 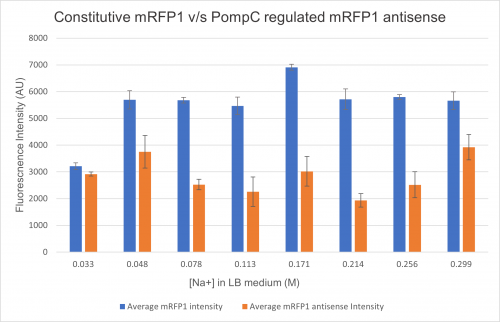 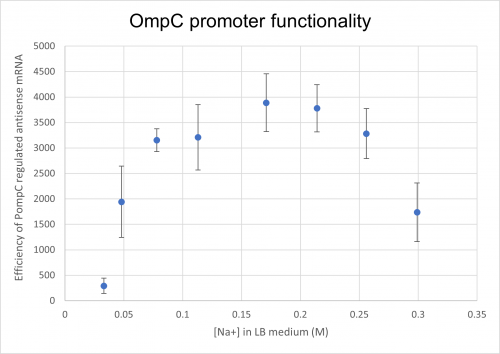 Graph 2. Difference between the fluorescence intensities of constitutive mRFP1 with and without the antisense RNA