RFP is controlled by promoter PcstA, which can be activated by CRP-cAMP complex. Therefore RFP will be expressed at low glucose concentration.

Vilnius-Lithuania 2019 iGEM team contributed to the description of Part:BBa_K861173 by measuring growth kinetics of bacteria containing this construct in different conditions. Measuring systems dynamics has superior precision compared to single-point measurements and leads to more straightforward application of data to a mathematical model. In the case of this part characterization, knowing the change in output by varying the glucose concentration, allows the part to be used in controlling the protein of interest level in the cell.

For measurements, the iGEM community protocol suggests using LB media. From our experience, a significant drawback is its considerable autofluorescence, which restricts measurement precision, especially for low expression systems. Also, performing measurements in M9 media allows more control in varying the growth environment. For these reasons, we chose to use M9-CA media.

R code was written for data analysis and visualization.

A 9 fold difference was observed between bacteria, grown in M9-CA, containing 5% and 0% glucose. Also, a difference in output, when grown in glucose and glycerol containing media can be seen, which can be explained by the difference in by the metabolic pathways used by the tested cells. 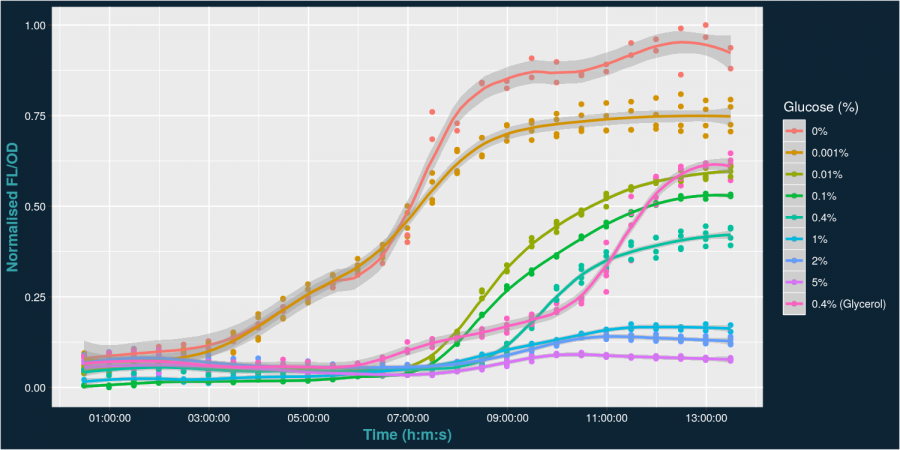 Vilnius-Lithuania 2019 iGEM team suggests future teams that choose this part for characterization to measure kinetics with different carbon sources and varying their concentrations.

BBa_K861173 has a mRFP controlled by PcstA which is a Glucose repressible promoter. It has been shown by previous teams that with the increased concentration of glucose there is a decrease in the activity of PcstA. Team iGEM IISER Kolkata is trying to characterize what is the effect of increasing concentration of other glucose analogues on the same system.

BBa_K861173 was used to characterize the promoter activity of PcstA in a range of concentration of glucose and its analogues in the growth media. Decrease in mRFP fluorescence with increase in concentration of glucose, fructose and xylose. The data for rest three sugars viz. sucrose, maltose and arabinose has not been shown as they show no clear co-relation of mRFP production and sugar concentration Comparison of mRFP fluorescence in M9 media supplemented with different sugar source at 30mM concentration. Here the control contains untransformed DH5α grown in LB media under a similar condition like that of test samples