The sequence for this subunit was derived from the 2E silk subunit from Brooks et al. (2008), which is based on the native sequence of the MaSp2 silk gene in Argiope aurantia. The 2E silk subunit contains codons for only six amino acids in the following proportions: glycine (44.1%), glutamine (17.6%), proline (14.7%), alanine (11.8%), serine (7.4%), and tyrosine (4.4%). The native Argiope aurantia codon usage profile is significantly different from E. coli ’s and the GC% of the DNA molecule itself (75%) is significantly different from the average GC% of native E. coli genes (51%). These features can make the native form of the gene difficult and slow to produce for the ribosomes in the cell as the necessary tRNA molecules are present in lower concentrations in E. coli and the genetic machinery of E. coli is not adapted to opening DNA of high GC% when making mRNA, and thus lower amounts of spider silk mRNA are produced.

This part is designed for use as an internal subunit in a longer spider silk construct. This part should be preceded by the BBa_K844008 silk subunit, which is identical to this subunit but contains an added Met (ATG) start codon upstream, and should be followed by either more repeats of this subunit or end with a BBa_K844000 part, which contains a 10-Histidine tag and a double stop codon (TAATAA).

This part was designed by entering the 2E DNA sequence into the Gene Designer software from DNA 2.0 and translating it. Codon optimization was performed, not using the Gene Designer software algorithm, but by hand. First, the list of tRNA genes in E. coli K-12 (which is very closely related to the lab strains of DH5α and BL21) was obtained from the Genomic tRNA Database, and the list of codons that were recognized by these tRNA anti-codons for each of the six amino acids present in the 2E construct was generated. New codons were selected so that they contained the minimum possible GC% for that amino acid and were included on the list of recognized anti-codons by known E. coli tRNA genes. The “F” construct BBa_K844003 was designed using the fewest possible codons, only one for each amino acid while the “B” construct BBa_K844004 utilizes two codons for glycine, proline, and serine as these were the only amino acids that had multiple codons with low GC%. Alanine also possessed two codons with low GC% that had known E. coli tRNA genes, but inclusion of both codons would have created PstI restriction sites in the silk subunit which conflicts with the Assembly Standard #23 (Silver Fusion) cloning method, so it was left with a single codon in the “B” construct. The two codons for the glycine, proline, and serine amino acids in the “B” construct were distributed roughly evenly across the gene, while avoiding the creation of any restriction sites in the sequence that would interfere with Assembly Standard #23 (Silver Fusion). 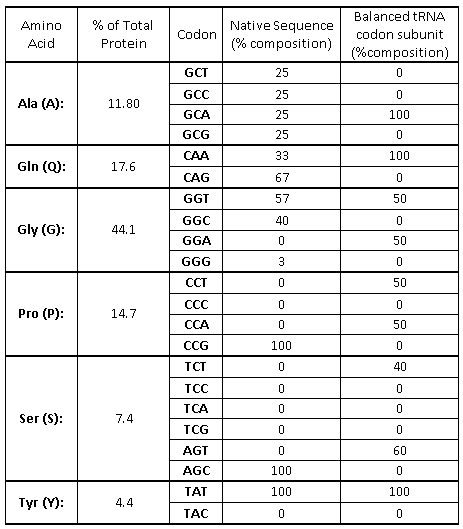 BBa_K844003 – another codon optimized spider silk subunit, but with only one codon used for each amino acid