10x-Histidine tag with double stop codon TAATAA to allow for better extraction and purity of tagged products and protein termination in a single part.

This part is a 10x-Histidine tag with two stop codons on the 3’ end. It is intended to be cloned downstream of a protein or protein subunit lacking a stop codon using Assembly Standard #23 (Silver Fusion); the 10x-Histidine tag can then be used to extract the protein using Nickel-based affinity columns. Proteins on gels or in cells can also be analyzed with His-tag specific antibodies or dyes.

This part is also an improvement over existing histidine tags as it includes the standard BioBrick double stop codon (TAATAA) after the 10x-His tag, avoiding the need for an additional cloning or mutagenesis step to add in stop codon sequence.

IMPORTANT NOTE: Any dyes, antibodies, affinity resins, etc. designed for use with 6x-Histidine tags will work with this 10x-Histidine tag, and in most cases should work better.

This 10x-Histidine tag was used to isolate and analyze spider silk protein produced by the 2012 Utah_State iGEM Team. Below is a Coomassie stained SDS PAGE gel showing the spider silk protein (~25.4 kDa) that was purified using a Nickel affinity resin column. The protein in the lane is nearly pure, with only minor bands at 24 kDa and 15 kDa as contaminants. The 10x-His tag aids in producing highly pure protein samples as it binds more tightly to the column, allowing higher concentration wash steps to be used to remove contaminants from the sample. Also, below is a Western blot utilizing an antibody that binds specifically to histidine tags, showing a spider silk protein band at the correct molecular weight (~25.4 kDa). This demonstrates that the 10x-histidine tag is functioning and is compatible with staining and antibody techniques used with 6x-histidine tags. 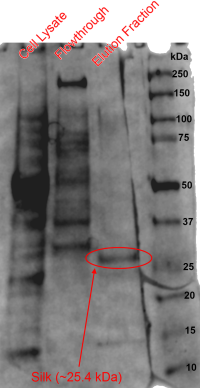 Figure 1. Coomassie blue stained SDS PAGE gel showing highly pure spider silk sample. Protein expressed is BBa_K844016. The first lane contains the cell lysate sample. The second lane is the flowthrough from the column; note the absence of spider silk band from this flowthrough, indicating the high affinity of the 10x-His tag. The third lane is the eluted spider silk band, with only very minor contaminating bands. The last lane is the Bio-Rad Precision Plus Dual Color Protein Standard, with protein sizes indicated in kDa. 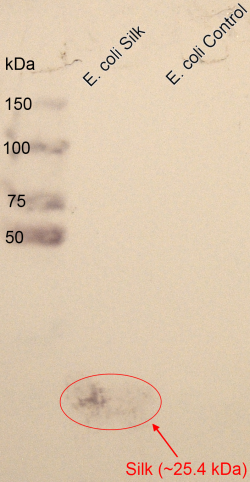 From our experiments, we found that the expression of 10x Histidine tag didn't affect the behavior of another encoded protein (CRYAB's response to oxidative stress). Protein with his tag was not eluted through using the commercial Capturem His-Tagged Purification Miniprep Kit. However, we showed that protein with his tag binds to the nickel column by comparing the protein concentration of the flowthrough. 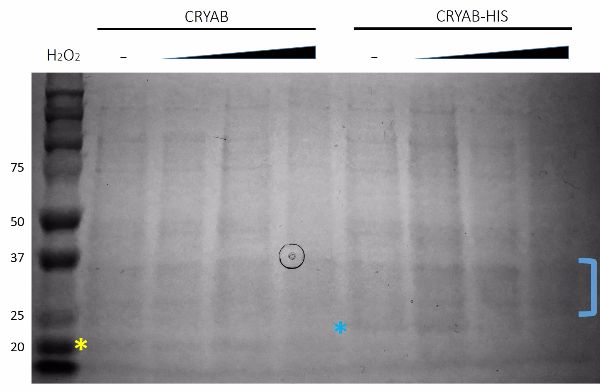 H2O2 causes human CRYAB proteins to aggregate. The expected size for CRYAB (yellow asterisk) is 20 kDa and 21 kDa for CRYAB-HIS (blue asterisk). Adding H2O2 results in a decrease of the original bands at 20 and 21 kDa, and an increase in larger proteins (blue bracket). CRYAB and CRYAB-HIS both increased in size after adding H2O2, suggesting that the addition of a 10x Histidine-tag does not affect the expected behavior for oxidative stress.

More information on the procedure is shown in TAS_Taipei 2016 under 'Wiki Standard Page' 'Description'.

A series of searches of the parts registry were conducted to determine what His tags exist prior to the creation of this part. The vast majority of parts containing His tags were basic parts with the His tag incorporated into them, rather than independent tags; most of the these parts likely were chemically synthesized with the His tag attached or had it added later through PCR or mutagenesis. Very few independent His tags exist in the registry, and below is a brief description of the ones we found and a discussion of how this part differs or improves upon them.

Bba_J70044 - This part is a 6x-His tag with a single stop codon. It contains additional glycine and serine residues upstream of the His tag, and seems to be utilized only in conjunction with the BioScaffold system used by the Knight lab in 2009. The BBa_K844000 10x-His tag improves on this part by extending the His repeat region to 10x, removing the additional glycine and serine residues upstream, and adding an additional stop codon downstream to ensure protein termination. BBa_K844000 is also readily compatible with the Assembly Standard #23 (Silver Fusion).

BBa_J18909 - This part is an E. coli codon optimized 6x-His tag and has the prefix and suffix for Assembly Standard #25. The BBa_K844000 10x-His tag improves on this part by extending the His repeat region to 10x, and adding the double stop (TAATAA) downstream of the His tag to ensure protein termination, without the need for an additional cloning step for the stop codon. The E. coli codon optimization on BBa_J18909 appears to be in the form of only using the CAT codon for histidine, whereas the BBa_K844000 mixes the CAT and CAC codons. This codon optimization isn't expected to make a large difference in terms of expression as E. coli uses CAT ~62% of the time and CAC ~38% of the time, so neither codon is extremely rare. BBa_K844000 is also readily compatible with the Assembly Standard #23 (Silver Fusion) cloning system.

BBa_K112703 - This part is a 6x-His tag usable in Assembly Standard #21. This also includes an Met (ATG) codon upstream of the His tag, and lacks any stop codons downstream. The BBa_K844000 10x-His tag improves on this part by removing the upstream Met (ATG) codon, extending the His repeat region to 10x, and adding the double stop (TAATAA) downstream of the His tag to ensure protein termination, without the need for an additional cloning step for the stop codon. BBa_K844000 is also readily compatible with the Assembly Standard #23 (Silver Fusion) cloning system.

BBa_K549019 - This part is a 10x-His tag with a downstream stop codon, compatible with Assembly Standard #21. When this part is translated, the amino acid sequence containing the 10x-His tag is:

This sequence contains an upstream stop codon which if included as part of a fusion protein would prevent the 10x-His tag from even being incorporated into the protein, as well as many additional amino acid codons. The BBa_K844000 10x-His tag improves on this part by removing the upstream stop codon, removing the additional amino acid codons residues upstream and downstream of the His Tag, and adding an additional stop codon downstream to ensure protein termination. BBa_K844000 is also readily compatible with the Assembly Standard #23 (Silver Fusion) cloning system.

BBa_K844016 - A spider silk protein generator part with this 10x-His tag attached to the C-terminus end. The SDS Page and Western blot figures above were created using BBa_K844016.