This is a composite of 2 different BioBricks formed by a standard assembly, forming a scar in between. It contains the following units: AraC-AraO2-AraO1-AraPromo(PBAD-RBS-PhoA-His6tag-pNBEst13-Myctag-EstA which is similiar to BBa_K808000 & BBa_K808030 It is an operon, being induced by adding 0.02% to 0.5% of L-Arabinose. It is made for regulating the cell surface expression of our PET cleaving enzyme pNB-Est13, which is anchored C-terminal to EstA.

This site is about the expression rate of BBa_K808032 and its activity in three different E.coli strains:

To get a more information about our composite part BBa_K808030 please take a look at its own registry page.

Our part BBa_K808032 regulates the expression of a chimeric protein (BBa_K808030) consisting of the following parts:

The functionality of BBa_K808032 is shown by the following methods:

Of course the first step for showing any kind of functionality is to perform a SDS PAGE(Figure 1). E.coli Top10 is transformed with BBa-K808032 and induced at an OD600=0.5 with the arabinose concentrations of 0.02%, 0.2%, 0.5% and no arabinose at all (serving as a negative control). Incubation occured at 30°C over night. Afterwards the expressed chimeric protein gets purified. The resulting supernatant is loaded but the cell debris pellet is treated with an special detergent (n-Dodecyl β-D-maltoside) ,in order to solve our membrane bound protein, and is loaded as well. We were able to express our protein and to spot it on our SDS PAGE (Figure 1), where as our neagtive control showed no expression. 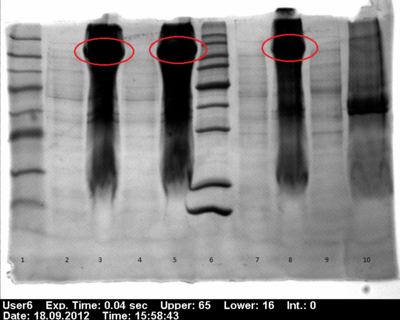 Figure 1: Expression level of BBa_K808032 in relation to the level of induction. Arabinose concentration (used for induction) decreases from left to right, starting with 0.5% and ending with no arabinose at all. Lane 3, 5 ,7 (pellet treated with detergent) show that our protein gets expressed whereas our negative control in lane 9 remains unexpressed

To be sure that our protein is expressed we performed a Western blot (Figure 2). Our construct contains a myc epitope, downstream of pNB-Est13. This myc tag is used for detecting whether our surface expression is successful or not. The expression host is E.coli DH5 alpha, transformed with BBa_K808032, and induced at a OD600=0.6 after being incubated for 20 min on ice with arabinose concentrations of 1.5%, 1% and 0.5%. The incubation on ice and the higher arabinose concentrations are crucial for using other expression hosts than Top10, due to their ability to metabolize L-arabinose. The SDS PAGE was performed with supernatant and pellet being treated with a detergent (similiar to Figure 1). 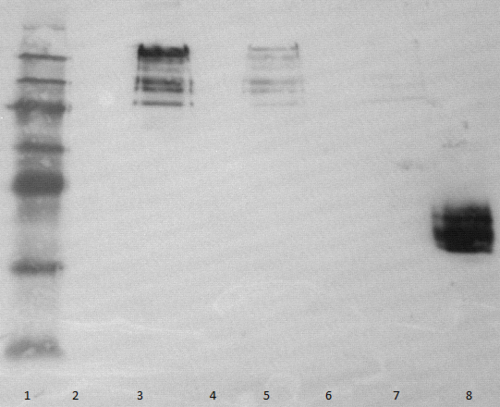 Figure 2: Westernblot of BBa_K808032 expression. Induction level decreases from left to right, starting with 0.4% arabinose in lane 2 and ending with 0.1% arabinose in lane 6. Lane 3, 4 and slightly lane 6 show good results. The lanes showing positive resulst contain pellet treated with detergents. This proofs that our chimeric protein used to be integrated into the membrane. Our construct contains a myctag, which we were able to detect on our blot. Lane 3, 4 and slightly lane 6. Lane 8 is a myc positive probe and worked, too.

Flow cytometry is good for quantifiying the rate of cell surface expression. Our construct contains a myc tag, allowing us to perform an antibody staining. The second antibody is biotinylated and can be conjugated to streptavidin, being labeld with a fluorescent marker. We used Streptavidin, R-phycoerythrin conjugate (SAPE). Once the fluorescent labeled antibody has bound to the cell surface the relative absorption can be measured and the marked cells can be detected by our flow cytometer (Accuri C6 flow cytometer). We transformed E.coli Top10 with BBa_K808032 and induced at an OD600=0.5 with an arabinose concentration of 0.02%, 0.2%, 0.5% and no arabinose at all (serving as a negative control). The antibody staining was performed after 3 h of incubation at 30°C. The stained and marked cells were counted by our flow cytometer (Figure 3), showing us wether our expression worked (showing charactersic absorption, so the antibody was able to bind to the surface expressed myctag) or not (negative probe shows different absorbance compared to induced cells). Figure 3 proofs that our induction and surface expression worked well, because there is no maxima of absorption at the same wavelength of the negative control. This means that all our cells have been marked with the fluorescent labeled antibody. 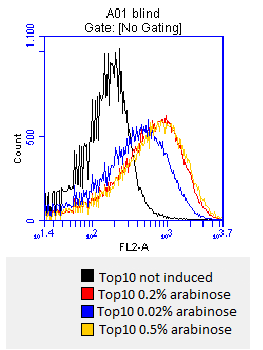 Figure 3: E.coli Top10 carrying BBa_K808032 and induced at an OD600=0.5 with an arabinose concentration of 0.02%, 0.2%, 0.5% and no arabinose at all. The relative absorbance of 50000 cells was meassured and is shown in this plot. The induced cells show a significant difference in their absorption due to the binding of a fluorescent labeled antibody. Fot this antibody staining we used an anti-myc antibody.

We transfromed the E.coli strains Top10, DH5alpha and Mg1655 with BBa_K808032 and inoculated Tributyrin agar plates. The same strains but carrying only BBa_K808030. They are missing the arabinose inducible promotor, serving as negative controls(Figure 4). The concentration of arabinose used for induction was around 0.5%. Incubation occured at 30°C over night. The next day clear lysis areas were visible, surrounding the respective colonies. 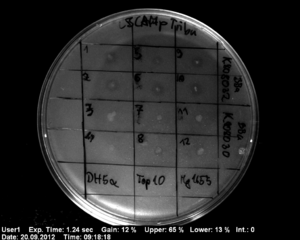 Figure 4: Top10, DH5alpha and Mg1655 carrying BBa_K808032 are incubated on Tributyrin agar plates over night at 30°C with an arabinose concentration of 0.5% for induction. BBa_K808032 works, because its catalytic domain degrades the Tributyrin, resulting in lysis areas. In contrast the same strains are incubated below, but carrying only BBa_K808030. They are missing the arabinose inducible promotor, serving as negative controls.

Of course a longer incubation results in bigger lysis areas. The plate in Figure 5 was incubated one night at 30°C and 2 days at room temperature. It contains DH5 alpha, carrying BBa_K808032. Colony 6 only carries BBa_K808030. An arabinose concentration of around 0.2% was used for induction. 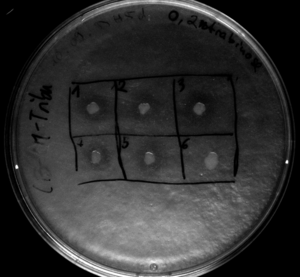 Figure 5: DH5alpha carrying BBa_K808032 (colony 1-5). Colony 6 serves as a negative control, carrying BBa_K808030. This part misses the arabinose inducible promotor. A clear lysis area is visible after incubation one night at 30°C and room temperature for one day.

Using Tributyrin agar plates gave us a good qualitative proof of hydrolytic acivity, but an assay was needed to quantify the enzymatic activity of our induced cells. For this reason we performed a pNP-Assay using induced E.coli Top10 with an OD600=0.1-0.025 (suspended in PBS-buffer) as catalysts and para-Nitrophenylbutyrate as a substrate. We were able to quantify the relation of substrate degradation and induction. The hydrolytic activity is quantified by the slope of the respective straight line in Figure 6. For more information about our activity tests please take a look at our labjournal. 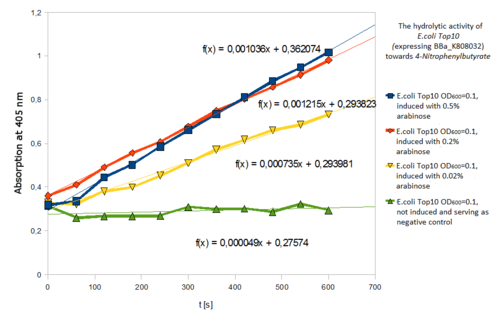 Figure 6: Bacterial pNP-Assay using induced cells (Top10) with an OD600=0.1-0.025 (in PBS-buffer) as catalysts and para-Nitrophenylbutyrate as a substrate. The hydrolytic activity is quantified by the slope of the respective straight. 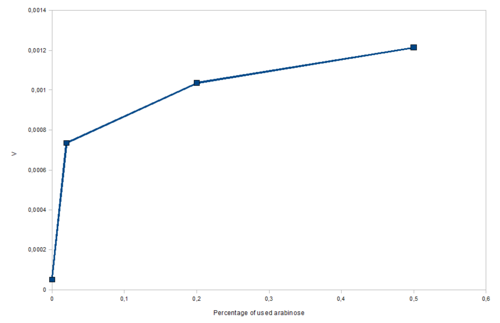 Figure 7: Plot shows relation of the slopes from Figure 6, representing the hydrolytic activity, in coherence with the level of arabinose concentration in % used for induction.