Released HQ 2013
Sample In stock
Experience: None
3 Uses
Get This Part

A cutinase is a cuticula degrading hydrolase from the fungus Fusarium solani pisi. It shows activity towards PET.

The characterization of FsC occured in 3 different ways. 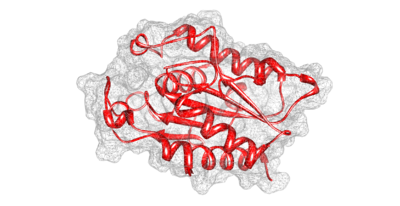 Figure 1: Homology model of Fusarium solani cutinase, special thanks and regards to our Simulation Lab
We extracted binding energy from the atomic B-factors and the binding constant from the atomic property derived from all our calculations. We used scatter plots with the binding constant and the inhibition constant in order to compare the plasticizer as well as the PET substrate. We compared the binding energies as well as the inhibition constant from the best ranked docking runs.

Here, OET (dimeric state) became our reference substrate, meaning if an additive exhibits a higher inhibition constant it may effect our protein. Otherwise, if a binding energy exhibits a higher level than OET we can conclude that an additive may accumulate on our protein surface. Moreover, we compare the binding as well as the inhibition energies of the additives with itself to identify the strongest binder. Since we know the active site of the Fs. Cutinase and the PnB Est. 13, it will be interesting if a plastizicer may dock there. In order to analyze that, we counted the residues which are involved within every docking simulation. Therefore, we measured the distance of every ligand to its corresponding receptor with an appropriate threshold and thus identified the residues.

For the sake of convenience of this page, please visit our Simulation Lab > Docking Simulation for further informtion.

Atomic force microscopy is used to make very precise surface analysis up to nanometer scale. The goal was to indentify differences between different modifications of polyethylene terephthalate and to proof enzymatic degradation by changed surface properties.

A piece of a PET water bottle is melted between two metal plates using a heat gun to create a flat sample. It is incubated for 24 h at 37 °C after applying a solution of 90 µmol/L FsC. The Sample is washed with distilled water and dried in a cabinet dryer at 60 °C for 1 h. The samples are investigated using AFM. Surface modifications of PET induced by FsC could be observed in form of circular perforations. Measurements in this area show a surface profile of (±100 nm). Measurements of the reference show a surface profile of (±30 nm). The pictures below show surface profiles and light microscopic captures of the non treated PET reference and the FsC treated PET surface. 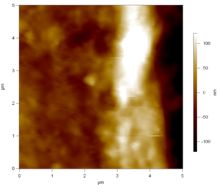 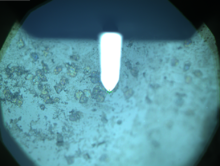 AFM of the PET surface as reference: 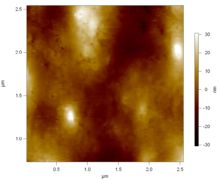 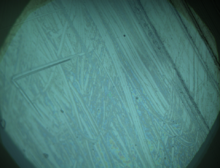 Pieces of PET foil were added to a 2 µmol/L solution of FsC. The solution was constantly agitated in 50 mL falcon tubes. After 7 days the samples were washed with distilled water and dried in a cabinet dryer at 60 °C over night. Afterwards the samples are investigated using AFM. FsC induced surface modification of PET could be observed. The Pictures below show 3D models, height profiles and the cantilevers amplitude as well as the phase deviations. The 3D models give a first impression of the texture of the surface. Looking at the height profile and the amplitude deviation more detailed informations about the surface texture can be obtained. The reference samples show a very flat surface (±3 nm). Bigger deviations are due to manufactionary mistakes of the foil. FsC treated surfaces show a deviation ten times bigger than non treated ones (±30 nm). Comparing the phase deviation of FsC treated surfaces with the reference, there can be seen big diferences due to varying mechanical properties. These are caused by degradation by FsC. The Polymer chains are cut in to smaller pieces which then stand out of the surface, letting it swell. The resulting surface is not only rougher but persumably less dense and therefore less firm. 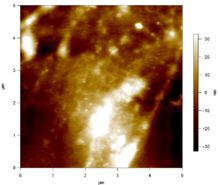 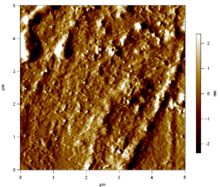 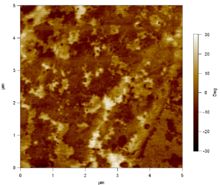 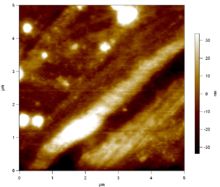 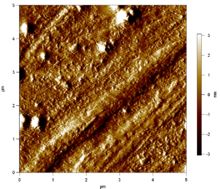 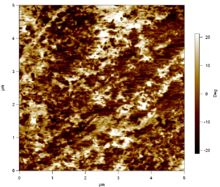 AFM of PET foil as reference : 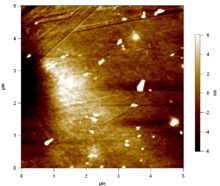 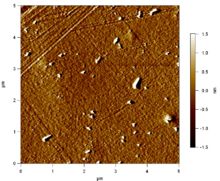 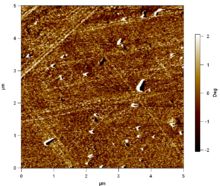 We used a pNP-Assay in order to describe.

Conditions were set at: T = 34°C and pH = 7.4. The method is simple. The absorption is measured every minute over 30 minutes by an ELISA reader capable of 96 well plates, after addition of enzyme. The released pNP-group has a typical absorption at 405nm wavelength.

The mechanism of pNPB degradation. The release of pNP is measured by the characteristic absorption at 405 nm 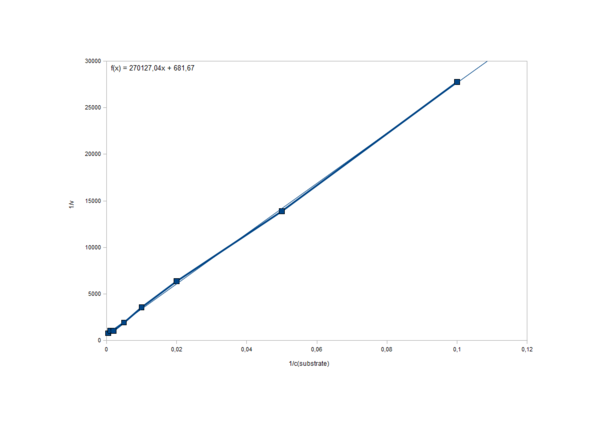 Lineweaver-Burk plot of the enzymatic activity of FsC. The kinectics were quantified by measuring the absorbtion at 405 nm over time. 405 nm is the characteristic absorption of pNP, being released due to hydrolytic activity of FsC

To find Km the growth of the first twelve data points were written down in another diagram. The slope of the regression line gave the speed of the hydrolysis for the single substrate concentrations. Now the value of the speed with the associated concentration of substrate were plotted in a Lineweaver-Burk diagram. At the point where the regression line is crossing the x-axis the x-coordinate amounts to -1/Km. So Km is about 400µM. To calculate the value of Vmax we used the point where the plotted line crosses the y-axis. The associated y-coordinate is 1/Vmax. Consequently Vmax for 5nM FsC is 0,001467 1/s.

The Kcat value is calculated through dividing Vmax by the enzyme concentration of 5nM. Kcat counts 0,293395 1/mol*s.

For a more visual proof of enzymatic activity we used Monomethyl terephthalate as a substrate and FsC as a catalyst. We used bromthymol blue as an indicator. The release of COOH groups, due to hydrolytic degradation by FsC results in a colometric change from green to blue. For a more detailed description please visit our labjournal> Degradation of monomethyl terephthalate

Principle of degradation of monomethyl terephthalate. 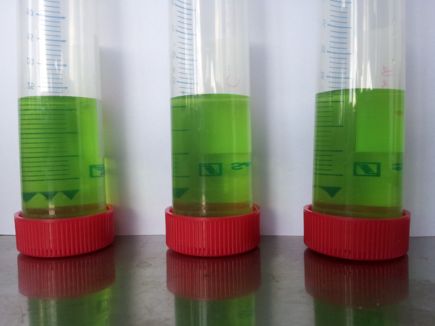 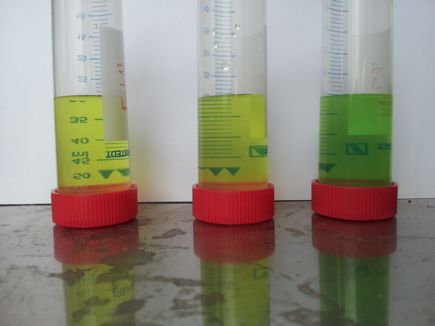 This part was used by Tianjin 2015 in its Stimulated Plastic Enzymolysis.We aim to enhance the effect of FsC by the addition of hydrophobin and make them into a fusion protein. We could provide abundant data about its expression in E.coli. You could also find its fusion protein in BBa_K1582020, BBa_K1582021,BBa_K1582022 and BBa_K1582023.

We can tell the difference (in red circle) between non-induced and induced. The amount of protein after induced is larger than non-induced and molecular weight is about 25kDa which is target protein’s molecular weight. So we infer that FsC can express in E.coli BL21.
·Inoculation of LB-media with BL21_ FsC _pET-28a; Overnight incubation at 37°C
·Dump cultivated bacteria into 1L liquid LB medium. Cultivate for 4h at 37°C. Add 1M IPTG 500μL and induce at 16°C for 15h.
·Centrifugation of 1L LB medium at 4000rpm for 20min and discard supernatant.
·Crush bacteria with High Pressure Homogenizer.
·Centrifugation at 18000rpm for 30min.
·Purify protein with nickel column.

There is still a little protein combine with media after washing with 200mM MCAC.
Nanodrop measurements of the purified protein FsC: 0.414mg/mL
·Concentrate FsC with concentration tube and change the buffer from 200mM MCAC to 1X PBS because 200mM MCAC is noxious for enzyme. Final concentration is 2.870mg/mL