This part contains the promoter as well as the coding sequence for the repressor AraC which is transcribed in the opposite direction. (“upstream”) By binding to L(+)-arabinose, AraC changes its conformation. This causes the protein to diffuses from the DNA thereby inducing transcription.

This biobrick did measure up to our expectations as shown in the following data. We also used this promoter to express our PET cleaving enzyme pNB-Est13, which is anchored C-terminal to EstA.(E. Coli membrane anchor protein). AraC-Pbad shows a low background activity and a good respose to the induction with Arabinose. For more details: BBa_K808032 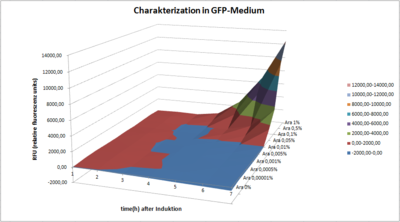 The promoter was characterized using GFP to measure gene expression at different arabinose concentrations. Cells were grown in 24-well plates in a defined medium (GFP-medium) that provided fast growth without interfering with fluorescence measurement. Measuring in LB-medium turned out not to be possible.

Results Cells showed fluorescence after 4-5 hours when grown in a medium containing >0.01 % (w/v) of arabinose. The response of the promoter to different concentrations turned out to be dynamic, and different levels of gene expression were inducible. E. coli DH5alpha was used for the measurements. 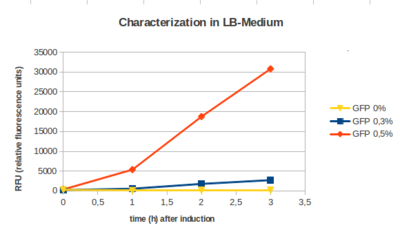 For overexpression of our genes we wanted to grow the cells in LB-medium. To find out how we had to scale and time gene expression we made another test using GFP. Because of the high background fluorescence it was required to transfer cells in H2O before measurement.

Results The response was larger in LB-medium compared to GFP-medium. Reasons for this might be the faster metabolism as well as slight presence of arabinose in LB-medium. This could lead to higher expression of receptors targeting arabinose and a faster response. Measurements were done in E. coli DH5alpha.

To characterize the promoter's leakiness, we amplified our constructs containing BBa_K808000 in E.coli. We then performed plasmid minipreps to extract circular DNA and sequenced this DNA.

However, we found some mutations in the promoter for part BBa_K2206007. This composite part contains BBa_K808000 (the promoter), BBa_K2206001 (our 27b-3p toehold switch) and BBa_E0040 (GFP). Therefore toxic levels of BBa_K2206007 were still produced. This indicates that the promoter has some leakage and may therefore be unsuitable for regulating the expression of lethal parts.

iGEM Groningen 2019 characterized the inducibility of pBad in V. natriegens. V. natriegens has been reported to have a remarkable doubling time of 9.8 min. As is the case for the better-studied but slower-growing E. coli, V. natriegens increases its number of ribosomes with the growth rate in order to achieve its extraordinarily high rate of protein synthesis. Multiple mechanisms contribute to this high ribosome synthesis efficiency, including high rRNA gene copy number; strong promoters that contain near-consensus −10, −35, and UP elements; and activation by the transcription factor Fis. In addition, V. natriegens rRNA promoters exhibit the relatively short-lived open-complex characteristic of rRNA promoters in E. coli, potentially contributing to the regulation of these promoters in vivo.

A construct of pBad-mCherry was designed using 3A assembly method and cloned in V. natriegens. The pBad promoter was characterized at different time points of 0, 2, 4, 6 and 8 hours after induction with different concentrations of arabinose of 0.01, 0.05, 0.1 and 0.5%. Further, the efficiency of pBad was measured by carrying out fluorescence measurements of the expression of mCherry on induction with different concentrations of arabinose. The screening was done based on quantifications of the fluorescence intensity measured. The best version of the promoter was determined based on fold change in the fluorescence intensity and low basal level. Our measurements show very high expression levels for a concentration of 0.5 % (w/v) arabinose and a very low basal level of expression without the inducer and the fold change amounts to 1127. In conclusion, pBAD offers a tight and regulation of expression in V. natriegens. 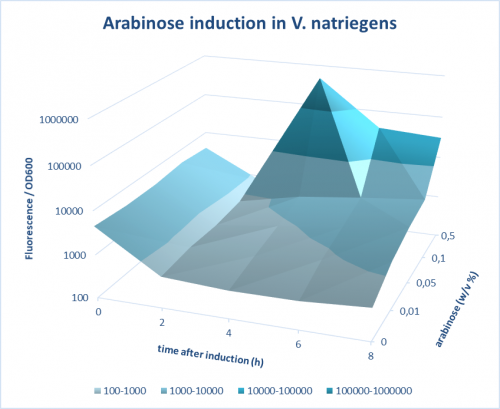