The team (NRPUEA 2012) decided to develop the PyeaR BioBrick (BBa_K216005) further by ligating it to its mammalian counterpart: CArG promoter sequence E9-ns2 (Scott, S.D. et al.2002). To provide additional restriction enzyme sites that may become useful during later cloning steps, BamHI, HindIII and NdeI were added between the 2 promoters. The genes were synthesised in two orientations, Bacterial-Mammalian (BBa_K774000) and Mammalian-Bacterial (BBa_K774001) as initially we were not sure what effect gene order would have on gene activity. The aim of this development was to increase the flexibility of the PyeaR promoter so that it could be used in both mammalian and bacterial systems. This is something that we thought was important as sensing nitric oxide in the human body has a wide range of therapeutic applications (please see the future applications section on our wiki).

A comparison between the growth of E.coli cells, before and after transformation with the bacterial-mammalian promoter, as well as the mammalian-bacterial promoter (BBa_K774001) and PyeaR + GFP composite (BBa_K381001))

The E.coli cells used in all studies are Alpha select gold standard cells from Bioline, which have a hight transformation frequency.

To begin, a colony was inoculated into 5ml of LB media overnight, the cells spun down the following morning and diluted with fresh LB until an OD reading at 600nm of 0.2 ± 0.01 was obtained. Three repeats were made of each sample.

The study lasted for 12 hours. An OD reading at 600nm was taken once an hour. Between the hour, the cuvettes were put into a 37ᵒC incubator to encourage growth and to standardise measurements across all of the growth studies. To calculate the number of cells in each sample, a calibration curve was set up. This involved using cultures of the E.coli cells which had not been transformed. The E.coli cells were diluted with different volumes of LB and OD readings were taken at the same time as plating on Agar plates. After a day of growth, the numbers on these plates were counted and recorded. The CFU/ml was calculated. When the OD readings (x axis) and the CFU/ml (y axis) readings were plotted, the equation of the line of best fit, gives a conversion for the absorbance readings. This allowed us to measure the growth. This is demonstrated in figure 1. 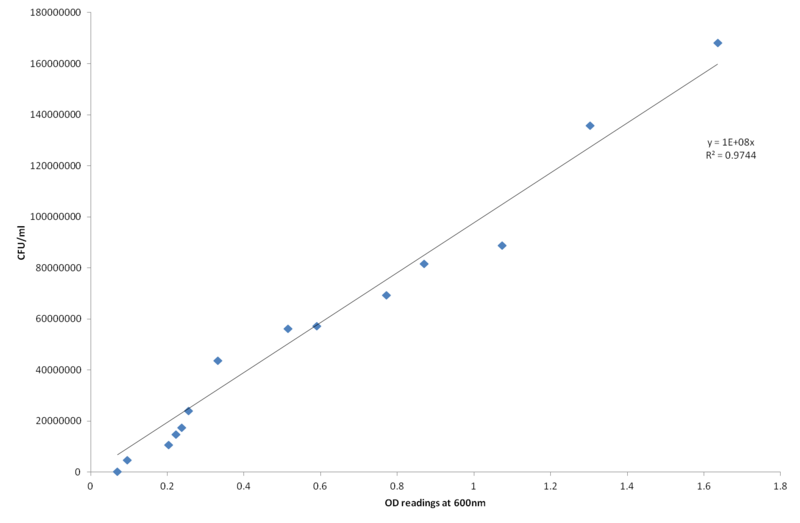 Figure 1. Calibration curve to calculate the conversion factor between OD reading at 600nm and the number of colony forming units growing per ml (CFU/ml) 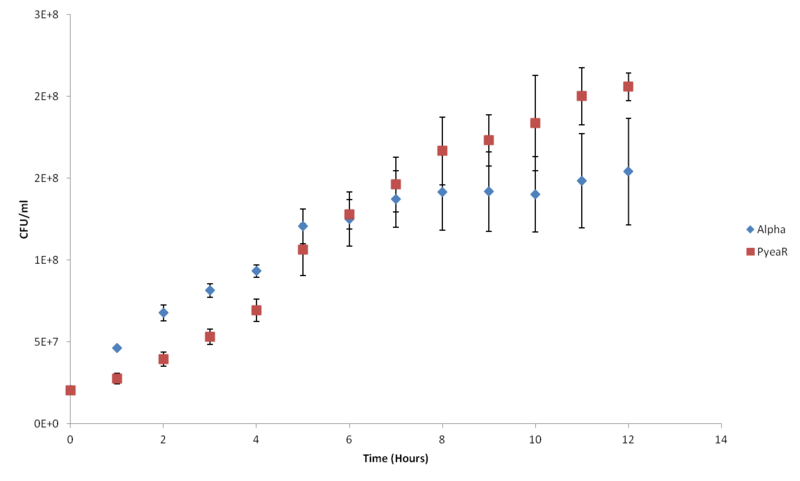 Figure 2. Growth of PyeaR transformed E.coli cells relative to Alpha cells (untransformed cells). Error bars show the standard deviation between the three repeats. For clarity reasons, lines of best fit are not shown The growth pattern and rate of E.coli cells with or without transformation with B-M and M-B show little difference. Any differences in growth rate were not significant. There was lots of overlap. As previously described, there was a significant difference between the growth rate of PyeaR and Alpha cells. There was also a significant difference between M-B/B-M and PyeaR cells. The statistical results can be seen in Table 1. 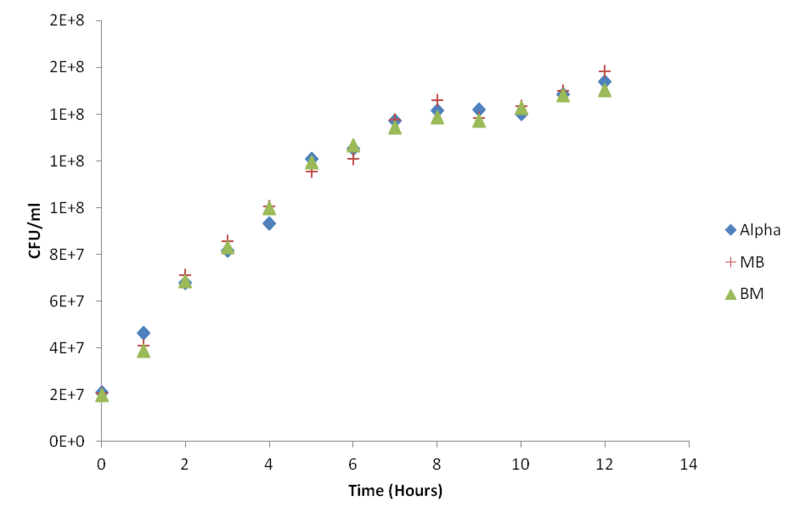 Figure 3.Growth over 12 hours of Alpha, M-B and B-M. Error bars and lines of best fit are not shown for clarity reasons.

From all the above graphs, it can be seen that with the starting concentration of cells as high as they are, the cultures are in exponential stage and do not undergo lag phase. A further growth study will be carried out on purely the lag phase with lower starting concentrations. As the starting absorbances here are approximately 0.2 at a wavelength of 600nm, the lag phase study will involve starting absorbances of 0.04 and lower. 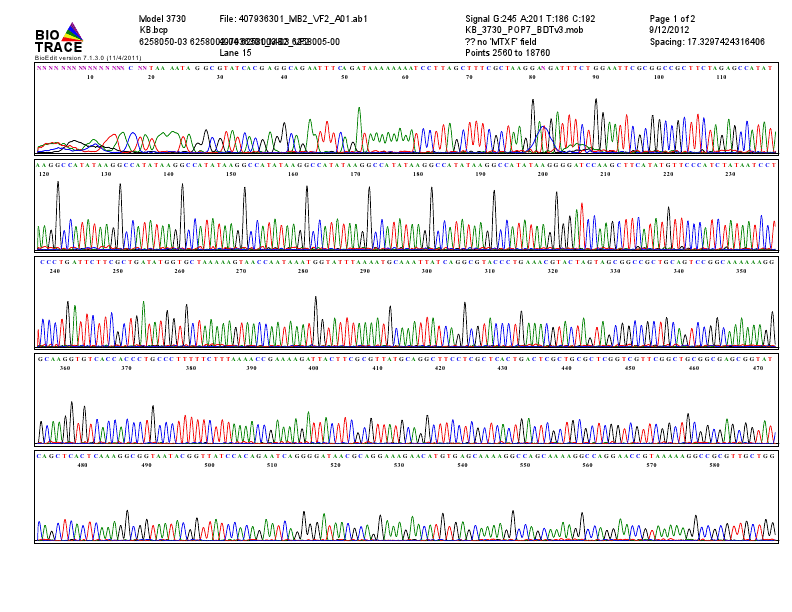 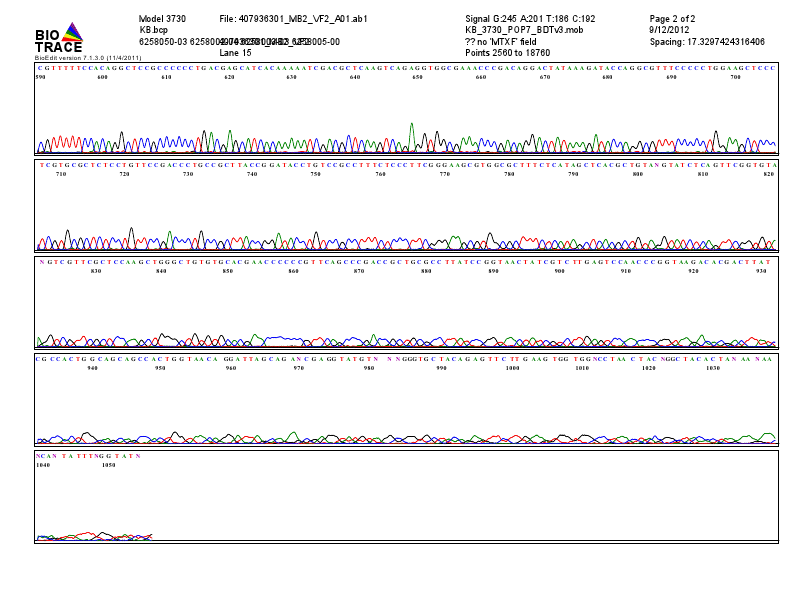 BLAST Analysis
To review the success of the sequencing of the BioBrick sample, the predicted DNA sequence was compared to the sequence data using a Pairwise BLAST analysis (bl2seq). The predicted DNA sequence was entered as the Query and the data from the sequencing analysis was entered as the Subject. The summary information at the top of the image identifies how many bases are identical between the two sequences. Lines joining the two sets of sequences indicate identical bases, and the absence of a line indicates a difference between the two sequences.

For this sample, the sequencing data is exactly as predicted. 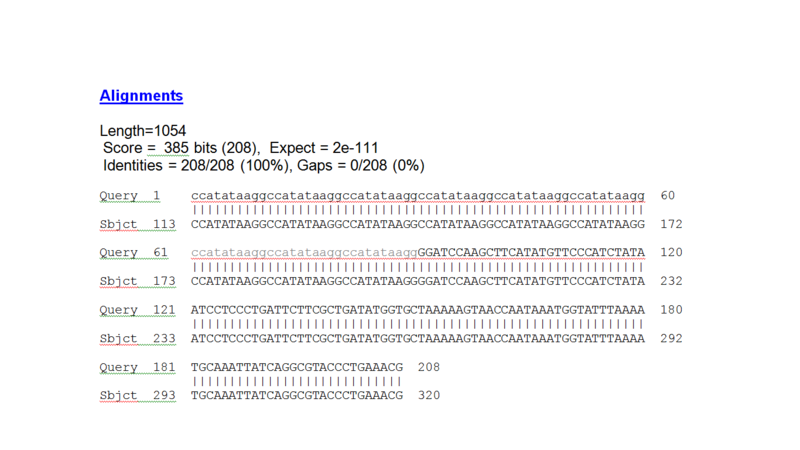