This construction is made up of two elements:

1. The transcription factor-binding site inside the promoter

2. the coding sequence, which contains a synthetic fluorescent (red) protein. Our construction uses the well-known high chaperon expression when the bacterium is suffering from heat shock [1]. We have taken the promoter sequence of groE, one of these proteins highly produced when heat shock [2]. When is the protein synthesized? In order to obtain the red fluorescent protein a condition has to be met. High temperatures for E. coli must be reached, like for example from 42ºC degrees. We focused on 44ºC because here we got the best results. 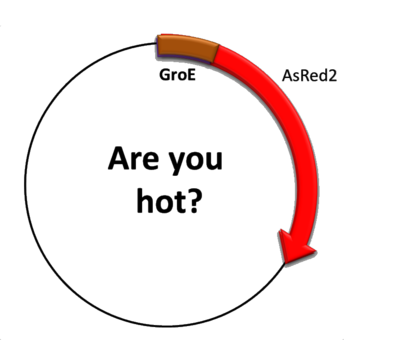 The molecular mechanism underlying this phenomenon is as follows: high temperatures are sometimes harmful for microorganisms, so they have adapted successfully for such a strong condition by synthesizing some proteins, called HSP (Heat Shock Proteins), that help in protein folding. Heat-shock response is mediated by the sigma32 factor [3]. This alternative sigma factor allows the RNA polymerase to bind to some consensus promoter sequence. groE has this sequence in its promoter [4]. That is because this gene encodes a chaperon protein, GroE. Chaperone proteins are a group of proteins present in all cells; many of them are heat shock proteins, whose function is to assist the folding of other proteins in the newly formed protein synthesis.

In the case of GroE, it processes a nonnative polypeptide in a cycle consisting of three steps. First, the polypeptide substrate is captured by GroEL. Upon binding of the co-chaperone GroES and ATP, the substrate is then discharged into a unique microenvironment inside of the chaperone, which promotes proper folding. After hydrolysis of ATP, the polypeptide is released into solution. Moreover, GroE may actively increase the folding efficiency, e.g. by unfolding of misfolded protein molecules. This chaperon has an important role in heat shock process too, helping other proteins not to denature.

How did we deal with this construction? We were able to activate the promoter after a heat shock, like keeping the culture at 44ºC during 5 min. However, since we wanted a very good modeling for this construction, we developed a lot of experiments with different temperatures, different times of incubation, as well as gradating the temperature ranging from 37ºC to 46ºC.

To test the heat-sensitive construction, an overnight culture of our E.coli strain carrying the AsRed2 gene under the control of groE promoter was set up at 25 ºC. After that, OD was adjusted to 0.15 and several aliquots were transferred to fluorimetry cuvettes. Heat shock was carried out at different temperatures in a water bath. Then, the cuvettes were maintained at room temperature and OD and fluorescence intensity were measured at different time points.

As shown in the graphs below, we found a correlation between the temperature at which heat shock was carried out and the level of expression of the fluorescent protein. Higher fluorescence intensity was obtained when higher temperatures (ranging from 40 to 44 ºC) were applied (check the molecular mechanism details). According to our results, it seems that protein expression cannot keep increasing at temperatures higher than 44 ºC, probably due to lethality effects.

We run the enzyme digestion verification and sequence test of plasmid GroE-AsRed2, then test the fluorescence intensity under different heat-induce time. (set gradient between 0 and 30 minutes.)