Truncated lysostaphin coding sequence. Lysostaphin has has a specific lytic action against S.aureus.

Lysostaphin is a zinc metalloenzyme that has a specific lytic action against S.aureus. Lysostaphin has activities of three enzymes namely, endo-β-N-acetyl glucosamidase, N-acteyl-muramyl-L-alanine amidase, glycylglycine endopeptidase. Glycylglycine endopeptidase lyses staphylococcal cells by hydrolyzing glycylglycine bonds in the poly-glycine bridges which form cross links between glycopeptide chains in cell wall peptidoglycan of S.aureus cells. The wild-type lysostaphin gene encodes a preproenzyme, and the conversion of prolysostaphin to mature lysostaphin occurs extracellularly and involves the removal of the hydrophilic tandem repeat portion of the proenzyme. In order to directly produce mature lysostaphin, we truncate the preprolysostaphin and prolysostaphin sequence.

TecCEM 2015 team characterized and validated this biobrick. Its transformation was verified by a plasmid extraction and restriction to release the biobrick from pSB1C3. This was run on an agarose electrophoresis gel (depicted in Figure 1). The migration pattern on the gel concurred with the expected length of the insert. Figure 1. 0.8% agarose gel electrophoresis showing restriction. Lanes 3, 5, and 7 were loaded with 8 microliters of restriction with 4 microlites of loading buffer, and lanes 2, 4, and 6 with the same volume of negative control reaction. Lane 1 with 10 microlers of 1 Kb Ladder DNA Marker Axygen

The insert was ligated and transformed; biomass was generated, and protein extract was recovered from it. The SDS-PAGE was run using said extract; Figure 2 shows this gel when stained with Comassie solution. The expected molecular weight was the one reported in the iGEM12-HIT-Harbin wiki (28 kDa). This further confirmed the presence of the protein, as documented on the biobrick's Parts Registry Entry. Finally, to experimentally validate its function and further characterize it a bactericidal analysis was carried out. Figure 3 shows the photos taken to the Petri dish, where it can be observed a halos formation around the filter paper soaked in different volumes of the extract containing lysostaphin. It can be noted that greater volumes of extract created greater halos around the filter paper.

Figure 3. Photos taken to the Petri dish with the Antibiogram assay. Two filters were used to improve the image. Halos can be observed in the 3 different volumes.

A numerical analysis of these halos was performed, in order to determine the correlation between protein extract volume (and thereby lysostaphin concentration), and the S. aureus growth inibition. This was done by measuring the length of the halo from the filter paper. An average value was calculated from each volume assay and the results where graphed; furthermore, they underwent a linear regression treatment to determine the correlation factor. These data is shown on Figure 4 thereby proving the functionality of the biobrick and providing insight upon its bactericidal TU-Eindhoven 2018 functionally improved this part in multiple ways. Through codon optimization, expression of the lysostaphin domain has been improved considerably. The other major functional improvement was realized by fusing the truncated lysostaphin to the HlyA secretion domain via a cleavable thrombin linker. In this way, (continuous) secretion via the Type I pathway can be achieved by co-expressing it with the HlyB/D secretion proteins. This avoids the requirement of cell lysis for release of the truncated lysostaphin, improving on the project of iGEM Harbin 2012, as self-destruction of their killer device is no longer necessary. Additionally, this new construct simplifies purification of truncated lysostaphin as running the medium over a nickel affinity column followed by thrombin cleavage results in pure truncated lysostaphin. The part BBa_K2812004 has been characterized extensively and the expression, secretion and selective activity of the truncated lysostaphin against S. aureus is demonstrated successfully. Below, the most interesting results are shown. On the left, it can be seen that droplets of medium, in which E. coli BL21 (DE3) bacteria expressing the BBa_K2812004 part and the HlyB/D secretion proteins have been cultured, has a lytic effect to S. aureus. This indicates the presence of lysostaphin in the medium due to secretion. On the right picture, a co-culture of these same induced E. coli Bl21 (DE3) bacteria with S. aureus can be seen. A clear halo formation around the E. coli colony can be seen, indicating lysis of the S. aureus. Both plates demonstrate the secretion and activity of BBa_K2812004. 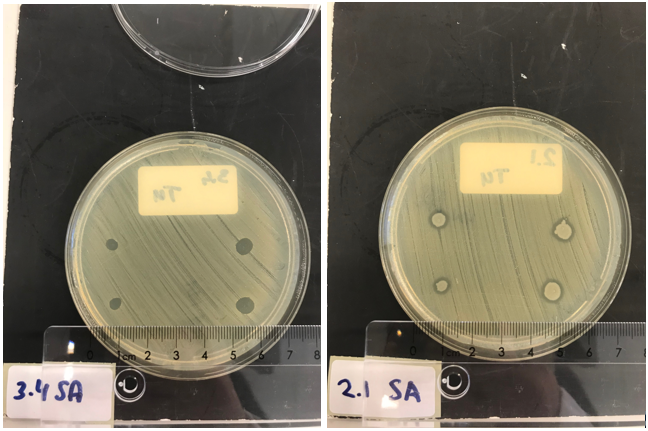 See BBa_K2812004 for more a more in depth characterisation including control experiments.