Ptms is a promoter which proves to be functional in both E. coli and B. subtilis. R.P.U standard is advocated by part registry to represent the efficiency of a constitutive promoter.(Kelly et al., 2009) We intend to characterize promoter Ptms in E. coli. Using E. coli as our initial characterization chassis may prove to be more valuable for most of iGEM participants, because E. coli is frequently used by iGEM participants.

Background Information Link to our Regulation and Control Module

The key reason for using this low efficiency constitutive promoter in our construct is to enable our bacteria to express a low level of antitoxin so that the bacterial cell can only tolerate a certain amount of toxin. As the expression of BMP2 is tightly linked to the toxin, its expression can be regulated accordingly.

Our objective in characterizing this promoter is to test whether Ptms works in E. coli DH10B strain and determine its relative promoter unit (RPU) compared to the standard constitutive promoter (a promoter whose activity is arbitrarily valued at 1.0 by parts.igem.org).

1. Ptms should work in E. coli. This is supported by previous research (Moran et al., 1982). 2. The activity of Ptms should be relatively low.

Instead of using the absolute promoter activity as the final result, our characterization was based on obtaining the in vivo activity of this constitutive promoter. By adopting this method, we are able to eliminate errors caused by different experimental conditions and give a more convincing result. By linking the promoter with GFP (BBa_E0240), the promoter activity was represented by the GFP synthesis rate which can be easily measured. E. coli carrying the right construct was then cultured to log phase. At a time point around the mid-log phase, the GFP intensity and OD595 values were measured to obtain the Relative Promoter Units (RPU)

4. Measuring the GFP intensity and OD595 values every 15 minutes after the above mentioned E. coli strains are cultured to mid-log phase;

Data Processing 1. After E. coli carrying the right construct was grown to mid-log phase, GFP intensity and OD595 were measured every 15 minutes (up to 60min);

3. GFP synthesis rate was then obtained by calculating the slope of the above mentioned curve;

4. Absolute promoter activity of Ptms and I20260 were calculated by dividing the corresponding GFP synthesis rate over the average OD595 value; 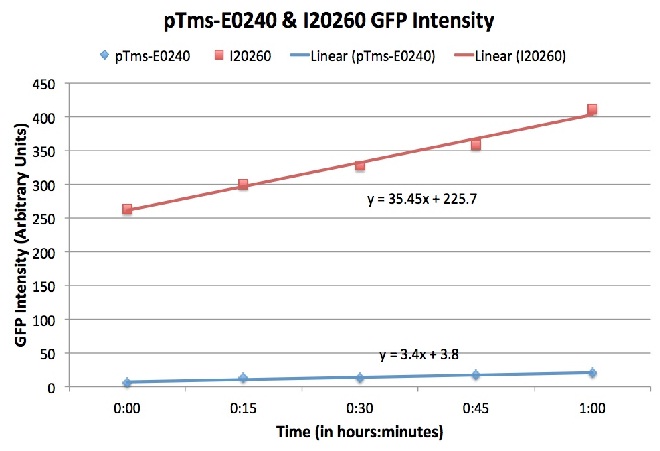 * Above: GFP expression curve for one set of data

2. The RPU of Ptms obtained was 0.046497. This shows that Ptms has a very low promoter efficiency in E.coli DH10B strain. 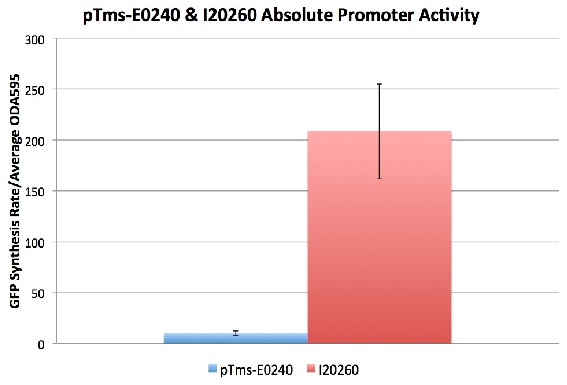 Compared to I20260, it seems that E. coli carrying Ptms-GFP has a rather low GFP expression. This may cause some difficulty in deciding whether Ptms functions in E. coli or not. However, referring to the curve (for GFP Intensity), the GFP expression for Ptms increased gradually with respect to time. This suggests that Ptms functions in E. coli DH10B strain, although with a low efficiency. A possible reason for its low efficiency could be that Ptms was originally from B. subtilis and was suggested to be functional in E. coli. Due to time constraints, we were unable to characterize the promoter in B. subtilis, and we still hope that we can address this in the future.

3. Supplement (for the final medium)