Released HQ 2013
Sample In stock
RFC: 23
Experience: None
3 Uses
Get This Part

Thioesterase (TesA from E. coli) with 8-His Tag

Thioesterase is used in conjunction with Fatty Acyl-CoA Synthetase to greatly increase the concentration of Fatty Acyl-CoA present in the cell, to increase the amount of bioproducts produced. It is used to produce Fatty Alcohols and Wax Esters in the 2011 Utah_State iGEM project.

The experience consists in evaluating the enzymatic activity of the TesA protein in vitro. An acid value (AV) was performed after a fatty acid extraction with hexane on bacterial culture media. Two conditions were used as our pBAD promoter is inducible by arabinose: induced and non induced samples. To do that a transformation of E. coli thermocompetent JM109 have been done. 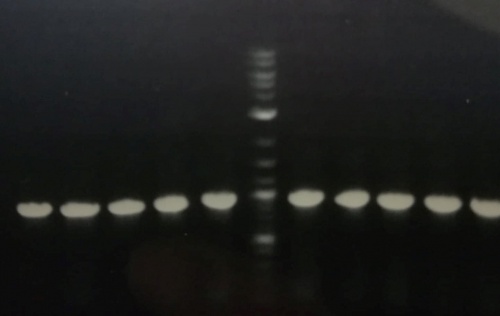 Colonie PCR after transformation of E. coli thermocompetent with TesA K654058.
The PCR was performed with plasmid primer. The migration was performed at 100 volts for 30 minutes in TAE 1X. The marker used during the migration is the NEB 1 kb Plus Ladder.

After transformation, minipreparation is realized and enzymatic digestion is performed. The ligation between TesA, pBAD and pSB1A3 is then realized. 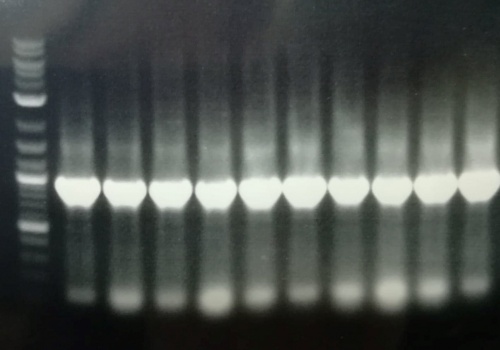 
The migration was performed at 100 volts for 30 minutes in TAE 1X. The marker used during the migration is the NEB 1 kb Plus Ladder.

The construction pSB1C3 / tesA seems to have been integrated around 1000 bp. However, a weak band also seems to be present around 1300 bp which corresponds to the size expected for the pBAD / tesA / pSB1A3 construction. The construction was then induced and an acidic value is performed. 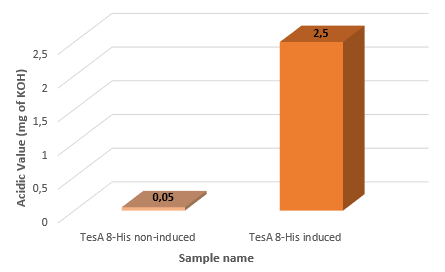 
Transformed bacteria with TesA gene and pBAD promoter were cultured until DO600nm = 0.5 then induced or not with 0.2% arabinose. Fatty acids were then extracted from our bacterial culture media with hexane and acidic value was then measured.

The volume of potassium hydroxide (KOH) in milliliters to neutralize the free acidity in our samples was measured thanks to an indicator dye: the phenolphthalein. The acid value, which represent here the quantity of KOH needed to neutralize the free fatty acids existent in the sample, was then calculated. It exhibited a difference between the induced sample and the non-one. The non-induced sample presented a smaller AV (0,05 mg) compared with the induced one (2,5 mg) which confirms that the induction leaded to an active TesA which increased the production of free fatty acids in the media.