Sequence of Cl repressor without modification derived from pGW7 is described on this part’s sequence page. Sequence of plasmid in plate sent from HQ is as written on main page.

We managed to perform a last-minute, "blind" -ie not knowing if the sequence of the insert was correct-, and preliminary OD-measurement testing of the part in conjuction with (BBa_K608352), as part of our temperature sensitive phage lysis cassette.

The OD values of the measurement are shown in the chart (please do bear in mind that this was a measurement done under deadline-stress, without the possibility to plan and perform something more concrete before the Wiki-Freeze) 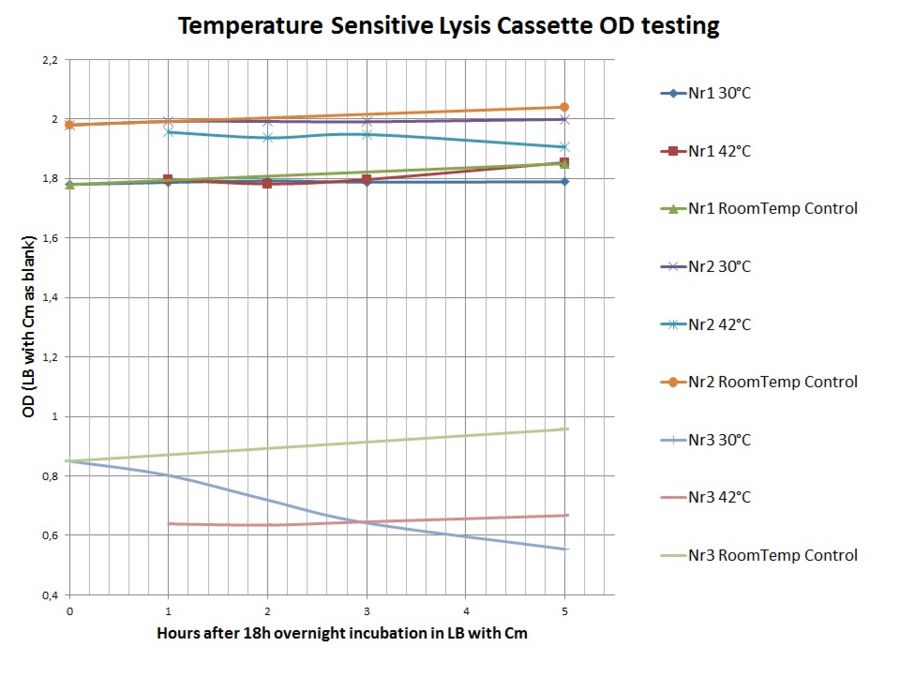 Therefore (BBa_K608351) seems to be functioning, though not tightly. More tests are planned if time allows (ie wiki-unfreeze ;) ) One sure thing is that the correct testing would be done with GFP or RFP instead of (BBa_K608352), and also at different temperatures (probably a 25°C to 42°C gradient).

We tested this part together with an mCherry reporter ([1]) flanked by either of the four combinations of two RBSs ([2],[3]) and two terminators ([4],[5]). The CI protein and the mCherry were put on the same plasmid with the CI set to inhibit the trancription of mCherry. We wanted to test the comparative mCherry expression at the standard E.Coli growth temperature of 37 °C and the CI denaturation temperature of 42 °C mentioned in the description of this part.

E. Coli DH5α cells were transformed with the constructs above. Transformants were inoculated overnight in LB medium with kanamycin, at 37 °C and 255rpm. The 5 cultures were placed in a water bath at 37 °C. The water bath was gradually heated to 42 °C to avoid heat shocking the cells. Time courses of the fluorescence (abs: 580nm, em: 615nm) and OD of the cells were recorded (see the figure below). 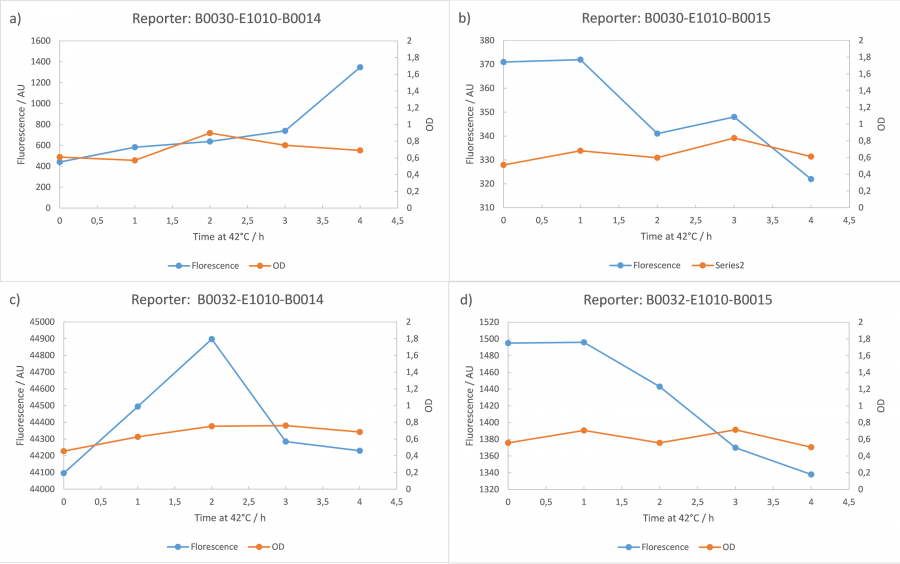 The four combinations of RBS and terminator around an mCherry reporter coupled to a CI repressor (this part). In a) and b) the RBS was clearly not effective, with the fluorescence being close to that of cells lacking an mCherry. The heat treatment did not have any obvious influence on the fluorescence of the cells. The RBS in c) and d) had relatively high fluorescence values, which changed by an order of magnitude with the terminator chosen. However, the heat treatment did not have any obvious positive influence in these cases either. In d) the influence was negative in fact.

Therefore we concluded that this part is not a good choice for temperature transitions between 37 and 42 °C. This agrees with the experience gained on this part by other groups.

These results show that the CI repressor implemented in this part is effective at repressing gene expression when grown at 30 °C.