This part encodes FabH2. The 2011 University of Washington iGEM Team has produced even chain length alkanes using this part and the Petrobrick. In addition, expression of this part and the Petrobrick should theoretically produce branched chain alkanes, but we have not been able to demonstrate this effect, possibly due to the absence of the appropriate substrates in E. coli

FabH2 is a FabH homolog fromBacillus subtilis. The FabH family of proteins initiates fatty acid elongation by converting an Acyl-CoA into an Acyl-ACP, with is extended by 2 carbon units to form longer chain length fatty acids. Normally, FabH proteins use a simple 2-carbon acetyl-CoA to start fatty acid biosynthesis, resulting in even chain length, linear fatty acids. However, FabH2 can also use Isobutyryl-CoA and Isovaleryl-CoA, (products from Valine, Leucine, and Isoleucine degradation), resulting in 2-methyl branched fatty acid production[1]. In addition, FabH2 has been hypothesized to start fatty acid elongation with a straight 3-carbon unit (propionyl-CoA), yielding odd chain length fatty acids, which could be converted into even chain length alkanes by the Petrobrick. Expression of FabH2 on the same high copy number constitutive plasmid as the PetroBrick( as in Part BBa_K590030) results in slow cell growth, and low alkane yield( under 10 mg/L vs. approximately 170 mg/L in the Petrobrick). 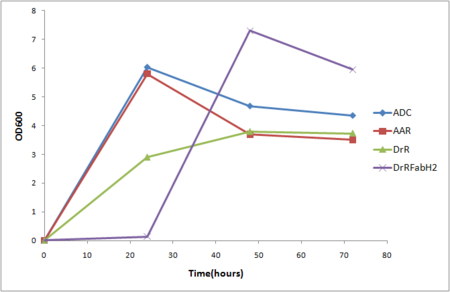 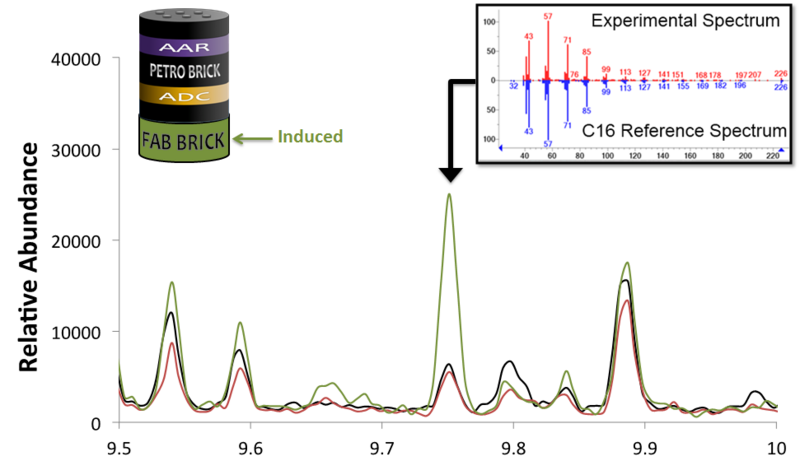 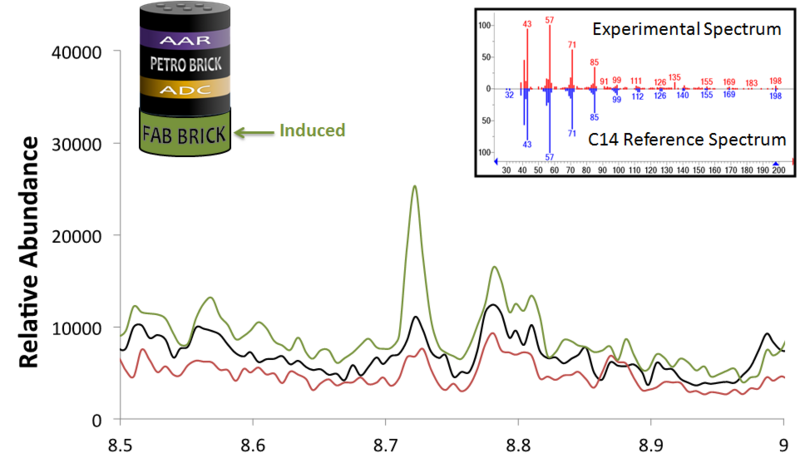 In E. coli, the eFabH enzyme active site has a “catalytic triad” which is an arrangement of 3 amino acids-Cys112, His244 and Asn274. Its function first involves the transfer of the acetyl-CoA to cys112 on the KAS III protein to form an acyl-KAS III intermediate via a process called trans-thioesterification. Then, decarboxylation of Malonyl-CoA forms an enolate anion that performs a nucleophilic attack on the acyl-KAS III carbonyl carbon. This forms the acetoacetyl-ACP product. While E. coli has a very high specificity for acetyl-CoA and is unable to use branched chain substrates, many bacteria are able to use different types of starting substrates to form fatty acids (Nofiani-Mahmoud, 2019). Most bacteria, including E. coli, have only one FabH gene. However some, like B. subtilis have two. B. subtilis has 2 orfs that correspond with the FabH gene in E. coli, bFabH1 and bFabH2 . The purpose of the presence of two FabH genes has not yet been elucidated. While some bacteria can initiate the FAS cycle using straight and branched substrates and are not restricted to just straight chain unsaturated fatty acids, eFabH like eFabH is. eFabH is incapable of using branched chain substrates as an initial substrate and is highly specific towards the simple 2-carbon Acetyl-CoA.

Therefore, it is thought that the composition of fatty acids produced by broadly specific enzymes, like bFabH2, is determined largely by the initial substrate, and not by the specificity of the enzyme. For example, if the initial substrate is branched, then a high amount of branched fatty acids will be produced (Choi, 2000). Acetyl-CoA, propionyl-CoA, and Butyryl-CoA are substrates that generally lead to the production of short chain fatty acids. Isopropyl-CoA, isobutyryl-CoA and methylbutyryl-CoA are substrates that lead to the production of branched chain fatty acids (Nofiani-Mahmoud, 2019).

Research showed that deletion of the FabH gene in E. coli heterologously expressing pfa genes from M. marina had three times the docosahexaenoic acid (a PUFA) production than wild type E. coli. Compared to the control strain which produced 2.8 +/- 0.4 mg DHA per liter of culture, the FabH mutant produced 11.2 +/- 1.9 mg DHA per liter of culture. This happened because the foreign PUFA synthase did not have to compete with the natural fatty acid synthesis pathway because FabH was disbaled . Additionally, the FabH mutant also has a decreased C16:0 production, 16.7% compared to 36.5% in the control strain. It also had an increased long chain fatty acid production like C18:1n7 production which went from 23.5% in the control strain to 45.2% in the mutant strain. The Folch method was used to isolate the fatty acids from the sample and gas chromatography was used to quantify each fatty acid. The mutant grew slower than the control and had a higher doubling time, 7.2 hours compared to 5.2 hours of the control. All cultures were grown at 15°C (Robles, 2018). 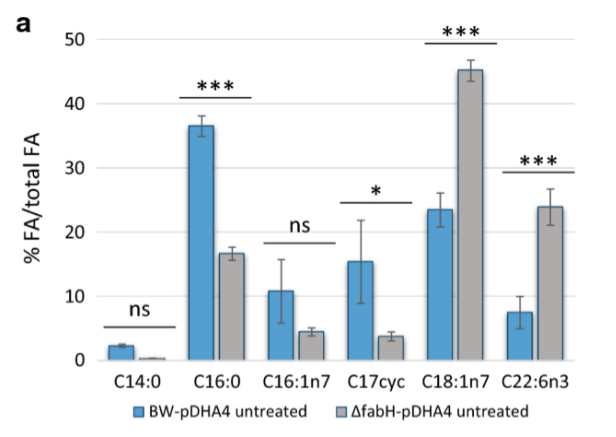 (^Robles, 2018) The graph highlights the three fold increase in DHA (C22:6n3) production in the FabH mutant compared to the wild type strain. The graph is showing %DHA produced relative to total fatty acids. Overexpressing FabH reduced fatty acid synthesis and increased Malonyl-CoA levels in the cell. The cellular Malonyl-CoA concentration increased by 49%and Went from 2.45 ± 0.02 nmol/mgDCW in the control to 3.78 ± 0.03 nmol/mgDCW in the FabH overexpressing strain. The total fatty acid production decreased in the FabH overexpressing strain. It went from 27.25 ± 0.08mg/L/OD in the control to 22.53 ± 0.02mg/L/OD in the FabH overexpressing strain (Cao, 2016). Additionally, because the FabH gene of E. coli is unable to use and produce branched chain fatty acids, heterologous expression of FabH genes from organisms that can use branched chain fatty acid substrates in E. coli led to the production of branched chain 17-carbon fatty acids. This emphasizes the importance of the substrate specificity of FabH in determining the characteristics of the end product (Choi, 2000).