Lipopolysaccharide (LPS), or endotoxin, is the major mediator of septic shock, a serious complication of Gram-negative bacterial infections in humans. Molecules that bind LPS and neutralize its biological effects or enhance its clearance could have important clinical applications. Limulus anti-LPS factor (LALF) binds LPS tightly, and, in animal models, reduces mortality when administered before or after LPS challenge or bacterial infection. The wedge- shaped molecule has a striking charge distribution and amphipathicity that suggest how it can insert into membranes. The binding site for LPS probably involves an extended amphipathic loop, and it has been proposed that two mammalian LPS-binding proteins will have a similar loop. The amphipathic loop structure may be used in the design of molecules with therapeutic properties against septic shock.

We used this Biobrick in our device K541515. For further experiments, please look `Experience` 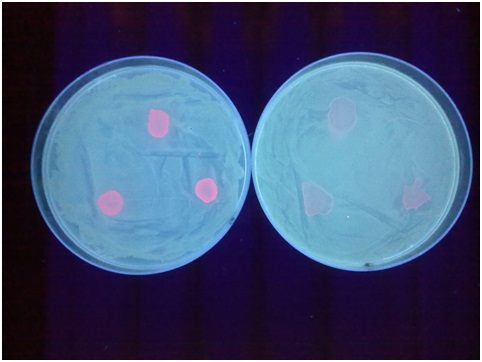 Plates B2 and B1 (Respectively)

Plate B1); We spreaded B. Subtilis with LALF over a normal lb medium. We put E. Coli as a single point while the Bacillus spread is fresh. We aimed to see if B. Subtilis could kill E. Coli without forming a biofilm.

Plate B2); We prepared this plate as a control plate of Plate C. For this we prepared the same contrivance with only B Subtilis that doesn’t produce LALF protein or doesn’t have antibiotic resistance in order to be sure that if the EColi of the plate B1 does not grow the reason for this is LALF protein.