Released HQ 2013
Sample In stock
Experience: None
5 Uses
1 Twin
Get This Part

SmtA is a metallothionein that can bind to heavy metal ions such as Cd(II). This SmtA is cloned from Synechococcus sp. PCC7942, a cyanobacterial strain. SmtA is a type II metallothionein with a reduced cys content.It was reported that marine cyanobacterium that does not originally harbor a homologous gene, when genetically engineered to express SmtA, could tolerate medium containing Cd(II), Zn(II) and Cu(II) (Sode et al., 1998). The data above, taken from a paper (Sode et al., 1988), shows that a cyanobacterial strain was able to tolerate medium of high Cd(II) concentration when it harbored the smtA gene.

For our iGEM project this year, we have successfully observed that SmtA, expressed under a constitutive promoter (J23109) work very well. We plotted a graph of growth rate by looking at the OD595 every 1 hour, and compared the growth of wild type E. coli and SmtA expressing E. coli. As a result, we found that E. coli expressing SmtA grow better than the WT E. coli at a high Cd(II) concentration.

Moreover, one of the two Cys coordination zinc ions in SmtA is easy to exchange with the exogenous metal (cadmium)(Fig.1), and the other is inert and hard to replace. 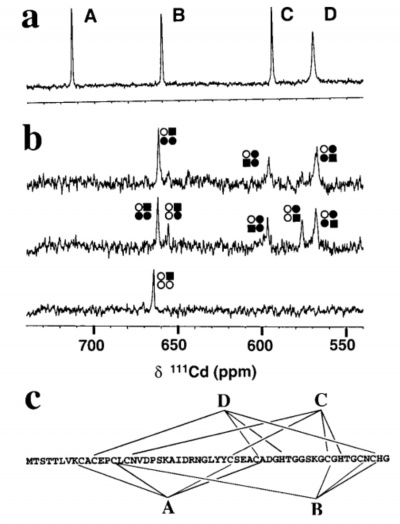 In addition, SCAU-China also optimized the codon according to yeast codon bias. The experimental results are shown in BBa_K4014012

We have improved this part, more details please see http://parts.igem.org/Part:BBa_K4014012