This device is an AHL induced transcriptional unit to express phiX174 lysis protein together with a TU for the constitutive expression of LuxI. It was assembled with a one-pot Level 2 Golden Gate reaction using BsmBI type IIS endonuclease.

This device is composed of the following standardized composite parts:

The development of this part was performed following the steps of the Design-Build-Test-Learn (DBTL) cycle of synthetic biology. Here, we describe the different steps and the results obtained.

This part is designed for delivering and releasing dsRNA molecules of the gene of interest in the context of controlled oscillations in the size of the bacterial population. However, we replaced the gene of interest with a reporter to test the effectiveness of part and to use it as a proxy to estimate the amount of lysis protein being expressed. To this end, LuxR-AHL transcription factor activates simultaneously the expression of GFP and the lysis protein PhiX174E.

Before building our device in the lab, we made a mathematical ODE model to check this design was able to produce the desired oscillations. Although the ODE model only considers N=20 cells, we see qualitatively confirm that our device is able to develop the desired behaviour, i.e. the population oscillations based on quorum sensing.

As the ODE model of Module 2-Delivery and Release, this new model has 7 states. Particularly N is the number cells growing in the culture, and GFP is the system output. Ae is the number of molecules in the culture medium, and the remaining species are intracellular ones. From the computational simulation performed with our model (see the details in our modeling page), as expected, we can confirm that the designed gene circuit shows an oscillatory behaviour since cells die only when the lysis protein is activated. Therefore, this ODE model used as a proxy of Module 2-Delivery and Release fulfills the requirements for delivering and releasing dsRNA molecules due to cell lysis. In the lab, we needed to build our device. For this we planned a golden gate assembly with 3 levels using the Golden Braid assembly method from Valencia_UPV. First, we combined together two composite parts that were already in the Part Registry (BBa_K2656122 a Level 1 transcriptional unit expresing GFP under the control of the pux promoter and BBa_K2656114 a Level 1 transcriptional unit constitutively expressing luxR gene) to create part BBa_K3893028 . 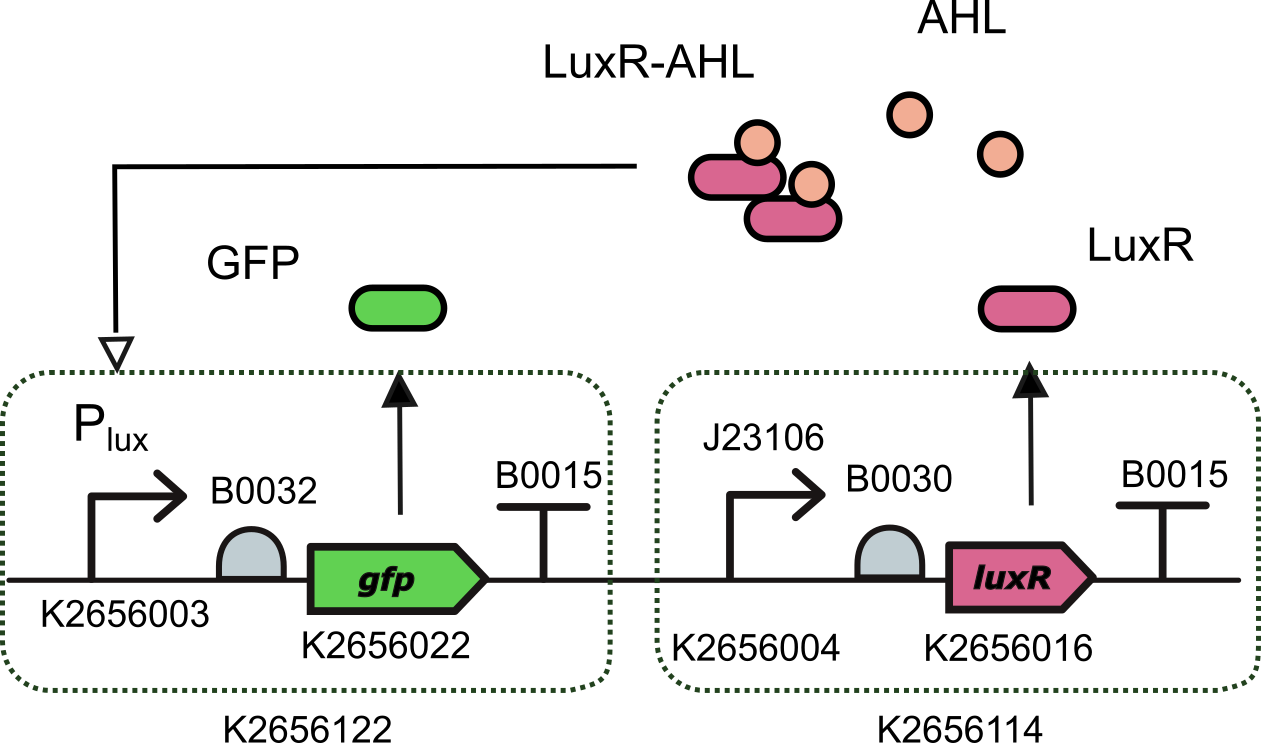 We designed a temporal experiment to assess and quantify (if possible) cell lysate. We collected absorbance and fluorescence data from the gene circuit in vivo. One of the assays is shown in the Figure below.
Figures A and B depict how cells death when the lysis protein is activated by the lux promoter K2656003. The number of cells was calibrated using standardized particle units from the Engineering Committee (Measurement Committee) and the iGEM Interlab study 2018-2019.

The total GFP fluorescence expressed by the population and a single-cell is shown in Figures C and D, respectively. At the beginning of the experiment, the number of cells producing GFP is very low (OD 600=3.05e-6). But after lysis, GFP molecules are released to the medium and some cells are still producing GFP. We used MEFL/Particle (molecules of equivalent fluorescein per particle) as a standardized unit to quantify GFP expression per cell. In parallel to this DBTL cycle to develop our Module 2, we performed a smaller inned DBTL cycle including design, assembly (build), measurements (test), and model and characterization of the part (learn) using part BBa_K3893028 and contributing to characterize the pLux promoter (Part BBa_K2656003 which is the Golden Braid compatible, together with its Biobrick starndard sister part BBa_R0062) in the context of the transcriptional unit built in part BBa_K2656122. 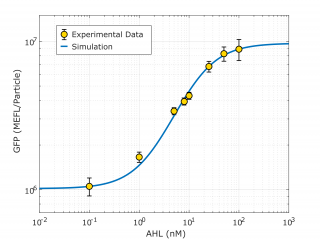 With these parameters from the experimental data and model of pLux promoter, we went back to our model and learned, by including the new values and performing new computational simulations.

Here, we show the results of the new computational simulations. And we can see that the information we learned and plugged back into the initial model makes our model better. By comparing the in silico vs. in vivo results, we see that our model captures the temporal dynamics of the oscillator, and also recapitulates with the Total dsRNA being similar to the Total GFP in the experimental data.

An interesting point is that we did not fit the oscillator model with data from the experiment from part BBa_K3893030, but we incorporated the characterization made of one of the components of the system, and still, we got good agreement between the model of Module 2 and its corresponding experimental data. This, speaks itself about the power of modeling and the DBTL cycle in Synthetic Biology. Finally, our newly adjusted ODE model can be used to redesign our device, by predicting outcomes for different conditions of components, and also it can be used in an optimization process to improve other aspects of our devices we need to improve. Now we have a starting point for optimization that can be done in silico, instead of building a new set of circuits to see which one performs better than the original.