This part contains the promoter BBa_J23119, RBS* BBa_K2924009, the coding region of Acyl-[acyl-carrier-protein] hydrolase from Cuphea hookeriana BBa_K2924001 and the double terminator BBa_B0015.

Fatty acids are long aliphatic chained carboxylic acids, which can be saturated or unsaturated. They have mostly an even number of carbon atoms from 4 to 28. Octanoic acid (Fig. 1) is a saturated fatty acid with 8 carbon atoms, which is also called caprylic acid. It is a colorless 1/light yellow liquid and has a mild to fruity-acid odor 2. It has a molecular mass of 144,21 g/mol. 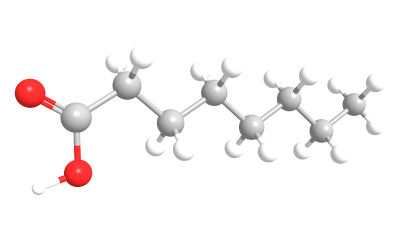 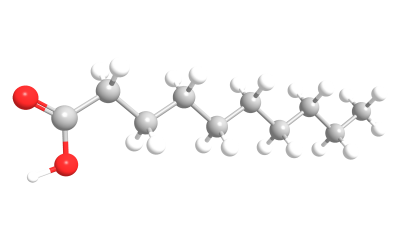 Decanoic acid (Fig. 2) is a saturated fatty acid with 10 carbon atoms, which is also called capric acid. Capric acid is a white crystalline substance, with a rancid odor 3. It has a molecular weight of 172.27 g/mol.

Octanoic acid and decanoic acid are both naturally found in milk of mammalians.

Fatty acids are synthesized and elongated by fatty acid synthases, which is a complex containing multiple enzymes. The determination of its length is controlled by thioesterases, a subgroup of hydrolases. They hydrolyze acetyl-CoA esters or acyl carrier protein esters to the corresponding free fatty acid and the Coenzyme A or the acyl carrier protein.

The acyl [ acyl-carrier-protein] thioesterase of Cuphea hookeriana (FatB2) uses 8:0- and 10:0-ACP substrates for hydrolyzing the free fatty acids caprylic acid and capric acid4. In planta two isoform of thioesterases, FatA and FatB, are present. They differ in their specificity and activity for different acp-substrates, which is determined by the N-terminus of the isoforms 5. FatB2 stem from the seed of this plant, which contains a high percentage of short and medium chain fatty acids, especially caprylic, capric, lauric, and myristic acid 6.

Usage of caprylic and capric acid

Caprylic acid is added directly to human food affirmed as generally recognized as safe (GRAS) 7,8. The substance is used as a flavoring agent and adjuvant and occurs normally in various foods, like baked goods, cheeses, fats and oils, frozen dairy desserts, gelatins and puddings, soft candy and snack foods. It is found in milk of various mammals and is a minor component of coconut oil and palm kernel oil 9. Therefore, it has a low toxicity ( oral LD50 for rat: 10.08 g/kg)7.

Capric acid is not only important for milk of mammals, coconut and palm kernel oil, but also in the manufacture for artificial fruit flavors and perfumes and also industrially dyes, plastics, food additives and pharmaceuticals 10.

The part was cloned via Gibson Cloning into the pSHDY plasmid. The pSHDY plasmid is an RSF1010-based, low-copy self-replicating vector derived from pVZ321 and has a broad host range, which can ensure the conjugation from Escherichia coli to cyanobacteria and other microorganisms. 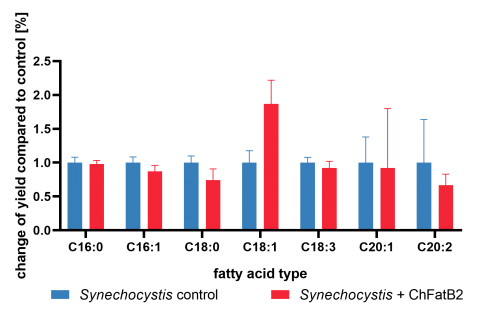 For the fatty acid analysis in Synechocystis sp., the conjugants and the wild type as control were grown under the same grow conditions. 4 optical density units of cells, usually, an equivalent of 4 ml cells at OD600 = 1, were isolated and used for extraction and derivatization of fatty acids for comparison. The extract was used for gas chromatography-mass spectrometry (GC-MS) to identify different fatty acids compositions in Synechocystis (Fig. 3).

Unfortunately, we did not detect any expected additional free fatty acids in the isolated cells, which can have several reasons.

Nevertheless, surprisingly a higher yield of C18:1 fatty acid could be detected, suggesting, that the increase may be due to the heterologous expression of ChFatB2.

We were able to demonstrate that the heterologous expression of a thioesterases changes the fatty acid profile of Synechocystis. Therefore by optimising the system we should be able to tailormade produce all fatty acids from bovine milk in this CO2 neutral organism.

[5]: Salas, Joaquı́n J., and John B. Ohlrogge. "Characterization of substrate specificity of plant FatA and FatB acyl-ACP thioesterases." Archives of Biochemistry and Biophysics 403.1 (2002): 25-34.