Protein E is a lysis protein originally encoded by the bacteriophage Phi X 147 and destabilizes the bacterial cell membrane resulting in cell death.

CATE deploys protein E to release the cytotoxic agent within tumor cells upon heating the desired are to 45 °C with focused ultrasound. The exact mechanism of action of protein E has long been controversial and different models were proposed to explain its lytic function. It has been suggested that protein E activates a component of the E. coli autolytic system, that it inhibits cell wall synthesis in a manner similar to penicillin or that it oligomerizes into transmembrane tunnels. Both mechanisms would result in the release of cytoplasmic content and thus ultimately cell death.123

However, it is now generally accepted that the most probable cellular target of protein E is an enzyme called translocase I encoded by the mraY gene. Translocase I is required for cell wall biosynthesis and its inhibition leads to cell lysis. The "transmembrane tunnel" model has largely been discarded and the tunnels are now attributed to faulty cell wall synthesis.1

ARIA UPF Barcelon iGEM Team Composite part BBa_K3791025 is a construct intended to permit both the transcription and the repression of the gene that encodes for protein E. Such protein has an autolytic function: its aim is to lysate the host bacteria by a not exactly determined mechanism of action. This event results in the release of the cytoplasmic content and the consequent cell death.

The full construct is formed by a promoter, a ribosome binding site, the protein E gene and finally a terminator. The first component is pBAD-araC promoter (BBa_I0500), which is composed of several functional elements, being the pBAD promoter and pC promoter. These have a functional relationship susceptible to the nutrients found in the medium culture [4].

If there’s absence of glucose but plenty of L-arabinose, the latter will bind to the AraC protein promoting its dimerization. The complex will bind to the l1 and l2 sites of the operator site found between pBAD and pC, inducing binding of CAP (cyclic AMP receptor protein) and facilitating transcription in both promoters. This creates a positive loop for AraC transcription, as well as for the gene found to be regulated by pBAD [5]. Otherwise, if the nutrient found in the medium is glucose, AraC will dimerize without arabinose, binding to the O2 and I2 regions of the operon and inducing looping of DNA [6]. Also, plasmatic cAMP will decrease preventing CAP from binding the regulating region, thus transcription will be down-regulated in a negative loop.

The other pieces of this part are, apart from the aforementioned protein E, the following efficient RBS and the E. coli his operon terminator: BBa_K2306014 and BBa_B0053.

Figure 1 Description: The construct structure is represented in a simple diagram. The AraC pBAD functional element is placed on the 5’ end, followed by the RBS, the gene codifying for Protein E, and His operon terminator on the 3’ end. The AraC codifying region is placed upstream of pBAD, but it’s transcribed in the opposite direction.

Design Notes
The assembling of this construct was carried out considering the logic order of transcriptional regulatory elements. That is: the promoter regulatory sequences on the 5’ end, followed by the RBS (ribosome binding site), the gene of interest, and the His operon terminator on the 3’ end.

Usage and Biology
This part is used inside NZY5α competent cells, where we transform our cloned plasmid containing Protein E controlled by the pBAD promoter. For the cloning, we used Gibson Assembly. This method takes advantage of adjacent DNA fragments that have complementary ends, to fuse two different parts together [7]. More details about the building process are available on our Biosensor library building page.

One of the simplest and cheapest ways to visually and quantitatively verify that cells have been lysed is by Bradford's assay. It is a colorimetric assay based on a dye called Coomassie Brilliant Blue G-250, that can bind protein complexes. In an acidic environment and after the addition of the proteins, there is a shift from the reddish-brown color of the dye to its bluish form. This change can be observed at naked eye or by measuring the absorbance at 595nm with a Spectrophotometer. Finally, to quantify the amount of protein in the compound, the measurements can be extrapolated to a BSA standard curve (blank) [8].

Figure 2 Description: Representation of the Bradford Assay. Scheme of colorimetric change from brown to blue after the addition of a protein complex, quantitative measurement and extrapolation of absorbance to a BSA standard curve.

Characterization
For this section, preliminary results which give important information were accomplished. We also realized some crucial issues for our further work in the future. Regarding the autolysis protein, we were able to perform the cloning of the fragments correctly (Figure 3). As can be seen, both the Digestion and PCR of the purified parts went well, and we assume that there was no problem in performing the Gibson Assembly. 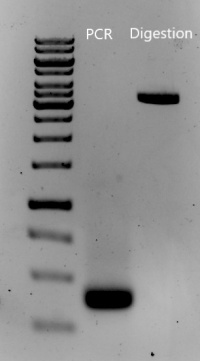 However, we did not consider an important aspect. After performing a transformation on NZY5α competent cells, we cultured them on an Agar plate without D-Glucose. The result was that the next day we had not obtained any colony (Figure 4). 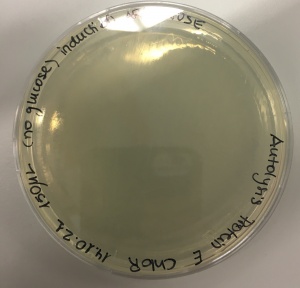 Conclusion
We consider that the lack of colonies is due to the leakiness of the expression of the autolysis protein and that its minimal expression is already able to lyse the cells. Therefore, we know that in the future we will have to grow the cells in a medium rich in D-glucose to completely inhibit the PBAD promoter [9]. Further experiments remain to be performed, but we have proved one important feature about Protein E leakiness.