The DSBox (Downstream Box) increases the translation of the mRNA at low temperature, probably by binding to the 30s subunit via ribosomal protein S1 (Studer et al 2006, Duval et al, 2013, Qu et al 2012). The DSBox is unusual among 5' regulatory sequence motifs in that it appears after the start codon and is translated into the protein product at the N-terminus. The double terminator provides robust termination. AmilCP is a coral chromoprotein which displays a strong blue color. With this part we can evaluate the impact of the DSBox on the coding sequence of the protein and see if amilCP expression is modified as well as its properties (colors, time of folding).

Source of this part

This part is the same as BBa_K2282005 with the slight difference that we inserted the DSBox sequence (Mitta et al, 1997) from the E.coli genome to the amilCP coding sequence. The DSBox size as defined in Mitta et al, 1997 is 14bp. In order to avoid introducing a frameshift error we added an adenine nucleotide at the 3’ end to increase the size from 14bp to 15bp by completing the 3’ codon. The sequences of the DSBox and other cold-induced translational regulatory elements are very similar to the parts of the iGEM10_Mexico-UNAM-CINVESTAV that can be found here : http://partsregistry.org/Part:BBa_K328003

Adding 15 nucleotides to a protein coding sequence raised some concerns about its effect on protein stability and activity. We addressed this problem with molecular modelling to optimize the placement of the DS Box (see our wiki) and confirmed the results in the lab. 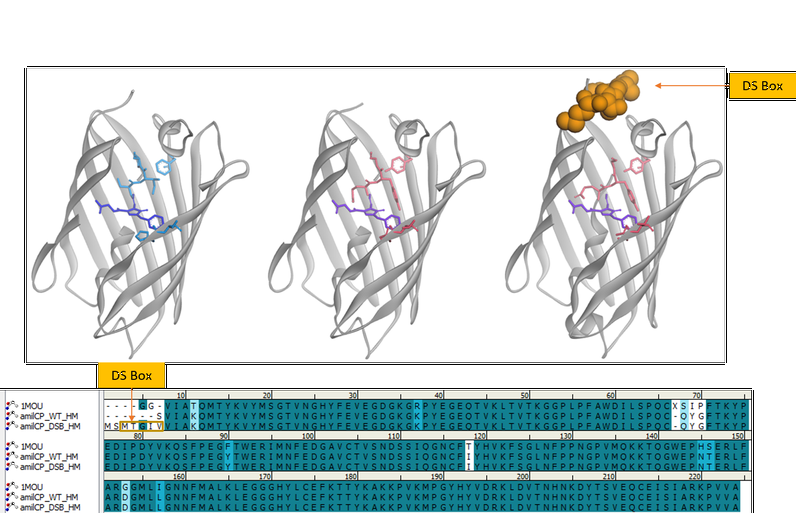 Objective: Verify that the DS box inclusion inside the amilCP sequence does not impact the protein expression.

After having constructed our recombinant plasmid composed of the part BBa_K2282006 ligated into the pSB1C3 backbone, we compared the visual aspect and the expression rate of amilCP in comparison with BBA_K2282005.

Incubated for either 18h or 42h into liquid cultures, two bacteria samples were collected and pelleted by a 1 min centrifugation at 13000rpm. The resulting pellets were observed and the blue coloration visually compared at 37°C and 15°C. 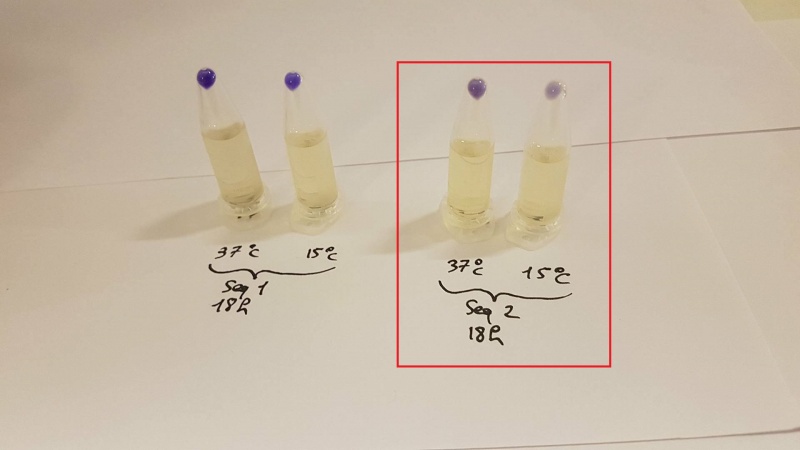 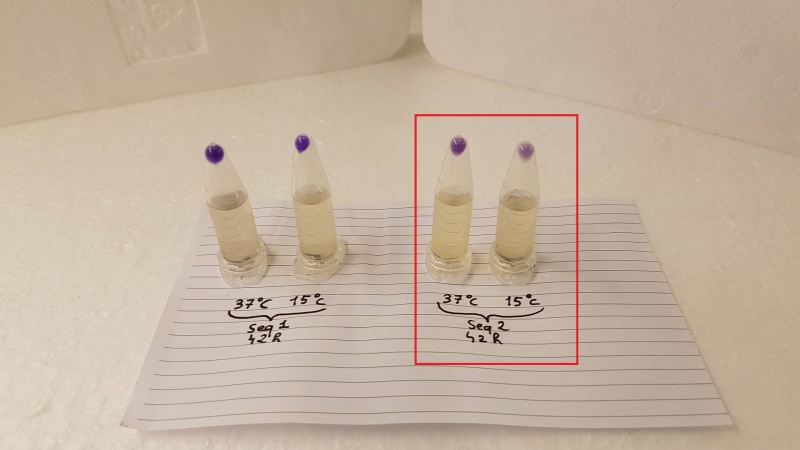 The results tend to show a lighter blue color of the amilCP with the DS box compared to the native protein, irrespective of the incubation temperature or duration. This first suggests that the DS box alone does not have any enhancing activity on the cold protein expression. Moreover, this color difference was not observable on petri dishes and bacterial suspensions. Impact of the DS box on amilCP absorbance properties

After an overnight bacterial culture at 37°C, the protein content was extracted and the absorbance spectrum of the obtained solution was measured. We corrected the values obtained with a blank consisting of wild-type culture extracted proteins. The results are presented in the following graphs:

The absorption spectrum of the native AmilCP from part BBa_K2282005: 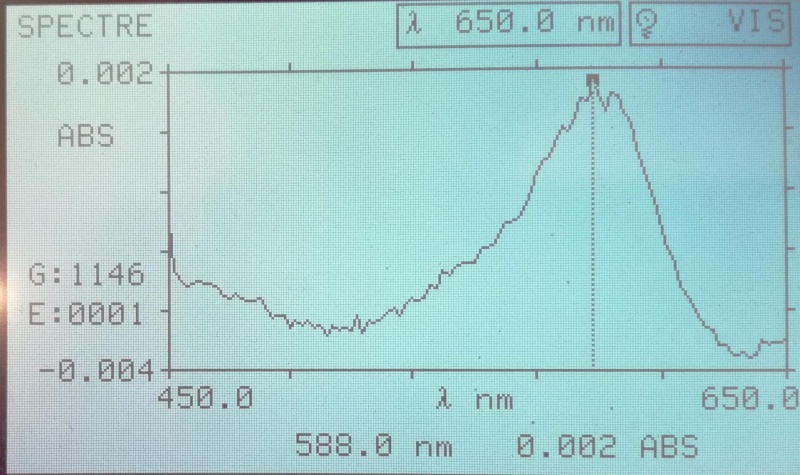 The absorption spectrum of the DS box-added AmilCP from part BBa_K2282006: 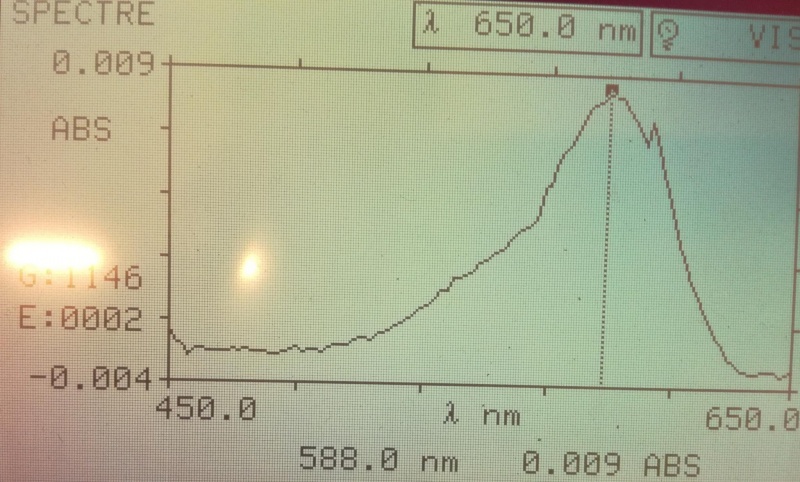 The native amilCP as well as the amilCP added with the DS box both give the same absorbance peak at 588nm. This is consistent with the existing data (http://parts.igem.org/Part:BBa_K592009), and shows that the DS box does not alter the chromoprotein absorption profile, and therefore its color properties. This is in accordance with the DS box location outside the chromophore domain. We therefore made the hypothesis that the slight color difference observed between pellets might be due to a lower protein expression. This was verified through a kinetics measure of OD588nm, representative of the amilCP expression, at different temperatures.

Impact of the DS box on amilCP expression rate

Both bacterial batches express functional amilCP as the signal at OD588nm shows. This confirm that the presence of the DS box does not impact the protein properties. The same protein expression pattern is observable at both temperatures, with an overall lower expression at 18°C. This predictable result confirms the absence of enhancing properties on cold protein expression from the DS box alone.

This proves that this lower expression rate possibly induced by the presence of the DS box is not problematic when combined with the CspA promoter and 5’UTR sequence, allowing its activation.

Finally, we attempted to sequence this part but did not obtain any satisfying result.

- Masanori Mitta et al, Deletion analysis of cspA of Escherichia coli requirement of the AT-rich UP element for cspA transcription and the downstream box in the coding region for its cold shock induction, Molecular Microbiology (1997) 26(2), 321–335