To attempt to improve the stability of the original blue chromoprotein, a digestion was performed on the BBa_K608002 vector and the codon-optimized blue chromoprotein, which was ordered as a gBlock from the Integrated DNA Technologies (IDT) website. Upon digestion of these parts and conducting gel extraction, a ligation reaction was used to join our codon-optimized blue chromoprotein part with the BBa_K608002 vector. Following the purification of the ligation, E. coli transformation was done via electroporation which yielded one phenotypically blue colony, shown below in Figure 1. This colony was then inoculated into liquid media to make an overnight culture, shown in Figure 2, which maintained a blue phenotype. 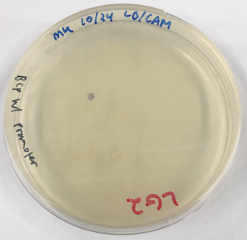