The part is to act as a backbone for the T7+ibPB RNA Thermometer+pelB+6xHis system. The MCS(Multiple Cloning Site) as the ligation region for the parts to be integrated into the system. The part that is added to the backbone will be translated in the presence of higher temperatures. The pelB signal peptide is present for the produced protein to be carried out of the cell. The 6xHis is for protein analysis.

It has been understood that heat-shock mechanisms are required in almost all organisms and is present in the most primitive bacteria species to the most complex organisms.[2] This very rudimentary mechanism therefore necessitates to be handled by the most common structures found in all that is living, RNA. The heat sensitive mechanisms in living organisms are conducted by

There are common features of RNA Thermometers. The main feature of all RNA thermometers is that they function through conformational shifts in structure. These shifts cause conformational changes to expose the Shine-Dalgarno sequence, which acts as a binding site to allow translation.[3] For translation to occur, the ribosome has to the aforementioned SD sequence. The structural differences are caused by the transcription regions, but the SD sequence is common. Aside from that, temperature is the factor responsible for changes in all RNA thermometers, but there are cold-shock RNA Thermometers as well as heat-shock.[4]

The Rna thermometer that will be utilized in our project is the ibpb RNA thermometer. Taken from the strains of the x species of the x group of organisms, the ibpb thermometer is a standard cis-acting heat-shock regulated rna thermometer. The heat shock process is stimulated by the medium of the attached protein. This heat shock response is effectively stimulated at 37 °C and beyond, however the RNA thermometer starts to function at 32 °C.[5] 32 °C presents enough energy for some of the strands in the medium to start translation, while mostly, translation occurs at low levels. The unbinding of the dna sequence reaches its maximum at 37 °C, but the rate of the reaction and translation increases as the temperature further increases, as the number of ribosomes that can collusively attach to the SD sequence increase with temperature. This means that the activity of the strain increases with temperature, with the temperature of denaturation being the limiting factor.

The composite system was ligated to the cloning vector psB1C3, to be transformated and then verified with Colony PCR. The verified ligation was then moved on to the digestion step to be cut with the EcoR1 and Pst1 restriction enzymes. The gel run of the cut parts were portrayed down below. The part was tagged as G-Block 6 and sample 6-2 yielded accurate results. 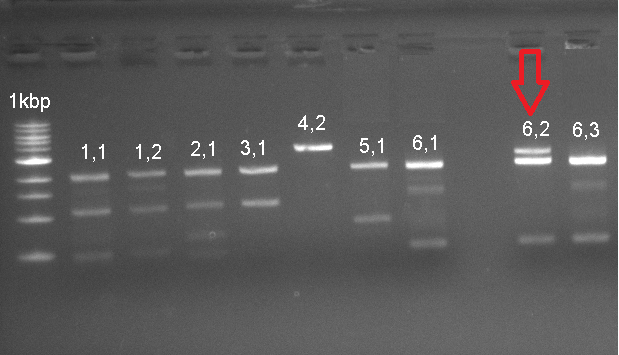 The bacteria that were transformated with G-Block 7 were cultured in 5 ml and incubated for 13 hours. After this incubation, the cultures were incubated at respective temperatures for 4 hours and were given 50uM of iPTG twice with 4 hours periouds. There were a total 5 different temperatures that the cultures were incubated in: 4, 25, 37, 42 and 50 C. The proteins in the cultures were then isolated and the protein concentrations were measured. Data on RFP concentration were acquired at 584 nm of emission and 607 nm of excitation. The acquired values were divided to the total amount of protein to acquire the following ratio. 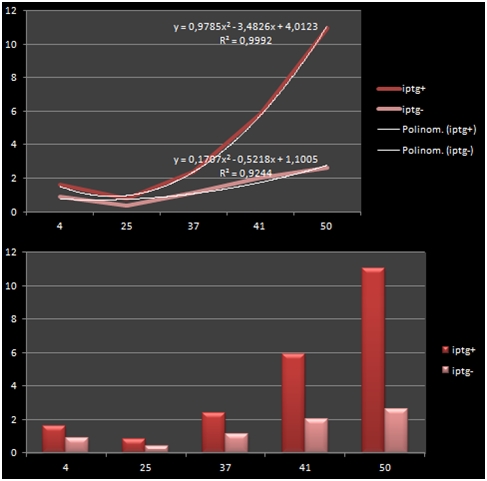 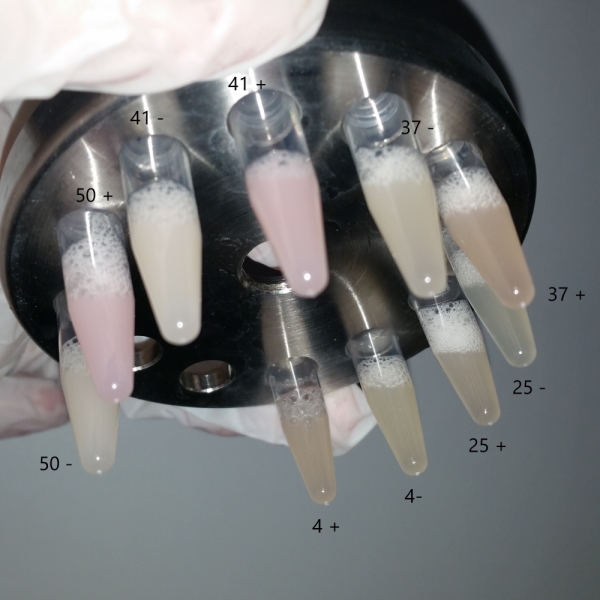