This intein assembly construct is part of the iGEM team Heidelberg 2014's strategy for cloning with split inteins. Inteins are naturally occuring peptide sequences that splice out of a precursor protein and attach the remaining ends together to form a new protein. When splitting this intein sequence into an N-terminal and a C-terminal split intein one is left with a powerful tool to post-translationally modify whole proteins on the amino-acid sequence level. This construct was designed to express any protein of interest fused to the Nostoc punctiforme DnaE C-terminal split intein. The corresponding N-terminal construct is BBa_K1362100. Upon coexpression or mixture of the N- and C-constructs protein splicing takes place and the N- and C-terminal proteins of interest are irreversibly assembled via a newly formed peptide bond.

This mechanism can be applied for a variety of different uses such as the activation of a protein through reconstitution of individually expressed split halves. See our split sfGFP experiment and the respective parts in the registry for more information. Protein splicing offers many new possibilities and we hope to have set a foundation that you guys can build on!

This part was improved upon by the UCL 2018 iGEM team by building BBa_K2842669 . This improved construct used a brighter fluorescent protein that achived higher levels of fluoresence of the reporter driven purly by the leaky expression of the T& promoter in BL21* cells(fig.1). 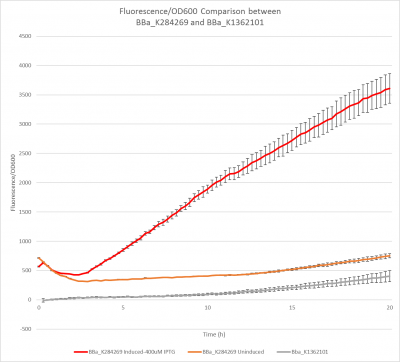 Figure 1: Comparisons between BBa K1362101 and the improved part BBa_K2842669:
By measuring fluorescence and OD600 over time with a plate reader we compared the fluorescence of the two constructs. 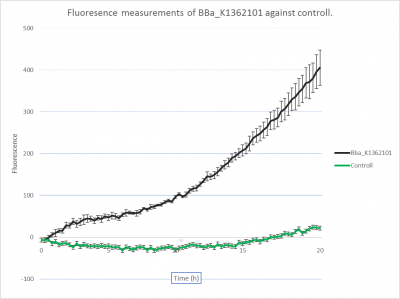