Not Released
Sample In stock
RFC: 23
Experience: Works
2 Uses
Get This Part

LL-37 is an antimicrobial peptide (AMP) from the cathelicidin family of antimicrobial peptides, isolated from the Human (Homo sapiens). It is a 37-residue helical peptide found throughout the human body, exhibiting a broad spectrum of antimicrobial activity as well as a variety of immunomodulating effects (Dürr, Ulrich H.N., et. al 2006). It has the distinction of being the first and only cathelicidin member discovered from humans, and is extremely well studied and characterized for this reason. The peptide is produced via epithelial cells as well as leukocytes in places such as the skin, gastrointestinal tract, and the respiratory tract. This AMP is is cleaved from a larger protein, hCAP-18, in a series of modifications to yield its active form (Sorensen, O.E, et. al 2001).

This part was codon optimized for E. coli using the Life Technologies GeneArt ® software program. By design, this part is Assembly Standard #23 (Silver Fusion) and contains a Methionine(atg) residue at the start of the coding region. Furthermore, this LL-37 sequence does not have any stop codons, which allows for composite BioBrick construction.

Improvement on Existing Parts (as of September 2013)

BBa_K245114 (Slovenia iGEM team 2009) - This part lacks a start codon, which would require additional design to be expressed individually. The BBa_K1162006 part improves upon this one by adding a Met(atg) residue at the beginning of the coding region. It is unclear if Slovenia's part has been codon optimized for E. coli, but our new part has been designed with this in mind by Life Technologies (see design).

BBa_K875009 (Trieste iGEM team 2012) - This part, BBa_K875009, uses the Assembly Standard #10 for both the prefix and suffix and therefore cannot be used for protein fusions, such as in cases of secretion, protein purification, or fusion proteins. This part also has a stop codon which further limits what can be added to the C-terminal end (purification tag/secretion tag). The BBa_K1162006 improves upon this part by using Assembly Standard #23 (Silver Fusion) and by removing the stop codon at the end of the coding region. Additionally, the BBa_K1162006 part was codon optimized by Life Technologies (see design).

Figure 1. The image above of protein purification fractions demonstrates that there is expression of LL-37 and WAM-1 in E. coli through GFP fluorescence (GFP is at the C-terminal end). Unfortunately, there were issues with binding to the nickel affinity column, which will be troubleshooted in future work. Figure 2. This image is an SDS-PAGE gel of the protein products from a 10L fermentation run for the LL37-spider silk generating construct using E. coli as the host organism. In the elution fraction of the gel image below, we can see a protein band at approximately 55-60 kDa, the size of the LL37-spider silk protein. From this study we have demonstrated that antimicrobial spider silk can be produced in E. coli and scaled-up. Since we also have additional AMP-spider silk constructs (see BioBricks page for a complete list), the next step would be to manufacture more of these using a similar approach to the LL37-spider silk. In future work, optimization of LL37-spider silk production will also take place.

On the basis of BBa_K1162006, we added the termination codon and characterized it.

To verify the construction of pVE-LL-37 which we generated, the digestion by BglII/EcoRV was performed by a standard protocol followed by agarose gel electrophoresis (Figure 1). 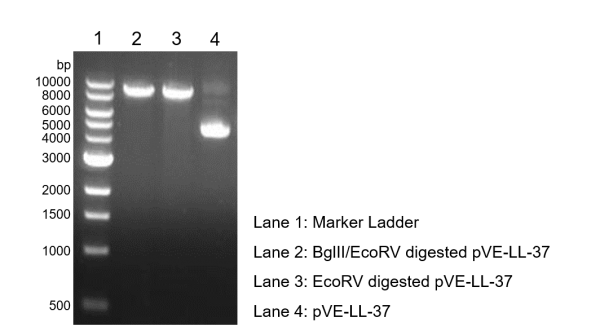 Figure 1. Digestion and electrophoresis of pVE-LL-37.

To detect the expression of pVE-LL-37 in E. coli, the constructs were transformed into BL21. Compared to the mock, there was a small size band shown in pVE-LL-37 (Figure 2).

Figure 2. Expression of pVE-LL-37. The bacteria were collected and ultrasonicated. The lysate was centrifuged and supernate was electrophoresed on the Tricine-SDS-PAGE gel, followed by Fast silver staining. The LL-37 peptide was synthesized as positive control.

To assess the candidacidal activity of LL-37, the spot assay was performed. As shown in Figure 3, C. albicans viability after LL-37 treatment was visually compared with that of control cells (no LL-37 treatment). We found that cell viability was more sensitive to LL-37.

Figure 3. Candidacidal activity of LL-37. C. albicans were collected and suspensions were resuspended to 105 cells/mL. 10 µL C. albicans suspension and 20 µL sterile BL21-transformed bacteria were gently mixed. After a 10 min incubation, the mixture was spotted onto the SDA agar plates. Cell viability was detected after incubation at 30℃ for 18 hrs.

To further validate the candidacidal effect of LL-37, C. albicans suspensions were incubated with it. After incubation, LL-37 caused an immediate increase in PI fluorescence indicates that LL-37 can kill C. albicans (Figure 4). 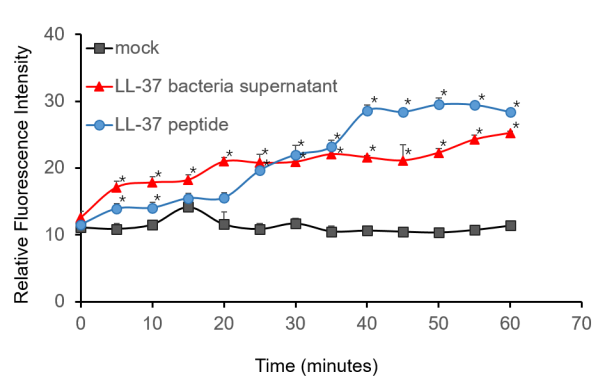 We successfully characterized LL-37 and demonstrated its ability to kill C. albicans from multiple angles.

In order to fit the project and guide the experiment, our research decided to depict the characterization of LL-37 protein- an antimicrobial peptide.

The plasmid we designed consists of T7 promoter, lac operator, RBS, LL-37 coding sequence, His tag and T7 terminator, which are arranged in an order on a pET28 backbone. We aim to induce the transcription of the downstream LL-37 by adding the IPTG to initiate the expression. The protein will then be purified and antibacterial activity was tested by culturing the Salmonella enterica subsp. enterica (ex Kauffmann and Edwards) Le Minor and Popoff serovar Typhimurium with our purified LL-37 and measuring the OD600 to reflect the bacteria growing condition.

OD600 itself or the growing rate is expected to descend, which represent that the growth of bacteria is inhabited.

1. Plasmids Construction: LL-37 is constructed using primers by overlap extension PCR. The constructed fragment is ligated to the target site in pET28 by PCR and homologous recombination. The correct construction is confirmed by sequencing.

2) When the optical density of the cultured bacteria reached approximately 0.6, IPTG was added to the final concentration 50mM. And the bacteria were induced at 18℃ overnight. The harvested bacteria are resuspended with a binding buffer (Sangon Biotech, Shanghai, China), and then the bacteria are lysed by ultrasonication. Purification is performed following the instructions of Ni-NTA SefinoseTM Resin (Sangon Biotech, Shanghai, China).

6) All experiments above are carried out in 3 biological replications.

Compared with the control groups, LL-37 do have antibacterial effect with the OD600 has an obvious lower increase. We successfully characterized LL-37 and demonstrated its ability to kill S. Typhimurium SL1344. The results of our experiment are shown in the figure below (Figure 1). 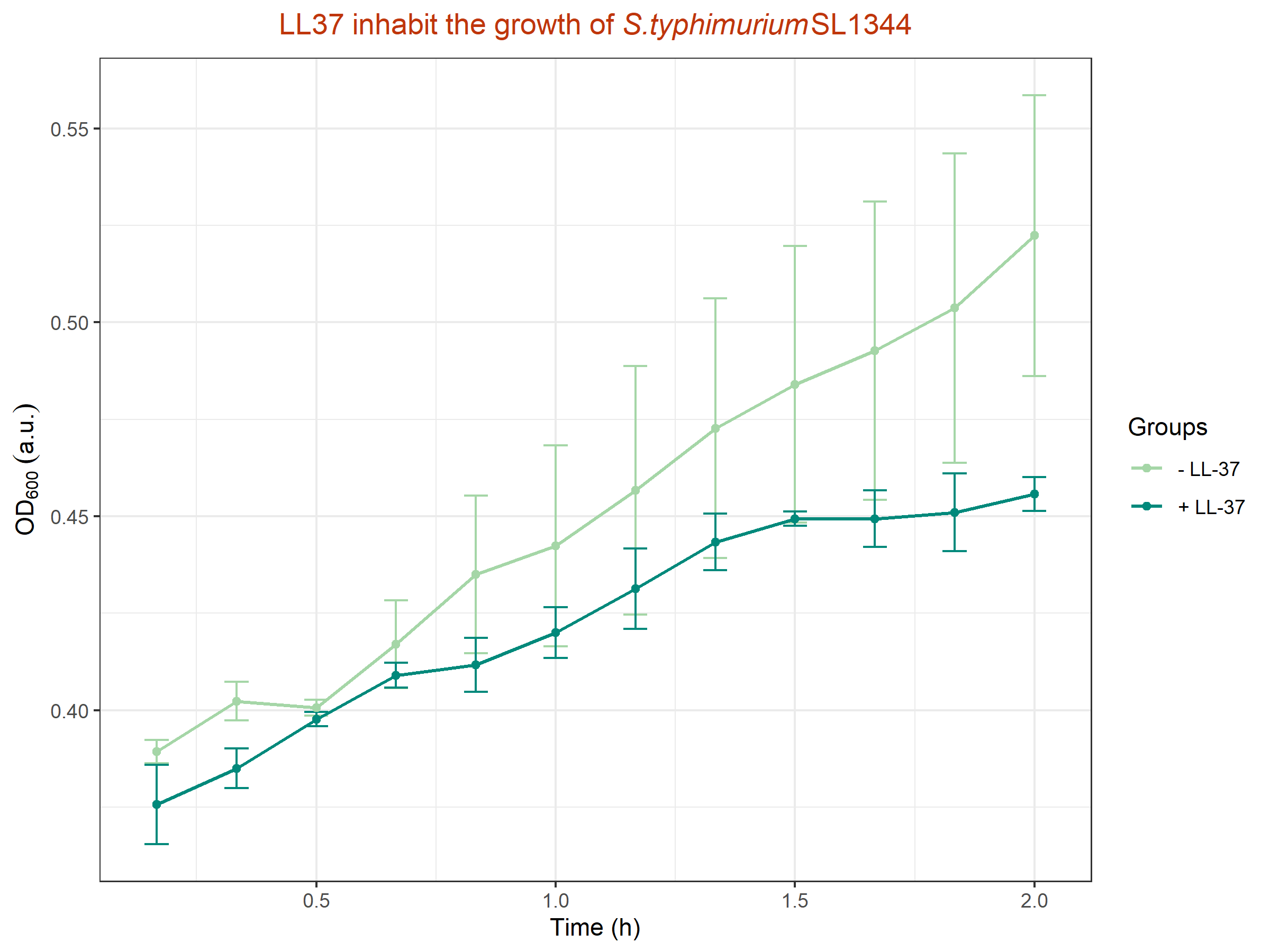 Figure 1. OD600-Time curve of Salmonella Typhimurium SL1344 in the presence or absence of LL-37.