Not Released
Sample In stock
Experience: Works
1 Uses
1 Twin
Get This Part

We cloned the constitutive promoter J23104+ RBS B0034 upstream of the native phaCAB promoter and the phaCAB operon. Thus this part consists of a hybrid promoter system, which functions as an optimised bioplastic producing operon. 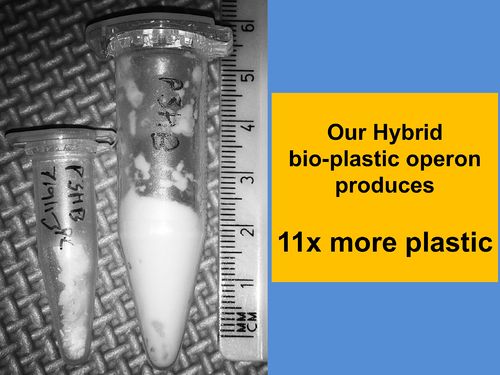 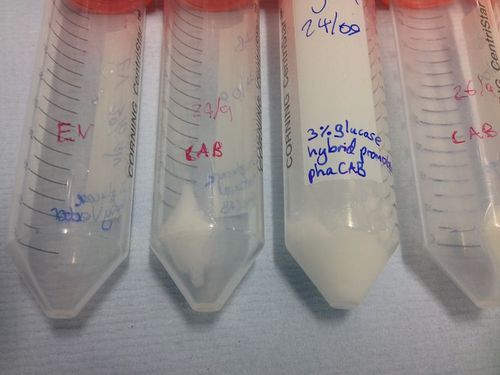 Streaking the bacteria on Nile Red plates cannot be used to accurately decide the difference between P3HB production due to the effect differing thicknesses of cell layers will have on fluorescence intensity. We imaged the cells using the fluorescent microscope to qualitatively understand how much P3HB is produced per cell. As indicated by other authors, we saw that P3HB is found in localised granules within the bacteria. Empty vector containing cells show little fluorescence. In those that do, the staining is qualitatively different than in the phaCAB containing strains. Nile Red is also used as a lipid stain and this is indicated by its staining of the membranes of EV cells. In contrast, in phaCAB containing cells, staining is restricted to points within the cells.

Each fluorescent image was created by exciting the stain at 530nm for 100ms. Despite this standard treatment of samples the intensity of fluorescence produced by the cells containing the hybrid promoter is greater than from the constitutive ones. This could indicate a difference in the strength of the promoters which lead to phaCAB expression and therefore the amount of P3HB produced. The images also suggest that not every single E.coli is stained. This may be due to the conditions in which the cells were grown or may be dependent upon the stage in the lifecycle of the E.coli. 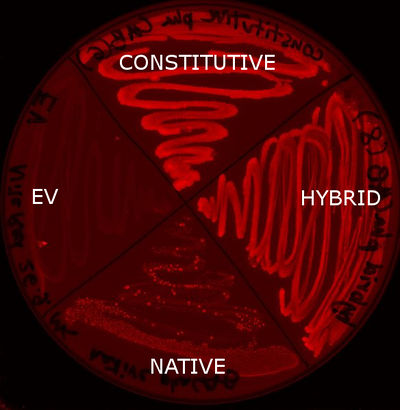 phaCAB P(3HB) synthesis constructs transformed into MG1655 Strains were grown on Nile red plates, which stain the PHB strongly and fluoresce in presence of PHB. On the left are MG1655 cells with an empty vector (no fluorescence; no plastic), at the bottom is the native promoter (i.e. low fluorescence, some plastic). At the top and right we have our constitutive and hybrid promoter (respectively), which both show high expression and thus fluoresce very clearly. Imperial iGEM data

Conclusion: The red staining indicates the production of P(3HB). More importantly our new Biobricks hybrid promoter phaCAB BBa_K1149051 and constitutive phaCAB BBa_K1149052 produce more P(3HB) than the native phaCAB operon To find more information about the reasons for improvement, the design and methods of changing the promoter on Imperial iGEM wiki: Module 1: Waste to bioplastic MG1655 in LB with plasmid EV and the native, constitutive and hybrid promoters for phaCAB. The plasmids all show similar growth curves in LB for all 3 promoters. Indeed this is confirmed by an ANOVA test, which shows no significance in terms of growth difference the constructs (F 3,24 = 0.3573, p < 0.7843). Growth was at 37°C with shaking over 6h. Error bars are SEM, n=4. Figure made by Imperial College London 2013 iGEM.

Glucose as a sole carbon source in M9S 3HB sole carbon source growth in M9S with P3HB synthesis pathway genes. The 3 phaCAB promoter constructs are represented with native phaCAB, constitutive phaCAB and hybrid phaCAB. In addition bdh2 was tested to see whether its presence increased growth for the cells. This was completed with 3 3HB concentrations - 100 μM, 10 mM and 100 mM. ANOVA analysis shows that there is no significant difference between any of the constructs (F 4,10 = 0.1875, p < 0.9396). Data points show final time point after 6h growth for each concentration. Growth was at 37°C with shaking over 6h. Error bars are SEM, n=4. Figure made by Imperial College London 2013 iGEM. phaCAB promoter constructs in M9S with acetoacetate as sole carbon source. Empty vector shows the least growth of all the constructs of MG1655. The best performing construct is hybrid phaCAB. According to ANOVA analysis, there is no statistical significance between the different phaCAB promoter constructs or EV (F 3,12 = 3.086, p < 0.068) with regard to growth on acetoacetate as a sole carbon source. Data points show final time point after 6h growth for each concentration. Growth was at 37°C with shaking over 6h. Error bars are SEM, n=4. Figure made by Imperial College London 2013 iGEM. Hybrid promoter in phaCAB growth in sole carbon sources under M9S. MG1655 E. coli transformed with native phaCAB compared to empty vector for sole carbon sources. The trends observed show that there are differences between EV and phaCAB for glucose (p = 0.9715), acetoacetate (p = 0.0176) and 3HB (p = 0.8276). Indeed, hybrid phaCAB grows exceptionally well on acetoacetate, even at low concentrations compared to empty vector which only grows well at 100 mM 3HB. ANOVA analysis concluded that null hypothesis, "The sole carbon sources tested have no effect on growth" must be rejected (F 5,12 = 14.13, p < 0.0001). This shows that there is a difference between individual carbon sources. Data points show final time point after 6h growth for each concentration. Growth was at 37°C with shaking over 6h. Error bars are SEM, n=4. Figure made by Imperial College London 2013 iGEM.

Conclusions: For native promoter and empty vector, there is no significant difference in growth for the same sole carbon source. There is a significant difference however between the different sole carbon sources used. A similar picture is observed with the constitutive promoter for phaCAB. By far, the most interesting result is seen with the hybrid phaCAB promoter. There is a very distinct difference between empty vector and the hybrid, whereby the hybrid phaCAB grows very well with acetoacetate up until 100 mM. 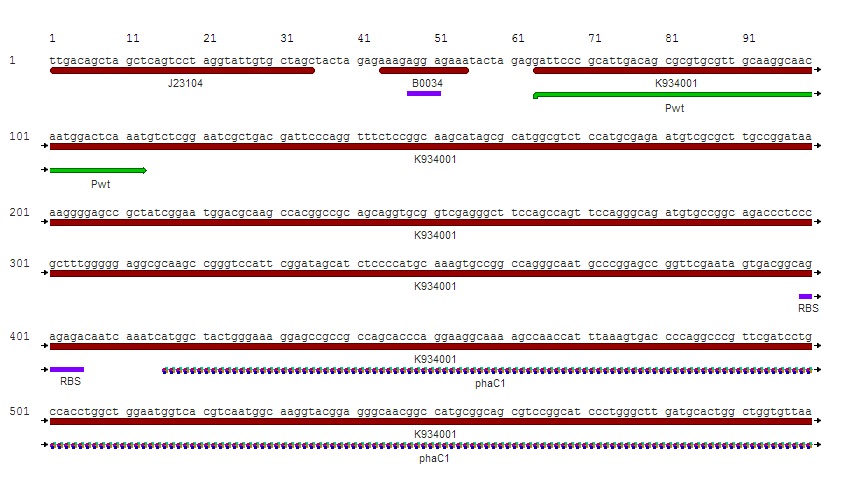